Loser is a male contestant in Battle for BFB.

He first appeared in "Puzzling Mysteries" as an asset. Beige cubes were sometimes used to represent the losers in the first season, hence his name "Loser". He is an extremely popular character, despite his name. His team, The Losers, was named after him. Everyone respects him, and he respects them back.

Loser competed as a member of The Losers! and was eliminated in "The Liar Ball You Don't Want". However, in "The Escape from Four", he rejoined the competition by escaping Four by using the stack that the other eliminated contestants used to stack up, and then entering Spongy's holes and jumping out.

Loser competed for the Have Nots team until "Let's Raid The Warehouse", where he got eliminated again.

He speaks in a very wheezy and slightly low-pitched voice.

Loser is an ivory-colored cube with a light scarlet outline, followed by a thick pale, light grayish gamboge outline. He usually appears from the front or the side, and he is rarely seen from the back.

Despite being named "Loser," Loser is extremely popular and strong with his friends, and his popularity appointed him the leader of his team, The Losers.

He is shown to be a respectful character who everyone likes, and he has never been directly rude to any contestant. He is shown to have incredible strength in "Getting Teardrop to Talk," as he lifts a massive basket to save most of his teammates. He is always very helpful and helps out his allies and his team when they need it.

Unfortunately, everyone has high expectations for him. However, in The Liar Ball You Don't Want, Loser did lie when he said that he used to play with poppers "all the time," even though they had just been invented, according to Fanny. Because of Fanny, there seemed to be a controversy over his reputation. Despite this, Loser remained kind and respectful, and still was when he said his final words.

In "X Marks the Spot", Loser is shown to absolutely dread the thought of his fans doubting him.

In Battle for Dream Island: Official Character Guide, it was revealed that Loser has more fans on Earth than people, showing his extreme popularity.

Loser is anything but a loser. This ivory-colored cube is without a doubt the most popular contestant, which is why his teammates named him the leader of The Losers!

Loser is the most charitable and kind person ever! He often prevents fights and tells people things that make people feel good. He has saved people's lives from heavy baskets and is so skilled at playing with toys that he can play with them before they are even invented. He also likes to watch Cake at Stake, even if his team isn't up for elimination.

Did You Know?: Loser somehow has more fans on Earth than there are people.

A flashback in "Today's Very Special Episode" shows a group of unknown objects kicking a paper mâché version of Loser. However, Loser may have been inside and had broken free from the paper mâché sometime after the flashback and before BFB (evident in the closed captions as it says "Loser whimpering"). This may mean Loser wasn't always treated like a winner.

In "Getting Teardrop to Talk", Loser makes his first appearance when Pencil accuses Naily of killing Bubble (even though Bell was the real suspect) by telling her to stop, Everybody starts screaming "Loser!" When he appears, he then tells Pencil to apologize. Later, during team selection, Firey, Needle, Coiny, and Pin approach him and convince him to join his team. Clock, Cake, and Eggy join shortly after. When it comes time to name the teams, Firey suggests calling it "The Losers," before everybody begins chanting his name. In the challenge, his teammates throw Pin and cause the basket to fall on everybody but Loser and Eggy. Loser then lifts the basket off of them, and on to Eggy. Loser's team wins when Clock uses his clock hands to send the basket flying to X.

In "Lick Your Way to Freedom", Loser is shown licking a jawbreaker, freeing Gaty, placing Beep up for elimination.

In "Why Would You Do This on a Swingset", Loser comes up with the strategy of using Daylight Savings to speed up Clock when being used as a fulcrum.

In "Today's Very Special Episode", Loser appears near the end of the episode with Eggy, standing next to a paper-mâché sculpture of Four (with X stuck inside). Eggy acts surprised when A Better Name Than That's drawing got a higher score than their sculpture, to which Loser replies that he never liked pâper-maché. The episode cuts to a flashback where either a paper-mâché sculpture of Loser or Loser encased in paper-mâché being kicked by several unknown people whilst they laugh mockingly. This could imply that Loser was bullied at some point in the past.

In "Four Goes Too Far", at Cake's request, Loser shields his team from the twinkle of contagion using one of X's baskets (with X hiding inside). During Coiny and Pin's moment on the cliff, Pin is worried that the team is so Loser-centric, and wonders how they would function if he got eliminated. Coiny remains confident that they will still be able to manage themselves because Pin is a heroic leader. With a few seconds left in the challenge, Bell breaks the basket and gives the twinkle to Clock, putting the Losers up for elimination.

In "The Liar Ball You Don't Want", Loser walks up to the others playing with poppers. He says that he used to play with them all the time, but Fanny calls him out for "lying," as they were just invented an hour prior. This causes major controversy among objects whether or not to hate him because of that "lie". After coming to the elimination center and requested by Donut to spread out for being too close to him, he is in the bottom two. Donut then reveals to Loser that he is eliminated, causing The Losers and the recommended characters to gasp in shock. For elimination, he is sealed in the Liar Ball, which is then used for the contest. Later at the end, he is sent to space by Remote's explosion, where he gives his elimination speech that was cut off before. He appears again in Questions Answered, but still in the jawbreaker.

In "Enter the Exit", he is still in the jawbreaker, reading Donut's Diary. However, he is put inside Four. He later stumbles into the EXIT and is one of the many EXITors up for rejoin. After Roboty insults Four, he throws the Liar Ball at him, causing Loser's rejoin audition to be, "Huh? What was that?".

In "Get to the Top in 500 Steps", Leafy and himself were in the top two for rejoining. Leafy tells him that she'll be happy with either of them joining. Loser, still in the jawbreaker and unable to hear, is continuing to read Donut's diary. He asks if something in the diary is a cryptic message, and this sentence is what Leafy thinks is his reply to her previous statement. He doesn't get enough votes to join (5,830 compared to Leafy's 13,835), so Four puts a paper in the jawbreaker so Loser can see how much votes he got. Not understanding what is going on around him, he is confused seeing the number "5-8-3-0," which is the number of votes he got.

In "Return of the Rocket Ship", Cake attempts to suggest that the Losers should jump down a hole dug by iance, but Eggy points out the flaws of the choice and suggests digging their hole is more honorable, escalating to "spiritual connections" with Loser, resulting with Eggy claiming her spiritual connection is so strong, she bleeds Loser's color when cracked, and that Loser stands for independence, perseverance, and dignity. When she says this, the camera zooms into the sky, and Loser is then shown in the Liar Ball saying, "I could go for some chicken nuggets right now...".

In "The Escape from Four", at the beginning of the episode, Loser finishes reading Donut's diary, and decides he needs some new reading material, and breaks free of the Liar Ball. Loser decides to escape the EXIT along with the other Exitors. Since Stapy is too heavy, Loser climbs on top of the stacked objects that the Exitors were using to escape. Loser tells everyone that Spongy's holes are stretchy, so they can climb through. Loser manages to be the only one to reach the surface without difficulty and rejoins. After jumping out from Spongy's body, Loser tells his friends that he missed them, before Four begins to start sucking the Exitors back in. Loser then helps with trying to pull them out. After only pulling out Spongy, they both start running as Four chases them in order to send them back to the EXIT. Later, Loser switches to compete on The Power of Two, at first wanting Two's powers, but switches back to Four when the prize becomes A BFB. Loser becomes one of the fourteen contestants to continue competing on BFB. He, along with Four and his thirteen fellow contestants, are transported by Two to an unknown area to compete.

In "X Marks the Spot", Loser is placed on the X Colored Team. To get X, he spits on the ground, saying X would have to mark it. Loser ends up being proven right as X lands on his saliva spot, thanks to the Four Colored Team, making his team safe.

In "Take the Tower", Loser comes up with another strategy for his team. Using Spongy's friendship bracelet and Firey's Coiny-slapping glove, he manages to create a bridge between the two towers. His team ends up losing the contest when their tower breaks apart.

In "How Loe Can You Grow?", is safe with 4,738 votes. Loser feels bad for Spongy getting eliminated and tells him that he'll take care of his spaceship, Spongy then takes off. In the contest, Loser helps Firey and Flower find a laser in Spongy's spaceship, then with Firey, does a drumroll. The laser causes the sun to grow, making his team win. Loser then gets in the spaceship with his team to pour ice on the sun. but burns to death when they get to close to it.

In "A Taste of Space", Loser is recovered by Four. In the challenge, he says that if they run really fast in place, the earth will rotate. The team does this to make it nighttime, helping to cool X. His team ends up losing the contest, since they had less points and failed to keep X cooled down for good.

In "Let's Raid The Warehouse" Loser, along with his team, is up for elimination. Flower tells Loser they need more votes than the entire first season of BFDI in order to be safe. Loser is not worried about mustering up enough votes to be safe, as he assumes his supporters will vote for him to be safe. This is proven wrong when Four reveals the votes to Loser which shows that, despite his popularity with other contestants and viewers, Loser received the fewest votes, thus eliminating him for the second time. Loser, being proven wrong, is left speechless and can do nothing but babble incoherently as he is clearly left hurt. He continues to babble when he is being transported to BRB. Loser can be heard still babbling in the stinger ending.

In "Who Stole Donut's Diary?", Loser can be seen spinning in the Big Rotating Building with the other eliminated contestants. 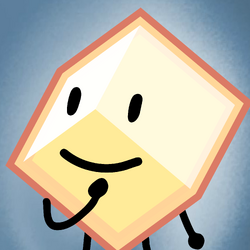 Characters
Retrieved from "https://battlefordreamisland.fandom.com/wiki/Loser?oldid=2461876"
Community content is available under CC-BY-SA unless otherwise noted.