Magma, also referred to as lava, is a reoccurring substance in Battle for BFDI.

Magma makes its first appearance in "Don't Pierce My Flesh", as an obstacle within the Volcano. While Firey easily swims through the substance Leafy, Flower and Bubble have trouble traversing, before realizing they can use Spongy as a platform.

The magma makes a brief reappearance in "Hurtful!" Where it is once again present in the volcano. It is used by Bubble to kill Flower after a heated discussion with Leafy.

In "Insectophobe's Nightmare", Firey has a lava fall on his Ferris wheel.

Molten lava makes its first BFB appearance in "Getting Teardrop to Talk", where Bleh traverses a sea of molten lava to retrieve X's Basket. The fiery goop claims the lives of all but Saw and Dora.

Magma reappears in "Don't Dig Straight Down" when Spongy accidentally bursts a crack through a lake in the "Buried Forest, Deciduously Insulated", and the magma, begins to flood everywhere, eventually killing most of the contestants.

It is still present in "The Four is Lava", where it played a part in the challenge. The surviving contestants had to get to Four while avoiding falling into the lava. Later, Flower finds a remote that when pressed, drained all of the lava. The lava drains down Roboty's Waterfall and into Four’s eyeball, where it squirts out with Woody and burns Gaty.

In "The Escape from Four", Two pulled a large amount of magma out of Yoyle Mountain, plays with it, and turns into a shape of 2. Bottle got killed after Two accidentally filled her with lava.

In "The Game Has Changed", Firey places both a lava and water fall on his Ferris wheel so that he and Leafy can both ride it.

In "The Tweested Temple", while everyone else got water, Leafy and Woody get lava as a prize for being safe.

In "Chapter Complete", lava from the dispenser from Firey's Ferris Wheel can be seen in the Grand Cake.

In "The Worst Day of Black Hole's Life", lava is used by Two to create a timer for the competition, similar to the Cloud Timer that Four can summon. 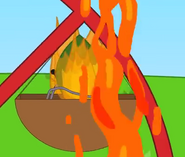 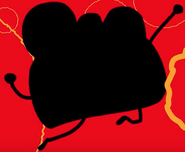 Lava coming from the lava waterfall bucket from Firey's Ferris Wheel in the Grand Cake
Items
Community content is available under CC-BY-SA unless otherwise noted.
Advertisement