Marker is a male contestant on Battle for BFDI and The Power of Two.

He is one of the former 30 recommended characters that could have joined Battle for Dream Island in episode 17, but he only got 9 votes and was sent to the LOL.

In Battle for Dream Island Again, he got 109 votes, which was not enough, so he was sent to the Tiny Loser Chamber.

In Battle for BFDI, Marker competed on Free Food until the split in "The Escape from Four," when he joined Two's new show.

In Battle for Dream Island: The Power of Two, Marker currently competes on Death P.A.C.T. Again.

Marker's body is mostly white, but has a purple oval symbol on his side. He has a purple cap which is the same size as the rest of his body.

BFDI 17 (one of the 30 recommended characters)

Marker is a humorous and cheerful character who likes playing weird games such as Toss the Dirt and Eat the Dirt. He doesn't seem to be very intelligent, as he didn't know how to play Rock Paper Scissors until Foldy taught him in "Today's Very Special Episode". He can also be a bit of a devious trickster sometimes, as seen in "You Know Those Buttons Don't Do Anything, Right?" when he presses the "up" button and keeps running up to get in The Strongest Team on Earth's way. He has been shown to get mad, as shown when he wanted to "punish" Lollipop for not being Foldy inside a jawbreaker or when he partakes in attacking Two at the end of TPOT 1 for they did not explain the rules.

Marker is a purple washable marker. He likes to write messages on his arms such as "IMMUNITY GOES TO ME!"

Marker is good-natured and cheerful. He also loves to play games! His favorite is Toss the Dirt, but he's willing to play plenty of other games with his friends Foldy and Stapy. He's not so good at Rock-Paper-Scissors, though, because he keeps getting his fingers twisted into house-shapes. And 4-shapes. And hecatonicosahedroid-shapes.

Did You Know?: Another thing Marker likes to write on his arms is "GAMER."

In "Half a Loaf Is Better Than None", a Marker runs into a vat of hydrichloric acid.

In "Vomitaco", Marker appears as a background character.

In "The Reveal", Marker reveals his tattoo in his audition to join the game. The tattoo read "Immunity goes to ME!". However, Marker didn't make it into the game, as he only got 9 votes in "Reveal Novum", along with Taco and Dora, and was sent flying into the Locker of Losers.

In "The Glistening", Marker appeared orange. Marker was also recommended by TheRyanExperiment and was one of the RC's to vote for Ice Cube.

In "Return of the Hang Glider", Marker variants watch the final Cake at Stake.

In "Yeah, Who? I Wanna Know", Marker only received 109 votes and placed 41st, which wasn't enough to join the game and he was flung to the LOL once again.

In "Welcome Back", Marker was given a chance to join IDFB but didn't get enough votes.

In "Getting Teardrop to Talk", Lightning asks Marker (along with Stapy) if they want to be friends. Marker declines and then asks Stapy if he wants to play toss the dirt with him. They both start digging up dirt. Marker follows Stapy and joins Free Food. During the challenge, Bell is concerned about their chances of winning when Foldy dies, stating no one else could get up to the basket. Marker then tells Bell to turn around to an angry Puffball.

In "Lick Your Way to Freedom", Marker yells at Four demanding for Foldy to be recovered. Later, Marker and Stapy "punish" Lollipop to death due to her not being Foldy.

In "Why Would You Do This on a Swingset", Marker asks Puffball if she wanted to play Toss the Dirt with him. Puffball agrees after calling the game "dirty". This, however, does not happen as Fries tells Puffball to do the challenge instead.

In "Today's Very Special Episode", Marker asks to play rock paper scissors with Foldy and Stapy. He says he doesn't know how to play, but Foldy teaches him. He's told that whoever farts the most gas wins. He doesn't think that's how it works, but Stapy gets him to play anyway. Marker points his finger, which is an illegal move. He then plays a house, then a hecatonicosahedroid. He then plays 4 which Foldy and Stapy freak out about. The 4 grows out of Marker's hand and turns into Four. In the challenge, Marker presents the year's hottest look, which caused Four to shoot out some hearts at his team. They get first place.

In "Fortunate Ben", Marker gets trapped inside his team's paper plane by Stapy which causes them to fall out of the sky. As they fall, Marker tells his teammates that they have to slow their plane down. His team manages to win thanks to Stapy using his staples to break the landscape.

In "Four Goes Too Far", Marker (along with the rest of Free Food) looks away from Pen when he has the Twinkle of Contagion. Pen nearly managed to get Marker to turn around when he says he has some tossable dirt, but Fries stops him. Marker was avoiding Pen at the start, but got tricked into looking at him when started running the other way. He loses the twinkle when

looks at him from space.

In "The Liar Ball You Don't Want", Marker is in the group of characters who greet Loser at the beginning. when Lightning zooms in on Donut too far with Camera, Marker believes Donut is a vampire. Lightning zooms out and can see him, but Marker says he still has evidence.

In "Questions Answered", Marker can be seen moving from the moon to earth. His team loses the challenge because of Stapy and Puffball's cheating.

In "This Episode Is About Basketball", Marker asks to play "eat the dirt" with Stapy, which Stapy declines. Coiny then offers Marker some dirt to eat, starting the intro. At the start of Cake at Stake, he is seen with Coiny's dirt fully eaten. When X gets "promoted" to host, Marker, along with the other alive members of Free Food affirm with his regular cake choice. During the contest, Marker wins for his team when Yellow Face tells him to play toss the balls, which turns into toss the dirt once the balls are in their team Basket. Fries tells Marker that he can stop digging.

In "Enter the Exit", Marker played the number four claiming that he knew how to bring Four back. However, this did not work (since Four was dead). Firey Jr. noticed this and called Marker an idiot after he had no proof that this had worked "last time", due to Stapy and Foldy being absent.

In "What Do You Think of Roleplay?", Marker was seen smiling at Foldy with Yellow Face. Ruby then came and unfolded her, shocking Marker.

In "Return of the Rocket Ship", after Yellow Face started to advertise the Fork Attractant, Marker was intrigued, along with Bell and Lollipop, stating that he wished nothing more than to watch it.

In "Don't Dig Straight Down", Marker's only role is explaining to Fries (while using his body to draw a simple diagram) that Four once said "You don't need frills to make a feast for the eyes," encouraging Fries to give fake emeralds to Four.

In "The Four is Lava", Marker is recovered, as he died offscreen between the events of the previous episode.

In "The Escape from Four", Marker is first seen walking with everyone else to watch Four struggle at sucking up Spongy. Marker can also be seen helping with pulling the eliminated contestants out of Four. He later switches to Two's show, TPOT, after seeing them turn the sun into a spiky ball so that they could hit Four with it.

In "X Marks the Spot", Marker is in the crowd of characters who gasp when X is snatched away by the Four-Colored Team.

In "You Know Those Buttons Don't Do Anything, Right?", Marker asks what's wrong with prime numbers. He later tries joining Foldy's team, but is flung away by Bell. He lands next to Lightning and teams up with him, with Lightning being bothered with how he now wants to be friends after rejecting his offer in BFB 1. They both join Death P.A.C.T. Again. During the challenge, he informs the team they can't use the elevator after it breaks. He also suggests using Fanny to propel themselves onto the building, but she's not strong enough for that. Remote gets an idea and uses him to visualize her plan. When Pie says that she's vandalizing the wall, Marker says she isn't and that his ink is washable. As Remote carries her team up the stairs, Marker gets dropped, and he presses a button on the elevator before running back up. This causes the elevator with The Strongest Team on Earth. to stop at that floor, but they still beat Death P.A.C.T. Again, meaning Marker and the rest of the team are up for elimination. He stomps on Two when the contestants start attacking them.

In "The Worst Day of Black Hole's Life", Marker receives a paper clip from Robot Flower, which he can be seen playing with as his team tries to get a battery. During Cake at Stake, he is in the bottom two with Pie, and is the last one safe, receiving 6,095 votes. He goes off to play video games while Two begins the intro sequence. During the challenge, when Black Hole asks how he can help, Marker says "You suck, don't you?", which Black Hole takes offense to. Fanny clarifies that he meant that he could use his suction ability to help. This backfires when Black Hole accidentally sucks up all of Death P.A.C.T. Again's blocks. Marker agrees with Tree's idea to steal other team's blocks, and he and Fanny take Rocky from The S! when they see him vomit blocks. Marker panics when he sees Remote get killed in a puddle of battery acid, and leaves Rocky behind at the Recovery Center after he kills Remote by vomiting acid onto her. Marker and Tree then stay behind to build their team's stack. When Teardrop destroys one of their blocks, Marker attempts to use his paper clip to keep the stack from collapsing. This fails, and the paper clip ends up getting launched into the back of Robot Flower's head. Marker suggests targeting Teardrop as an act of revenge, leaving Tree as the only member to rebuild their stack. Teardrop starts firing at his team, killing Fanny first, forcing the rest to take cover behind a fence. Lightning saves Marker from Teardrop by pushing him down, and Marker avenges Lightning's death by wrestling the laser gun from her and taking it by biting her arm. Teardrop then fires a laser from her finger, knocking Marker over, allowing her to take back the laser gun and finish him off. Tree recovers Marker before the challenge ends, and their team places 4th overall, with five blocks stacked. 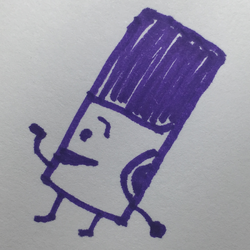