< Marker
View source
watch 02:56
Doctor Strange in The Multiverse o Madness - The Loop
Do you like this video?
Play Sound

This is a list of Marker's relationships and interactions with the other contestants.

Marker is fun, cheerful character who likes to play games with the other contestants. He is usually very passive, but will sometimes show a more aggressive side when his closest friends are gone.

In "Getting Teardrop to Talk", when Bell says that no one on their team would be able to get their basket to X after Foldy was killed, Marker tells her to turn around to Puffball.

However, in "You Know Those Buttons Don't Do Anything, Right?", when Marker says he'll join Foldy and her team, Bell is disgusted and throws him away despite the fact that they competed on the same team in the previous season.

In "This Episode Is About Basketball", after Stapy declines Marker's game of eat the dirt, Coiny appears with a plate with dirt saying "Hey Marker." At the Cake at Stake, Marker can be seen munching on the dirt Coiny gave him.

In "The Liar Ball You Don't Want", when Donut doesn't appear on Camera, Marker suspects Donut of being a vampire, but Lightning reveals that he was only zoomed in on Donut's hole. However, Marker continues suspicious and says that he "still got other evidence".

The two haven't interacted directly but they are assumed to be friends as they don't mind each others company and appear together in several group shots of the team.

In "You Know Those Buttons Don't Do Anything, Right?", when Marker asks what's wrong with the prime number of contestants, Fanny tells him that they can't be divided equally. During the challenge, he suggests using Fanny to propel their team up.

In the stinger ending of "A Leg Up in the Race", Marker is one of the characters that Firey set on fire.

In "Enter the Exit", when Firey Jr. says that they need to bring Four back, Marker tells him he knows how to and throws Four with his hand. When nothing happens, Marker assures Firey Jr. that it happened last time. Firey Jr. in turn calls him an idiot and Marker tries to tell him it's true.

Status: Enemies, on Firey Jr.'s side 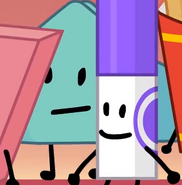 In "Lick Your Way to Freedom", Marker yells at Four to bring Foldy back.

In "Today's Very Special Episode", he throws Four in a game of "rock, paper, scissors", who to his horror physically appears from hand.

In "Enter the Exit", Marker throws Four in order to bring him back, this doesn't work because Four was dead.

In "Four Goes Too Far", Fries stops Marker from getting the twinkle from Pen.

In "This Episode Is About Basketball", Fries tells Marker that he can stop digging after their team was safe.

In "Return of the Rocket Ship", Marker frowns when Fries tells everyone to stop marveling over Yellow Face's ad.

In "Don't Dig Straight Down", when Fries stops Foldy from turning in the fake emeralds to Four because of Four possibly feeling cheated, Marker explains how Four would be fine with trash because of a line he said over a year ago. This is enough to get Fries to change his mind.

In "The Glistening", Marker votes for Ice Cube to be eliminated. This is only because everybody else was doing so.

In "Getting Teardrop to Talk", when Lightning asks Marker and Stapy if they want to be friends, Marker says "Neh".

In "The Liar Ball You Don't Want", when Lightning can't see Donut on Camera, Marker suspects it's because that Donut is a vampire.

In "You Know Those Buttons Don't Do Anything, Right?", Marker asks Lightning if he wants to be friends, to which he responds, "Oh, now you're interested?" The two then join Death P.A.C.T. Again together.

In "Lick Your Way to Freedom", Marker wanted to find Foldy in a jawbreaker. However, upon opening a jawbreaker, his team had found Lollipop. Marker was angry because he wanted Foldy instead, so he and Stapy "punish" her.

Marker is shown to be a fan of Loser in "The Liar Ball You Don't Want", as he yelled his name in a crowd of other characters when Loser appeared at the beginning.

At the end of "Questions Answered", when Match is bragging about her team being safe, Marker and Eraser are looking at her, likely upset that she made them lose.

In "Four Goes Too Far", Marker almost turns to look at Pen, who has the twinkle, when he says that he has some very tossable dirt. Later, Pen manages to give the twinkle to Marker who says "Dangit!"

In "You Know Those Buttons Don't Do Anything, Right?", Marker asks if they could use Fanny to propel their team up, but Pie tells him she isn't powerful enough. When Pie says that Remote is vandalizing the wall with Marker's ink, he tells Pie she isn't because he's washable.

In "Why Would You Do This on a Swingset", Marker asks Puffball if she wants to play toss the dirt.

In "You Know Those Buttons Don't Do Anything, Right?", he is used by Remote in order to visualize her challenge strategy.

In "What Do You Think of Roleplay?", Marker is shocked when Ruby unfolds Foldy.

Marker and Stapy are shown to be very close friends. They would often be seen together before Stapy's elimination.

In "You Know Those Buttons Don't Do Anything, Right?", Marker stomps on Two because they didn't explain one of the rules loudly.

In "This Episode Is About Basketball", Yellow Face tells Marker to toss the balls, Marker happily does so, winning for their team.

In "What Do You Think of Roleplay?", Marker and Yellow Face stand together while smiling at Foldy.

In "This Episode Is About Basketball", Marker tells X that it's fine that he brought a regular cake for Cake at Stake.

In "The Escape from Four", Marker helps with pulling the eliminated contestants out of Four.

In "You Know Those Buttons Don't Do Anything, Right?", he tells his team that they can't use the elevator.