"The Four is Lava" (as a recommended character)

Makes the person who uses it lose 10 points

Maroon balls are a repeating joke in the first season of BFDI, due to their penalty and having a very similar color to red balls. Maroon balls are first seen in "Don't Lose Your Marbles". They are similar to but are not red balls, and are commonly confused as red balls among contestants. Maroon balls will cause a person who hands them in as a red ball to lose 10 points from their score as a penalty. They are most likely owned by the Announcer.

In "Don't Lose Your Marbles", the contestants must locate red balls, however, whoever brings maroon balls to the Announcer loses 10 points. Match brings a maroon ball to the announcer, and goes down the ranks due to the 10 point penalty she is given. Leafy found a maroon ball, without knowing it was a maroon ball, and gave it to Ice Cube, causing her to lose 10 points, and want revenge on Leafy. Eraser finds one and loses points. He ends up being the last person to find a ball, taking so long that it turns to night. He eventually finds a ball, but it's so dark the Announcer can't tell if it's red or maroon. Eraser then accidentally sets it on fire with Firey. The Announcer eventually believes it is a red ball, awarding Eraser 1 point.

In "Hurtful!", Leafy and Bubble attempt to find a ball in the Episode 13 section of the challenge. However, Leafy finds a maroon ball and cannot continue, while Bubble goes ahead.

First appearance of a Maroon ball, in a bush. 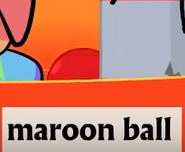 The last appearance of Maroon Ball in an official batch of recommended characters in BFB 15.
Items
Community content is available under CC-BY-SA unless otherwise noted.
Advertisement