Friends (alliance)
The following page focuses on the relationship between Match and Ruby.

Match and Ruby became friends starting in "Get Digging". While Pencil is frequently shown being annoyed by Ruby, Match has little to no problems with her. Ruby's relationship with Match also appears to be stronger than it is with Pencil, although Match is not as close to Ruby as Flower and Bubble.

In "Get Digging", Ruby joins the alliance after Match, along with Pencil invited her.

In "Insectophobe's Nightmare 3", Ruby tells Pencil and Match that she didn't want Bubble back cause she thought she'd be expelled from the alliance. Match reassures her that wouldn't happen and that they could have an alliance with all four of them.

In "Zeeky Boogy Doog", Ruby says that Match is a nice person for saving Firey's life. Later, Match gets upset when Ruby is shattered.

In "Get in the Van", they have a dance party together along with Bubble and Pencil. When Ruby comments on how good Donut's "blood" is, Match smiles.

In "It's a Monster", they play Spongy Cake during their break time. Later when Match says she's getting bored of driving through the desert, Ruby pulls out her mini-fridge filled with snowballs.

In "Welcome Back", Ruby seems to have replaced Match, as Match is in the TLC. This can be seen with how Pencil is fine with Ruby calling her Pence-Pence, even though that name was previously only to be used by Match. Pencil's newfound disdain for Match suggests that she values Ruby's incompetence over Match's selfishness.

In "Getting Teardrop to Talk", they are seen together throughout the episode. During the challenge, Match tells Ruby to close her eyes so that she'll be able to jump higher.

In "Lick Your Way to Freedom", Match compliments Ruby for only getting 152 votes.

In "Fortunate Ben", Match and Ruby are seen playing Spongy Cake together, which was the same game Match played with Pencil before the latter was eliminated.

In "Yeah, Who? I Wanna Know", when Donut forces Match on their team, Ruby holds onto one of her hands so she can't switch back.

In "Get Digging", Ruby tries to convince Match and Pencil into not reviving Bubble.

In "The Long-lost Yoyle City", Match calls out Ruby for causing the HPRC to be glued to the ground. 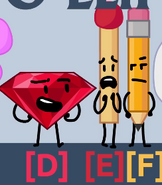