The Mega Mall is a location that first appeared in "Uprooting Everything". It's currently located in the World's Largest Oven.

The mall has a pink roof and a teal sign saying "MEGA MALL" in pink. It also has tan-colored bricks. Inside the mall, there is a game room featuring chess, along with a food court, clothing store and photo booth. These are all of the seen stores and attractions, although it is likely that there were more, given the mall's size.

In "Uprooting Everything", Flower and Teardrop climb the ladder to the baking tray in the World's Largest Oven and find it there. Leafy even goes here offscreen to collect some stuff to break the oven's glass. 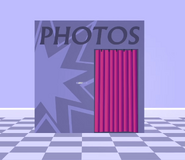