For the character, see Naily.
For X's baskets, see Baskets.

The Nail Baskets are flying baskets appearing in "Lofty". They are used in the challenge by the contestants to pop each others balloons. These baskets are a different object to X's baskets.

The Nail Baskets are brown baskets, suspended by a white balloon. It seems to stay afloat very well, and doesn't fall until interference with Snowball. They are filled with nails. The contestants use them to pop the balloons of opponents, as it is part of the challenge.

In "Lofty", the contestants are given the permission to use the nails by the Announcer. Many contestants use these nails, and even Snowball uses a nail against his own teammate. Coiny uses this basket as a source of protection from incoming nails, but ends up falling and causing Another Name to lose yet again. The remaining people staying afloat improvise by biting the balloons of enemies.

They reappeared in "Hurtful!" when the contestants had to go through every challenge. 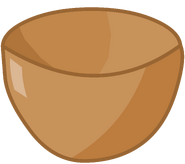