BFDIA: "Yeah, Who? I Wanna Know"
BFB: "The Escape from Four"

Naily is a female contestant in Battle for BFDI and The Power of Two and one of the former 30 recommended characters that could have joined BFDI and BFDIA.

Along with Tree, Barf Bag, and Saw, Naily only received 3 votes and she was flung to the Locker of Losers in "Reveal Novum".

In BFDIA, she only got 100 votes to join the season and was sent to the TLC.

Naily's IDFB redesign features a larger head and a lighter shade of gray, and her pointed end is smaller. Naily had a chance to rejoin in IDFB 2, but she only received 44 votes.[1]

Naily competed in BFB on Team Ice Cube!, but quit in "The Escape from Four" in favor of TPOT.

Naily appears to be a steel hardware nail. She often makes a cat-like face (parodying the :3 kaomoji) in her appearances.

Naily can often be silly and humorous, remaining mostly quiet other than to crack a few jokes, primarily nail puns.

On the other hand, she can be very argumentative and even dangerous, such as when she stabs Spongy (who is later revealed to be Tree in disguise). She defends this by saying that, when one is a nail, they often get the urge to stab things.

In either regards, Naily is seemingly defined by her physical being, whether she succumbs to her instincts or makes light of them varies, apparently, on the gravity of the situation and her own willpower.

On occasion, Naily can be quite boastful and confident. In "The Liar Ball You Don't Want", she assures her team of her abilities by saying "Don't worry, Icy Boys! I got this." In "Don't Dig Straight Down", she reassures Bomby about reaching the tunnel that they entered the Buried Forest, Deciduously Insulated from by saying "Bomby, that ain't a problem." She can also have a softer side as seen how in the same episode, she apologizes to Woody for stabbing him seven years ago and helps him by throwing him through a garbage chute.

As nails are won't to do, Naily likes to spear things. Naily has pricked Woody at least twice. Naily is very self-confident and is eager to participate.

Naily is fond of puns, which are a play on words. Firey Jr doesn't like that, but many recommended characters secretly appreciate it a whole lot.

Did You Know?: Every time Naily uses the pun "nailed it", she loses one friend.

In "Bowling, Now with Explosions!", Naily, Nailey, and Tack make their debuts as part of the crowd of Recommended Characters. All 3 of the Nailys have different names, but look the same.

In "The Reveal", Naily auditions to join Battle for Dream Island. In it, she stabs what sounds like Woody, and he shrieks from the pain.

In "Reveal Novum", Naily, along with Tree, Barf Bag, and Saw received 3 votes each, which was the 2nd lowest out of the rest, with the lowest being Roboty's 2 votes. As revenge on the Announcer, Naily continuously stabs him, and she was later flung to the Locker of Losers.

In "Yeah, Who? I Wanna Know", Naily had a chance to be a contestant in Battle for Dream Island Again, but she got 100 votes, which wasn't enough to join. She later was seen during Eraser's hallucination of the non-joining characters getting killed by a crusher, but since it was a hallucination, it wasn't real. She was later flung (again) to the Locker of Losers.

In "Welcome Back", Naily did not make a physical appearance, but she appeared on the voting card as a character able to be voted for to join. Because IDFB 2 never came out, her votes were void.

In "Getting Teardrop to Talk", Naily made her first speaking role. In it, Pencil's Alliance was letting to find out who threw the forks as an attempt to kill Bubble (Bell was the one who indirectly popped Bubble twice). She is later chosen to join Bracelety's team, alongside Donut. She is later used as a weight by Barf Bag and Bracelety, using Spongy as a trampoline, and is used to get a basket to X, making her team safe.

In "Today's Very Special Episode", Naily is seen after the intro, climbing Bell's string, along with the rest of Team Ice Cube! (barring Donut). At Cake at Stake, Naily is declared safe with 1,178 votes. When hit with a cake, she is knocked off of Bell's string, landing on Woody. Because of this, she avoids Lightning's electrocution of the climbers. She agrees with Clock that it was the largest zaptation she's ever seen. She does not actively participate in the challenge, but her team is safe.

In "Fortunate Ben", she doesn't speak, but despite that, she appears alongside teammates Spongy, Donut and Barf Bag, and corners Gelatin, who threw Bracelety's signs into a dumpster and were recycled into Death P.A.C.T.'s fortunes for the Cake at Stake. She is seen happy, however. She is later seen on her team's paper plane, and their plane never hit the ground, granting immunity.

In "The Liar Ball You Don't Want", Naily is first seen yelling "My turn!" and bouncing through two rows of bouncy toys along with everyone playing with the toys. When Donut announces what he did to Loser to eliminate him, she states that he had it coming. Firey Jr. tells her off for being "ungrateful". During the challenge, when the contestants are fighting over the jawbreaker, Naily stabs Bell in the face (who had the jawbreaker), killing her, and escorts the jawbreaker while still inside of Bell's body. She tells her team (referred to as "icy boys") not to worry, and that she's got it. Later on, it shows that Naily has been stabbed by Needle.

Naily is dead for the next few episodes but is revived in "Enter the Exit" by once Four is brought back by Pin. Prior to Four's resurrection, Donut had attempted to revive Naily, but had only succeeded in creating a mutilated version of her identical to the form contestants take on after being magically mutilated by Four. Upon being revived, Naily returns to her team and is hugged by Bomby.

In "What Do You Think of Roleplay?", Naily stabs Spongy, and this angers Firey Jr. He asks her if stabbing people is the only thing she knows how to do, and she replies that her being a nail makes everything look like something you should stab. Barf Bag later asks if Naily is a fake due to her not making any nail puns, but she explains that she's stopped because Firey Jr. found it annoying. She then asks if Spongy is a fake due to him just sitting there the whole time, but the other see this as normal. This makes her and Firey Jr. think that Bomby is the impostor, but before they can finalize their decision, iance figures out their impostor, meaning Team Ice Cube! is last and are up for elimination. She seems to be annoyed at the "melting" joke Four used when he says they were up for elimination and even more annoyed when X and Four argue about it. Naily and Firey Jr. blame each other for losing the challenge.

In "Return of the Rocket Ship", Naily states that she never expected the outcome when she was announced to be the last one safe during Cake at Stake with 5202 votes. She then proceeds to say "Good riddance, am I right?" after Firey Jr. was sucked into Four.

During the challenge, Naily is seen walking with the rest of Team Ice Cube! where they find a mysterious location.

Naily has a major role in "Don't Dig Straight Down". After discovering the Inverted Planet, she plays with Gelatin in the trees. She accidentally punctures Barf Bag, causing her to lose her barf and eventually become unconscious. She later plays in the Hot Spring with Gelatin and Spongy, until Spongy breaks the Earth's crust and causes lava to spew everywhere. She escapes with the rest of Team Ice Cube! into the tunnel. Bomby decides to detonate himself so the rest of Team Ice Cube! could escape. However, Naily was set off track when Gelatin pushes her and falls down Beep's hole. She grabs onto Nickel as Beep flies downward and is then trapped between the lava and Rocky's barf. Balloony later feeds Nickel to Rocky to vomit more, which leads them to the metal roofing of Golf Ball's Underground Factory.

Balloony decides to use Naily to "dig". Later on, the lava gets closer and Balloony is burnt to death. Naily tells everyone else on Beep that is still alive to try to break the ground. Golf Ball notices that there are intruders thanks to the siren in her lab, and attempts to investigate. She and Woody survive the lava, while Cloudy, Golf Ball and Rocky are engulfed by the lava and die. Naily suggests to Woody that they should run for the stairs. While running back, Naily apologizes to Woody for nailing him seven years ago in "The Reveal". Woody makes content, yet incomprehensible vocalizations, meaning that he accepted her apology.

When Naily and Woody climb up the stairs, they encounter Coiny and Cake, who are running away from the lava above. They notice a Garbage Chute, and they send Coiny to open it. Coiny succeeds, but then falls into the lava. Naily realizes that she and Cake can't fit, but Woody can if he is on his side. Cake and Naily bid Woody farewell as they send him into the garbage chute for safety. After throwing Woody, Naily and Cake are engulfed by the lava and suffer a fiery "death".

In "The Four is Lava", when the lava is drained, Naily and Coiny appear outside of Golf Ball's Underground Factory. Naily remarks that the lava must not have been hot enough to kill her and Coiny. Naily and Coiny later rush to X in the sky to find more survivors. Flower and Coiny argue about the challenge being a race, with Flower emphasizing that it's part of the challenge. After Coiny hears this, he punts Naily, making her fall behind, but later catches up. After The Losers! are declared safe, Flower grabs Naily and sticks her into the ground, much to her dismay. Flower finishes the challenge and Team Ice Cube! is put up for elimination.

In "The Escape from Four" Naily is upset and thinks she will be eliminated since she let her team down. Four slaps her in frustration and then says she is safe with 2,938 votes. Naily later quits Battle for BFDI to compete in The Power of Two.

In "X Marks the Spot", Naily can be seen cheering after Coiny "glued" X down with Lollipop's orange paint. She was also seen gasping with some of the other TPOT contestants when X is lassoed away by Four-Colored Team. 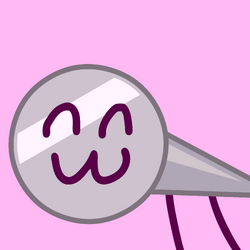