Close friends
This page lists all of the interactions between Needle and Pin. The two had little to no interactions in BFDI but became very close friends in BFDIA when they are on the same team and have stayed friends ever since.

In "Return of the Hang Glider", Pin turns to Needle, asking if she'd vote Leafy to win.

In "Insectophobe's Nightmare 3", Pin and Needle work together to kill the bugs.

In "Zeeky Boogy Doog", they both get angry at Coiny when he refers to them as pins and needles. They work together to make a farm-themed Dream Island.

In "Get in the Van", Needle holds Coiny for a limbless Pin when Pin wants to correct Coiny.

In "The Long-lost Yoyle City", they both talk about putting Coiny and Nickel next to each other and discover a portal of money. When the FreeSmart Supervan starts to attract Needle with a magnet, Pin tells everyone to hold on to her.

In "Getting Teardrop to Talk", they both search for Pin's blueberry seeds. Needle is sad to see Pin mutilated by Four. Needle was one of the Losers who didn't overreact or get angry at Pin for saying that they should focus on the challenge instead of Loser.

In "Questions Answered", Pin gives her team a speech about Loser's encouragement.

In "Enter the Exit", Needle says someone more dexterous should be the one to bring Four back, referring to Pin.

In "Get to the Top in 500 Steps", they sit together at night with Teardrop. When Needle becomes CGI, Pin and Teardrop are concerned for her, Pin pats Needle to see how she feels now.

In "You Know Those Buttons Don't Do Anything, Right?", Needle and Pin can be seen standing together for many moments.

In "Take the Plunge: Part 1", when Leafy and Pin decide to help each other, Needle has a surprised/concerned look on her face for some reason.

In "What Do You Think of Roleplay?", Needle figures out that Pin is the impostor because she was present when Needle became CGI.

In "Return of the Hang Glider", "Insectophobe's Nightmare 3", and "The Long-lost Yoyle City", Needle slaps Pin for calling her "Needy" at least once. In the former episode, Needle gets slapped right back by Pin for voting Firey instead of Leafy.

In "Yeah, Who? I Wanna Know", Needle chants for Pin to switch to the other team.

In "Get Digging", Needle laughs at the W.O.A.H. Bunch as they walk to the Cake at Stake area. Needle backs away when Pin asks if anyone wants to switch to their team.

In "The Long-lost Yoyle City", Needle tries to explain to Coiny how they got the large bag of money but Pin tells her to be quiet, which Needle is angry about. 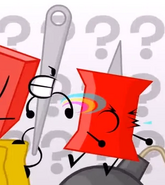 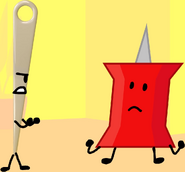 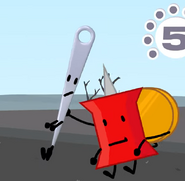 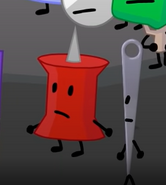 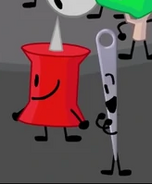 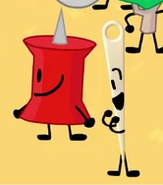