Battle for Dream Island Wiki
Register
Don't have an account?
Sign In
Advertisement
in: Characters with unknown genders, Recommended Characters, Characters,
and 4 more

Piggy_wig
Onigiri is one of the former eligible debuters for TPOT.

Onigiri is happy, calm and childlike, seen by them just randomly holding Camera's lens cap in their mouth, just like how Ice Cube did in "Welcome Back". They feel no pain from hard objects, as they get hit in the face with a cannon ball and feel no pain.

Onigiri is a triangular Japanese rice ball, made of white rice wrapped in a rectangular nori at the bottom. Their body is detailed in texture to signify the rice.

In "Lick Your Way to Freedom", Onigiri appears as Donut flies over the recommended characters.

In "The Escape from Four", Onigiri was selected as one of the 26 recommended characters that could join Two's new season, The Power of Two. Onigiri's audition is them getting hit in the face with a cannonball, similar to Eggy's audition in BFDI 17. They later are seen with it removed in Snare Drum's audition, when the cannonball falls off their face and onto Snare Drum.

They are announced to have failed at joining along with Blender and Camera, and is for some reason holding a lens cap in their mouth. Blender pulls it out to place on Camera before they're all sent falling through the floor. 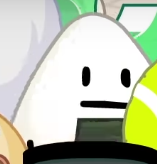 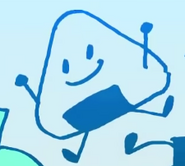 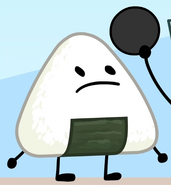 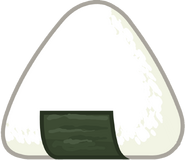 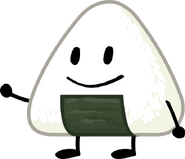 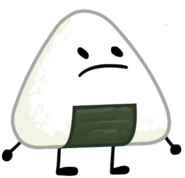 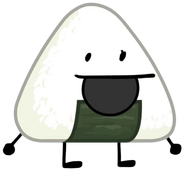 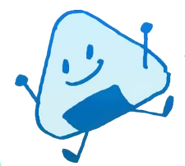