PDA, short for Personal Digital Assistant, is a recommended character, first appearing in "Today's Very Special Episode". They only appear in Battle for BFDI as a Patreon-recommended character. Following "Four Goes Too Far", they replace Swappy's place under the "Recommend a Character" reward on the Jacknjellify Patreon page. In "You Know Those Buttons Don't Do Anything, Right?", PDA becomes eligible to debut in The Power of Two.

PDA is shown to get irritated quite easily with no fear to speak their own mind. They are a bit bold, along with being vigilant and curious by their attempt to unlock the door in the room they are in.

PDA is based on a personal digital assistant, most likely the Apple Newton. They have a de-saturated green screen with a dark gray, rounded rectangular exterior, containing an elliptical button. They hold a light gray stylus with dark gray ends.

In "Four Goes Too Far", they appear on the hill with the other recommended characters as A Better Name Than That sleds down.

In "The Liar Ball You Don't Want", they gasp when Loser is eliminated.

In "This Episode Is About Basketball", they're hit in the face by a ball thrown by Coiny.

In "The Escape from Four", PDA was one of the 26 recommended characters selected by Two as one of the eligible candidates to become a contestant in The Power of Two. PDA's audition features them pulling out their stylus out of their side and leaning on it, making a proud expression.

PDA is later told that they didn't get enough votes to join, along with Income Tax Return Document, Salt Lamp, and VHSy. Income Tax Return Document tells Two they'll pay for this, to which PDA agrees saying that they won't help them figure out how much. PDA can later be seen trying to unlock one of the hotel doors with their stylus as Shopping Cart watches in anticipation. 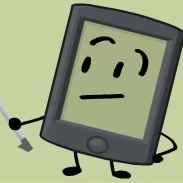 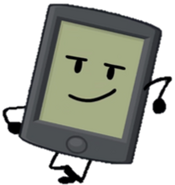 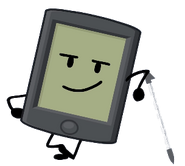 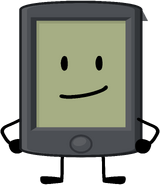 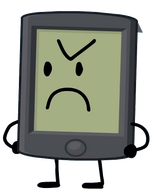 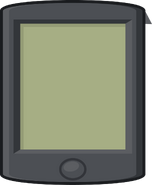