Friends (mostly), annoyance on Pencil's side (sometimes)
This article lists the interactions between Pencil and Ruby.

Pencil and Ruby became friends starting in "Get Digging". They're mostly considered friends, but sometimes, Pencil blames Ruby for making mistakes and has been shown to find Ruby annoying on several occasions. As an alliance, they still managed to mostly work together and Ruby seems to value Pencil in a submissive way as a strong leader, seemingly being blind to Pencil's manipulative side.

In "Get Digging", Match and Pencil ask Ruby if she wants to join their alliance, Ruby agrees only after hearing why Bubble and Ice Cube aren't in it anymore. When Ruby says that she will join, Pencil says "Yeah!"

In "Insectophobe's Nightmare 3", Ruby confesses that she was acting weird before because she was afraid that if Bubble came back she'd be expelled from the alliance. Pencil disregards the book that Bubble shows them in order to convince her to let Ruby join.

In "Zeeky Boogy Doog", Ruby was happy for Pencil for saving Gelatin. Pencil seemed to be upset seeing Ruby shattered into pieces.

In "Get in the Van", they have a dance party along with Match and Bubble. When Ruby doesn't promise to not switch she and Pencil high-five each other. Pencil and Ruby both leave Team No-Name to form a new team, and Ruby seems happy when they settle the on the name FreeSmart.

In "No More Snow!", every time Pencil yelled at Ruby, she would apologize afterwards.

In "It's a Monster" Ruby asks Pencil if she is sad about the recent loss of the FreeSmart Van, to which Pencil unveils the FreeSmart Supervan. After Book renders the Leg-Powered Recovery Center to being useless, Pencil asks if they should keep going or steal the HPRC. Ruby says steal and Pencil admits she was thinking the same thing.

In "The Long-lost Yoyle City", when Ruby isn't able to pull the HPRC out of the ground, Pencil jokingly says she's to weak and tries to do it herself, only to realize that it's stuck in glue. When Pencil gets caught in the tongue of the Fish Monster, Ruby is the only one who tries to pull her free. When the team finishes sawing Pencil in two, Ruby recovers her.

In "Welcome Back", Pencil and Ruby were going to eat the gumdrops they've collected with the rest of FreeSmart. Ruby attempted to save Pencil by jumping through the flights of stairs, only to shatter upon landing.

In "Getting Teardrop to Talk", Ruby was mostly seen around Pencil, Bubble, and Match. Ruby is happy when Pencil tells her that she's still a member. When Pencil says that their team name should be the alliance, Ruby tells her that that's such a good observation.

In "Enter the Exit", Pencil doodled most of her alliance members on her desk, with Ruby being one of them.

In "X Marks the Spot", Ruby reveals that before she was eliminated, Pencil left with her the FreeSmart Supervan, which shows that despite how Pencil considers Ruby an annoyance, she still seemed to trust her with her most prized possession. Ruby also referred to Pencil's elimination as "unforgivable". However, it is debatable how could Pencil give Ruby the Supervan shortly before her elimination, as this does not seem very plausible.

In "Get Digging", Ruby argued to Pencil that dipping wands and blowing a bubble is so much work; Pencil disagreed. Ruby mentioned to Pencil that Bubble can't "count to 3" and wouldn't be worth bringing back. Pencil told her it's a worth a try, but Ruby says she has better things to do. Pencil tells Ruby that she's being weird and Ruby nervously states she's only trying to be a good friend.

In "Welcome Back", Ruby gives a shocked expression when Pencil says that all of their years of documenting have been reduced to shavings.

In "Zeeky Boogy Doog", because Ruby recovered Flower, Pencil was about to decide to expel her from the alliance, although she also mentioned that she was "just kidding", much to Ruby's relief.

In "Get in the Van", Pencil tells Ruby and Book not to throw snow in the van because it's bad if it mixes with the gasoline. Ruby shrugs it off telling her that it can't be that bad.

In "No More Snow!", every time Ruby makes a mistake pressing the wrong button, along with questioning if she should even press any buttons, Pencil yells at her to the point of tears.

In "The Long-lost Yoyle City", Pencil tells Ruby to stop making mistakes after she places the HPRC into some glue.

In "Welcome Back", Pencil gets upset with Ruby for not removing the lens cap from the camera, Ruby apologizes. When Pencil asked her where did she get the BFDIA 6 results, Ruby hid them and played tricks on Pencil to get it from the edge of the tower, calling her "Pence-Pence"; until Pencil unintentionally went on the other side of the tower. Bubble tried to pull her up but she popped, as a result Pencil fell. After being saved by Book, Pencil says it was Ruby's fault that she fell. After realizing Ruby getting shattered, Pencil was shocked but then just ignored the accident.

In "Getting Teardrop to Talk", Pencil sighs and begrudgingly tells Ruby that she's still a member. This implies that Pencil most likely finds Ruby annoying. 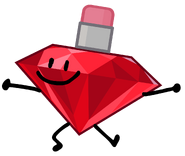