View source
watch 02:30
Who is Pillow?
Do you like this video?
Play Sound

Pillow is a female contestant in Battle for BFDI and The Power of Two.

She was a recommended character who was up for voting to debut in "The Reveal". In the joining audition, she is taking a deep breath, in and out. However she did not receive enough votes to join in "Reveal Novum", as she only received 6 votes.

In Battle for Dream Island Again, Pillow once again did not make it. With only 79 votes, she was flung to the TLC with the other non-joining characters.

Pillow's IDFB redesign has her sides slanted, her sheet is lavender, and her inside is an orchid color.

Pillow, along with the other TLC prisoners, had a chance to join IDFB, but she didn't join with 63 votes.[2]

In BFB, Pillow got to compete and was on Death P.A.C.T..

After the split, Pillow choose to participate in TPOT, she is on Just Not.

Pillow appears to be a bed pillow. Her sheet is white, and her inside is orchid in coloration.

Pillow seems to have a very patronizing and dignified personality. This is shown in BFB 1, where she misinterpreted and perpetuated that Teardrop's (and others') gesture indicates not caring. She also can sometimes be condescending, which is shown when she calls Barf Bag's suggestion "ludicrous". The condescending aspect of her character is seen again in, "You Know Those Buttons Don't Do Anything, Right?" when she is shown mocking Book as she tries to reassure their team mates.

Similarly to Golf Ball, Pillow also appears to be interested in research, but, unlike her, she doesn't seem to be bossy. She also seems to enjoy taking notes, as she can be seen writing in a sketchbook when Donut infected himself with the Twinkle of Contagion, although Pillow's Official Character Guide biography mentions that she doesn't know how to write, hinting that she might draw pictures instead. It's also hinted that Pillow is illiterate, as she picks up Book to look at the pictures instead of reading her.

Pillow seems to have an eccentric side to her, as she only joined her team because she heard the word "killing", licking Lollipop out of hunger, and randomly picking up Book to look at the pictures.

She also has a kinder side, as she recognized that Four would need to be protected from forks, and volunteered to block all the forks herself so her team could tell Black Hole to suck them up. This shows that she seems to be quite self-sacrificial, as she may often risk her own life to save her teammates.

Pillow is a big, fluffy down pillow, who is unpredictable. She can stuff objects in her pillowcase or use it as a weapon. However, she's not all that powerful... she can't even tell which things she's allowed to eat.

Pillow likes to think of herself as a scientist, although her research is often faulty. For instance, she once believed that people who waved their arms didn't care about things. She was wrong. Not a good look for a scientist, don't you agree?

Did You Know?: Pillow doesn't know how to write.

In "Half a Loaf Is Better Than None", Pillow, along with some contestants and the other recommended characters in that episode, had an opportunity to earn 15 bonus points if they retrieved Announcer's marble collection along with Bally and Marble. Pillow (and many other recommended characters) had seemingly dissipated when she jumped into the 10-foot deep vat of hydrochloric acid.

In "Vomitaco", 2 armless clones of her are present watching the Cake at Stake for that episode.

In "The Reveal", a limbless Pillow was a spectator at the Cake at Stake for that episode. She is also one of the 30 recommended characters to join. Her audition shows her calmly breathing.

In "Reveal Novum", Pillow got 6 votes, along with Balloony and Eggy, and was sent to the Locker of Losers.

In "Return of the Hang Glider", Pillow watches the final Cake at Stake.

In "Yeah, Who? I Wanna Know", she obtains only 79 votes to join, not enough. She is treated with TLC along with the others who failed to join.

In "Welcome Back", Pillow makes several cameo appearances in the TLC. Pillow was up for rejoining, along with all of the other TLC prisoners in the LOL.

Pillow tells Coiny to show some respect when he arm flutters after Four kills Pin, even though he was trying to get her back. When Four is about to screech again, Pillow smothers him with her body, only to end up dead herself. Four then recovers her, along with Pin and Balloony. She walks into Liy's team after she hears the word "killing". Before the challenge, when Saw, Book, and Teardrop flutter their arms, Pillow says that the teams are all set. At some point after her team wins the challenge first, she asks why Firey doesn't care when he arm flutters at Loser.

In "Lick Your Way to Freedom", Pillow only appears in the stinger ending with some of the other contestants.

In "Why Would You Do This on a Swingset", Pillow looks angrily at someone offscreen, presumably Gelatin since he’s killed her teammates with Forks. She’s sprayed with fork repellent by Liy and has an angry smile when Gelatin’s forks are repelled away. During Beep’s Cake at Stake, Pillow mentions that the votes are nearly double the total amount they got last time.

In "Today's Very Special Episode", she is first seen gliding across the screen after Cake at Stake, saying "She didn't care".

She has more of a role than in previous episodes, defending Four from the barrage of Forks. Later, after Team Ice Cube! is deemed safe, Pillow announces that she will stay to buy time while Pen, Bottle, Tree, and Remote run to Black Hole and tell him to suck up the forks. Despite her team's valiant efforts to prevent Four from getting stabbed by even one fork, Pillow's team is up for elimination, due to Pen's sub-par Four drawing.

In "Fortunate Ben", Pillow and the rest of her team are told to assemble, for it was Cake at Stake. Otherwise, they would "tremble". After Four and X mock Pen for his drawing, Pillow says to pick up the pace and asks how many votes they got. She receives 1,300 votes, the second-least. She reads her fortune out loud: "Go Icy, you're my idol!" She comments that her fortune is odd, but Four tells Pillow she is odd, offending her.

Shortly after Foldy and Stapy smile after Liy's elimination, Pillow announces that Liy can do more than just being a light switch.

In "Four Goes Too Far", Pillow can be seem writing notes as Donut injects himself with the Twinkle of Contagion.

In "The Liar Ball You Don't Want", she puts a popper inside her, making her face puff out. She is later seen with Pen and Remote, the latter with the Liar Ball. After Robot Flower loses connection to Remote, Pillow is seen with the ball. Thanks to Remote, her team successfully gets the ball into A Better Name Than That's undefended goal, with Pillow saying "Take that, Better Namers!"

In "This Episode Is About Basketball", she is angry at Tree, along with Pen, for not doing his part in the challenge. She also scolded Pen for throwing the balls at Black Hole. However, after they realized that Tree can't do anything for her team, she, along with Pen and Pie, threw balls into the basket.

In "Enter the Exit", she is seen having a cup of tea with Stapy. Later, while everyone looks for a way to bring back Four, she licks Lollipop. When Lollipop asks her how that would bring back Four, Pillow just says "What? Bring Four back? I was just hungry."

Pillow is absent in "Get to the Top in 500 Steps", despite the rest of Death P.A.C.T. appearing.

In "What Do You Think of Roleplay?", after Bottle is smashed by "Tree", she takes the fortune cookie inside of her for herself.

In "Return of the Rocket Ship", Pillow directly insults Four by calling the contest "predictable" and Four responds by rising from the background (also being very large), opening his mouth to lift Pillow with his tongue, screeching at Pillow very loudly, and then "swallowing" Pillow. Four then calls Pillow "incorrect", sarcastically finishing his challenge explanation.

Pillow's disappearance is later brought up by Black Hole. When Black Hole tells Four to recover Pillow, Four states that Pillow is still alive. This prompts Tree to go investigate Four's mouth, which Pen promptly does so by telling Four with "Five is greater than Four".

In "The Four is Lava", it is shown that the other members of Death P.A.C.T. have already found Pillow and are now just taking their time inside of Four in The Fourest. Pillow spots a trail of signs with Ice Cube's name and follows them to the EXIT. Just as she is about to open the door, Four grabs her with his finger and throws the team out of his mouth. Which also made them safe from elimination.

Pillow also made an earlier appearance in Teardrop’s happy thought, where she tells Teardrop to stop smashing windows only to get smashed herself.

In "The Escape from Four", Pillow walks to Four to inspect them struggling to suck up Spongy. She also helps with attempting to free the eliminated contestants by pulling on Spongy’s leg. Pillow later quits BFB and switches to TPOT. When Tree is convinced "as bark" into joining Two's show, Pillow tells Tree that bark isn't impressive, in which Tree tries to get her to be quiet.

In "You Know Those Buttons Don't Do Anything, Right?", while the contestants are making teams, Pillow abandons Death P.A.C.T. after Pen leaves and Fanny joins. She later grabs Book and starts flipping through her pages. She eventually puts her down and Book tells her that she'd appreciate if she didn't just read her. Pillow responds that she was just looking at the pictures. Book then decides that they should get on a team and Pillow points out Naily's team, which has enough spots for both of them. During the challenge, Pillow's team takes the elevator but it gets stuck when Snowball pries the doors open. They eventually make it to the top of the building thanks to Snowball and Basketball. Throughout the elevator chaos, Pillow is the only one who shows no reaction to the elevator stopping and is the only who is having fun when the elevator lands on Basketball. At the ending, Pillow smacks Two with a tray. 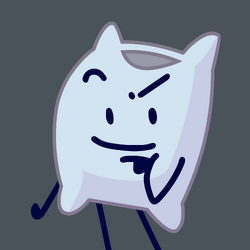