Plushes are a line of merchandise that depict Battle for Dream Island characters in the form of a stuffed toy. They are purchasable through the official Jacknjellify Shop, and formerly through Crowdmade, though the latter no longer produces BFDI plushes.

In the summer of 2017, Michael Huang announced on Twitter that he contacted a plush toy manufacturer to make licensed plushes of BFDI characters. Michael later had an Amazon.com account set up, which was supposedly related to the situation.

In 2018, Michael Huang stated that he had "pallets of plushes ready to be shipped", but he couldn't get them to ship to their apartment.

On May 9, 2019, a container containing 375 cartons of Firey plushes was delivered to Jacknjellify LLC by Yangzhou Sheba Toys.

On August 14, 2019, the plush was set on sale, announced with "(OUTDATED. See description!) The Official Firey Plush — Foldy now sent through e-mail!". It came with a Foldy papercraft template and a unique code that unlocked 100 times the voting power for the next plush. This video was marked as unlisted, due to the Foldy's and codes that come with the plush being discontinued. The video has since become public again.

On October 26, 2019, the plush was taken off sale, announced a community post on YouTube in favor of producing BFB 15.

The Firey plush sold out on July 28, 2020. Michael said that more Firey plushes have arrived and shipped out in November 2020.

The Firey plush is sold out as of February 27, 2021, and is no longer able to be purchased. However, it can still be viewed on the official store.

The new (2021) version of Firey differs from the original. It comes with stuffed limbs instead of shoestring limbs. The shade of orange used is also less bright. It is made by a currently unknown manufacturer.

On February 28, 2020, when the monthly wallpaper was shown off, Michael Huang had said that a new plush was in development.[1]

On July 3, 2020, the credits of "Let's Raid The Warehouse" showed a Leafy plush, which was set to be available to order and ship in late July 2020.

A Humany video on July 15, 2020 explained that the Leafy plush isn't proportional to the Firey plush, due to them wanting the plushes to be more huggable.[2]

On August 21, 2020, in the credits of "Fashion For Your Face!", Michael said they've informed their manufacturer the Leafy plushes have arrived and shipped out on August 20, 2020. He gave an update on restocking, saying the Leafy plushes will be available again in approximately 3 months.

On August 25, 2020, Cary Huang showed the first prototype Leafy plush in the Humany vlog "Good's 9th birthday!". In the first prototype plush, her facial features were larger, she was thinner, and her green body was darker. It was changed to resemble her BFDI appearance better.[3]

On September 6, 2020, Cary showed that a second prototype Leafy plush was sent form the manufacturer in the Humany vlog "Putting Leafy in the Microwave". It was close to the original, but with a more pale shade of green than the final version. The second prototype was the plush showed off in BFB episodes.[4]

The Leafy plush went back up for pre-orders on Black Friday 2020.

The Leafy plush is sold out as of February 27, 2021, and is no longer able to be purchased. However, it can still be viewed on the official store.

The Leafy plush went back in stock on July 31, 2021, with the price changed from $15.99 to $17.99 and had a change of manufacturer from Crowdmade to a currently unknown manufacturer.[5] The new Leafy plush is a more vivid shade of green, and has the same limbs as the Pen and 2021 Firey plushes. The new Leafy plush comes with a different tag, more similar to the one that came with Firey.

The texture is also different from the other plushes, and it reacts differently when you pet it.

On November 24th, 2020, before "We asked TikTok to VOTE the best object - BFDI Mini" was unveiled, Michael teased that a new plush was to be revealed alongside the video and holiday merch in a reply regarding another teaser for the sweaters, socks, and mugs.

On November 28th, 2020, a Firey Jr. plush was made available for purchase, alongside with the holiday merch.

The Firey Jr. plush is no longer available for purchase as of February 27, 2021. It's the only plush that can't be viewed on the official store.

According to an email exchange, the Firey Jr. plush will be getting restocked in a few months.[6]

The Firey Jr. plush will be available for purchase again in the meetup.[7]

On October 23, 2020, Cary Huang uploaded a video to Humany with a plush of Pen in the background before its official reveal. The video was quickly privated as a result.

On October 27, 2020, the Pen plush was officially revealed in a Humany video titled "NEW BFDI PLUSH UNVEILED by cary!", showing he has a Pen plush prototype. No release date was announced in the video because the staff was still working with the factory to make enough of them.

The Pen plush was going to be released in November 23rd, 2020, but the release date was delayed to around the end of November 2020, which was further pushed to December 1st, 2020. It didn't come out on that date, being delayed to an unknown date in 2020. It was finally released on December 11, 2020.

On November 7th, 2020, Michael Huang posted a photoshoot of the Pen plush, presumably for site images when it goes up for sale. In a reply to the tweet, a "secret plush" was mentioned.[8] Although this was suspected to be the Woody plush, this was most likely the Firey Jr. plush.

On November 11th, 2020, Michael Huang said that a Woody plush was in the works.

On November 13th, 2020, Cary Huang uploaded another video to Humany called "The Cats are Hissing at each other", which briefly shows the Woody plush. The video was then quickly made private as a result.

On January 15th 2021, in the credits of "B.F.B. = Back From Beginning", Michael showed a new plush. It was however censored and only referred to as "UNDISCLOSED PLUSH" and using he/him pronouns. The green thing sticking out turned out to be the plush's tag. On February 2, 2021, jacknjellify made a tweet about the upcoming plush, saying that it will be revealed at a video they're making, which will be posted on the weekend (February 6 or 7).

The Woody plush was originally intended to be released on Monday, February the 8th, but the plush was released early on the 7th.

The Woody plush is sold out as of June 18, 2021, and is no longer able to be purchased. However, it can still be viewed on the official store.

The Woody plush went back in stock on July 31, 2021, with the price changed from $15.00 to $17.99. It is made by an unknown manufacturer, likely to be the same as the company that made the new Firey and Leafy. This new version of Woody has a different texture than the one made by Beverly Hills Teddy Bear Co. and comes with a different tag, more in line with the other plushes.

On September 9th, 2021, jacknjellify had confirmed in "You can help BFDI win an Award!" that something big would come out in the next 1-2 months, which was the Loser plush.

On November 10, 2021, one of them was revealed to be Loser on the Official BFDI Plush Store.

On November 23, 2021, jacknjellify uploaded "The Loser Plush is here!", showing off the Loser plush.

On November 23, 2021, JacknJellify uploaded The Loser Plush is here!. The end screen of this video shows that the 2 new plushes are coming "next week" as of the release date of video, although they didn't confirm who the plushes would be, nor was the exact release date revealed.

Cary confirmed the plushes are Four and X in a livestream hosted on Humany.[11]

The plushes were delayed to a couple more weeks as of December 3, 2021, due to waiting for them to be truck-delivered.

The plushes were made available for purchase on December 11, 2021, with the release of The Official Four and X Plush.

On February 1, 2022, Cary was in the chat of a livestream, and a question was asked when was the next plush being worked on. Cary replied: "We are working on a new BFDI plush, but I can't reveal who it is just yet!!!! The characters' name is in my brain, but my lips won't let their name slip out! AAA.", referring to Cary not wanting to tell who the next plush will be.

On February 26, 2022, Cary made a livestream on his channel Humany, and a question was asked who is gonna be the next plush. Cary said that the prototype of the plush is in his house but he can't say who it is.

On March 18, 2022, Cary was doing a livestream for his and Michael's birthday in his channel carykh, and a question was asked about their thoughts of the next plush. Cary said that it's a secret but he also said that we will find out in the coming months.

On May 25, 2022, it was confirmed that the new plush would be Rocky, as announced in the video BFDI & Inanimate Insanity Meet Up!.

A Firey display plush when it was sold at the 2019 meetup.

A Firey plush in the cafe.

"The Official Firey Plush IS ON SALE!" video thumbnail.

Michael and his Firey plush (BFB 15)

Michael and his Firey plush (BFB 16)

Michael and his Firey plush (BFB 17)

Cary and his Firey plush

Firey on Cary's bed in the Play Button unboxing video

The Leafy plush, as shown on Crowdmade

The Leafy plush after being cooked in a microwave

The Leafy Plush that appeared in "Who's The Real Firey? (ft. Leafy Plush)"

Leafy Plush Shown Off In BFB 22

Firey and Leafy plush (Who's The Real Firey?)

Firey and Leafy plush (The Loser Plush is here)

Cary and his Firey and Leafy plush

Cary and his Leafy plush

The Leafy plush prototype, next to her final version.

All 4 prototypes of the Leafy plush

Leafy plush in the microwave

The first prototype of the Leafy plush in the microwave

Firey Jr. with his plush

Firey Jr. plush in his bag

Michael and his Firey Jr. and Leafy plush (BFB 27)

Cary and his Firey Jr. plush

An example of a finalized commercial Firey Jr. plush

Pen plush in his bag

Cary and his Pen plush

Michael and his Firey and Pen plush (BFB 27)

Pen plush in the microwave

A leaked image of the Woody plush

The Woody plush on Cary's chair

Woody plush in his bag

An example of a finalized Woody plush

Woody next to the updated Woody

Loser plush in his bag

Leafy and Loser plush (The Loser Plush is here)

Four plush in its bag

Four with all of the plushes together

X plush in its bag

X and the other plushes 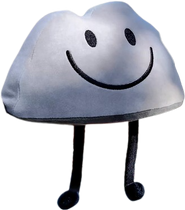 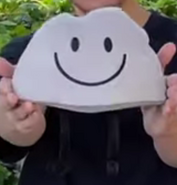 Several characters were recommended in plush form. They are listed below.