Battle for Dream Island Wiki
Register
Don't have an account?
Sign In
Advertisement
in: Characters, Contestants, Disqualified,
and 9 more

BFB 22:     This character has transparency in their design.

Profily, also known as Profile Picture is a recommended character and a contestant who competed in Battle for BFB, and allegedly competed in Battle for Dream Island and Battle for Dream Island Again. They resemble a default YouTube profile picture. In "The Hidden Contestant", they debuted in the game and were eliminated shortly after; their elimination was made into the episode's challenge. They claim that they have been part of BFDI since the very beginning, thought it is not confirmed if these claims are true. Although, they and Announcer seem to recognize each other in "B.F.B. = Back From Beginning", as they nicknamed him "Announcery Forfouncery" and the Announcer calls them by their main nickname and does not ask who they are.

Some alleged changes were also shown in "The Hidden Contestant":

Profily is mainly calm, kind, and easily excitable. They are also very skilled, as they were able to complete every contest Four gave them faster than any other contestant. They desire feeling included, due to allegedly being apart of the show since the beginning and being neglected since no one remembered them. They are also shown to be thoughtful and empathetic as they felt that Four became the desert due to feeling unwanted and ignored, which is how they felt for a long time.

Profily first appeared as Profile Picture in the credits roll of recommended characters in "Who Stole Donut's Diary?". In this appearance, they were poorly drawn, and had a design depicting Firey and Coiny on them.

In "The Hidden Contestant", they appear after Woody's elimination, after Four says that the game is down to its final five contestants. Profily then randomly appears, correcting Four; they ask if Four meant the final six to include them. Four says that he did not mean that, and Profily rebutes him, saying that there are obviously six contestants left, including them. Four is frustrated by this, and asks who they are. Profile Picture then introduces themselves as Profily, and proclaims they are the audience's favourite contestant. They then go up to Gelatin to ask if he recognizes them, who sheepishly feigns remembering Profily. Four then asks the remaining contestants if they actually remember Profily, with all of them, except for Teardrop, who cannot speak, saying that they do not remember them at all.

Profily is shocked by this, and wants everyone to remember the "funny adventures" they had together. A flashback sequence starts, with the first flashback starting with an event preceding the events of "Sweet Tooth", where Profily shows Announcer a "tie breaker", ripping a necktie in half in the event of a tiebreaker. Announcer liked the pun Profily made. Profily then asks Announcer not to steal it, out of fear that it would be something he would become known for; Announcer shrugs them off. This is followed by flashbacks to "Return of the Hang Glider", where Profily is present at the finale, but got zero votes to win. In "Get Digging", Profily supposedly interjects during Coiny's name suggestion for W.O.A.H. Bunch, by saying that they are a ray of sunshine and everybody loves them. Neither Pin, Donut, nor Coiny acknowledge Profily or their suggestion. In "Insectophobe's Nightmare 3", Profily shows off their flamethrower to Puffball Speaker Box. They then try to kill the fireproof bugs with it, but Puffball Speaker Box says that this will probably do nothing. In "The Escape from Four", they are off-screen at the Final 14 screen. The camera then pans to accommodate Profily. Finally, in "The Tweested Temple", they apparently find the last totem for the challenge. Lollipop figures out that they were the reason everyone waited 73 days for Flower to find a rock. Four is still not convinced, however. Profily responds that it is easy to forget them, but that they are even in the intro, and starts it by raising their arm.

Afterwards, Four decides that Profily is a legitimate contestant and allows them to compete. When Four tries to start the next contest, however, Profily interrupts by accidentally talking over him. Four tries to start the contest again but Profily sings, cutting him off. After talking with X, Four starts making up unreasonable challenges on the fly so that Profily can lose, from climbing the tallest mountain in the valley, digging the deepest hole, killing bugs, and looking the most like a leaf, all of which Profily succeeds in doing. Four decides that this is not a good strategy to get rid of Profily, has them place 6th overall, and snaps them to the BRB. However, the remaining contestants all grab hold of Profily, unanimously agreeing that their elimination is unfair. Leafy suggests that they throw Profily a party since they all went so long without noticing them. This makes Four furious since the contestants were willing to throw a party for someone they just met, over Four who once made it a challenge to throw him one and only two contestants actually did so. After Four finishes his tirade, he makes the challenge for the contestants to eliminate Profily by taking them to the BRB.

Leafy starts the contest by grabbing Profily, but Teardrop snatches them away. Leafy attempts to gain Profily again as Teardrop carries them to the BRB. In this scene, Leafy calls Profily 'Profily'. However, Profily states that only their friends call them Profily, and that Leafy should refer to them as "Profile Picture", much to Leafy's shock. Teardrop then walks up the BRB with Profily. Teardrop arrives to where Lollipop and Flower are. Lollipop asks Teardrop to hand over Profily but she refuses. Lollipop has no issue with this since Teardrop brought Profily up there herself and should get to continue. Profily angrily asks if they have a say in any of this. Flower then tackles Teardrop, causing them both and Profily to fall to the ground. Profily rejoices that they are free from Teardrop's clutches. After some convincing from Gelatin, X snaps Profily to the BRB. As they rise, Flower, Teardrop, and Lollipop grab hold of them. The Carrot Cakes remove everyone from Profily and then drop them, leaving just Leafy, who is by the aloe vera garden. She grabs hold of Profily and gets them in the garden.

In "Uprooting Everything", Profily is mentioned by Flower in the room inside the World's Largest Oven.

In "B.F.B. = Back From Beginning", Profily is released from the BRB and says hello to the Announcer, who greets them back. During the challenge, Loser and Profily are posted at the 26th challenge since it revolves entirely around eliminating them. Flower tells Profily they're eliminated, making them act over dramatically to their newest elimination. When Gelatin and Teardrop arrive, the latter throws Profily off into the distance to eliminate them.

In "SOS (Save Our Show)", Profily tells the Announcer to stop handing out medals. The Announcer then gives them a wooden medal for being rude. Profily happily accepts it and asks what's going on with the competition, and the Announcer reveals that BFB is canceled due to the show's low budget. Later, the budget gets so low that everyone becomes paper cutouts. Profily exclaims that they need to do something or else everyone will forget them, before quickly correcting themself by saying "I mean us".

In "Chapter Complete", Profily meets X, who's been sitting alone in the desert for a couple of months. X says that they're waiting in the exact spot that Four sunk into, so Profily offers to wait with them. During Cake at Stake, Profily has a hard time choosing between Flower or Gelatin to win, since they apparently have so much history with both, but they settle on Flower. Profily then assists in the drum roll for the winner. After Cake at Stake, Profily joins X again, asking how Four and the desert correlate. X clarifies that the entire desert is Four, and shows them the seasons of BFDI that Four has been hosting in their mind. Profily says that Four must be trying to escape due to how unwanted he's been. Profily figures that he'll come back if everyone showed that they care for him. Profily attempts to start by hugging a four cactus, but it causes them to become distorted and rise into the air until they pop. X recovers Profily, so they decide that they can instead hug the sand. X leaves to tell the contestants to execute Profily's idea with the contestants help, leaving Profily by themself. They start calling out to Four, which Four starts to hear from inside their mind. Profily is making sand castles when a large sandy Four emerges from the ground, saying that he'll go to the Pillary Ruins to be alone. X's group arrive back to Profily, who tells them that Four is going to the Pillary Ruins.

Later, the group that chased after Purple Face for A BFDI arrive to Profily, asking what happened. Profily mistakenly tells them what they did, and then explains that Four became conscious and is headed to the Pillary Ruins. They feel that they have to help, but Profily reassures everyone that the other group can handle getting Four back, and proposes that they can help with something else. This is later revealed to be a party meant for Four, which he loves.

In "The Worst Day of Black Hole's Life", after Two announces they are down to the final 41 contestants, Profily interrupts by saying final 42. When Two says that they don't think so and start counting, Profily assumes that they won't let Teardrop on the show. After Two realizes Teardrop wanted to join, Two gladly lets her in. Fanny ends up getting angry and says that TPOT will never end if they let more people on the show. After Fanny's argument, Two decides to take it back, but is interrupted once again by Profily, saying they already said Teardrop could be on the show, and was so happy. Two decides to take it back again and let Teardrop in the show. After the intro, Profily realizes they weren't shown, and decides to leave by hanging on a rope ladder. 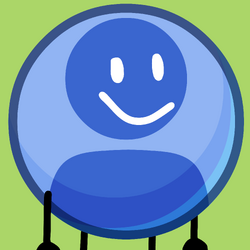