Start a Wiki
watch 02:09
Who is Puffball?
Do you like this video?

Puffball is a female contestant on Battle for Dream Island Again, Battle for BFDI, and The Power of Two.

She talks in a strange vocoded voice, and whenever she speaks, the color of her body rapidly changes from one color of the rainbow to another and sparkles. She can also float and change her size. Puffball was the last contestant to make it into the cast of BFDIA, with 291 votes because Leafy, Bubble, and Flower were not present at the time. She competed on Team No-Name and was eliminated in the unreleased BFDIA 6 with a record amount of 1,455 dislikes.

She competed in BFB on Free Food.

She is currently competing in TPOT.

Puffball is seemingly a puffball. Her outline is orchid, her shading is a lavender rose, and her main body is lavender blush. Her old design (seen in "Yeah, Who? I Wanna Know") has a darker outline.

While speaking, Puffball often changes colors, such as light green, light blue, light purple, and more. She can fly and change her size as well.

Puffball is quite strange, given her ability to change color and speak in a vocoded tone. She proclaims to be a nice person, and is usually cool-headed, except when wrong. In "The Long-lost Yoyle City", she is shown to be rather selfish, as she betrays her entire team just so she can win a prize during her next elimination. This is also seen when she cheats to win in "Questions Answered" after she helps Stapy give iance the Fake Buzzer. Puffball has shown to be arrogant too, as seen in "What Do You Think of Roleplay?" when she says that Grassy is "basic". Despite appearing arrogant at times, Puffball seems to care deeply about her teammates, which is exemplified in "The Four is Lava" when she saved Foldy and Bell from Spongy's cannonball attacks.

The Official Character Guide says she wants to lose her flight ability, and gain limbs like other characters have, even if for only a day.

No one knows what Puffball is. She's pink, fluffy, and round. Whatever she is, she can fly, regurgitate rainbow substances when in distress, and change colors when she talks. Other than that, it's anyone's guess.

Puffball is self-indulgent and will do anything just for fun. Once, she built a stack of forks with some friends just to knock them down. When asked to make sure Foldy and Bell had cakes, Puffball ate them when no one was looking. She usually goes along with whatever Fries tells her what to do.

Did You Know?: One of Puffball's dreams is for her to lose the ability to fly and gain limbs, even if just for a day.

Puffball has a voice that is vocoded in a voice editing software. Initially, the lines are recorded raw and are then vocoded later. Her non-vocoded voice sounds a lot like Cloudy's voice, but without his accent.

In "Yeah, Who? I Wanna Know", Puffball was originally not going to be in BFDIA; since Leafy, Woody, Nonexisty, Bubble and Flower were disqualified, she was allowed in, placing 20th. After Gelatin asks who the host was going to be, Puffball kept repeating "Yeah, who? I wanna know!" in a song for a while. When everyone was showing their favorite screens, Puffball's was Abraham Lincoln's head. During the challenge, Puffball's team easily won over the smaller team, consisting of Coiny, Donut and Pin.

In "Get Digging", the teams have to make yoyle stew, and Puffball's outline was changed to be slightly lighter. Golf Ball orders Puffball (along with Book, Ice Cube, Needle, Gelatin, and Spongy) to fly to Yoyleland and get the Yoyleberries. Firey said it would take months of walking, but Golf Ball said it would only take days of flying. When Firey said "nobody could fly", Puffball started to get bigger and appeared mad, but was burned after Firey turned around and screamed. They flew to Yoyleland, passing many things along the way. Needle and Gelatin picked the Yoyleberries. Then Leafy appears and says "I hope I'm not too needy,", which made Needle mad and results in her slapping her and saying "Don't call me Needy!" Leafy started throwing knives at Needle and Gelatin, but Gelatin had acid spitballs that would disintegrate anything that hits it. Leafy supposedly dodged them all, hence she wasn't disintegrated. This made Leafy mad and she started throwing many more knives. Puffball picked up Needle and Gelatin and started flying much faster than before, with the knives right behind them. The knives flew into the Yoyle stew. Puffball's team lost the challenge because their yoyle stew was too "complicated" and "sharp".

In "Insectophobe's Nightmare 3", because she got the most likes at 387, Puffball won the prize, a personal speaker box. She reacted poorly to Pencil calling her "Puffy", but refused to slap her on account of her being "nice". When Pencil points out Puffball couldn't slap Pencil because she lacks arms, Puffball quickly dismisses this. She got 59 dislikes.

In "Zeeky Boogy Doog", the contest was to rebuild Dream Island. She asked what to name the island, but later Bomby fell into the incinerator and exploded Golf Ball's factory, causing all of them to die and Team No-Name to lose.

In "Get in the Van", because she got the most likes at 424, Puffball won another prize, which was the removal of another contestant's limbs. She was reluctant to have another contestant's limbs removed but chose Pin (the one who stabbed her speaker box) after being told by Firey Speaker Box that she must. She got 168 dislikes. She later carried her team to Yoyle Mountain.

In "No More Snow!", at the start of the episode, Puffball and Fries were the only ones present, as their other team members got eaten by Evil Leafy. Book and Ruby ran from Evil Leafy and dropped a 9,042kg weight as Puffball was chasing to get them. It crushed Puffball, Fries and Evil Leafy (with the HPRC in it).

In "It's a Monster", Puffball was recovered by W.O.A.H. Bunch's members, trying to threaten her to fly into Yoyle Mountain with their team members. She recovered Gelatin and told him to freeze them, and he did so.

In "The Long-lost Yoyle City", when Team No-Name was about to make it to the summit of Yoyle Mountain, Puffball realized that FreeSmart got to the Yoyle Mountain first. Suddenly, Puffball let her Cake at Stake prize winnings get to her head, so she killed all of her teammates by shrinking and letting them fall into the sharp jaws of the fish because she thought if Team No-Name was up for elimination, she would get the prize as she did before.

In "Getting Teardrop to Talk", Puffball is first seen helping Gelatin building and finishing off his very large stack of forks. She later joins Free Food alongside Fries. In the challenge, she pushes X's basket towards him, spilling out the air but still winning immunity for her team.

In "Why Would You Do This on a Swingset", Puffball initially agrees to play Toss the Dirt with Marker but is quickly persuaded by Fries to spin the swing around the center, again allowing Free Food to win safety and avoid elimination.

In "Fortunate Ben", Puffball's flying abilities are disabled by Four with duct tape, alongside Cloudy due to flying being restricted in the paper airplane challenge. She remains disabled for the following episodes and has not been freed from the wrapping until Questions Answered.

In "Questions Answered", Stapy took off Puffball's bandages when he used them to make a fake iance buzzer box. Then Puffball pushes the fake iance buzzer box to iance and takes away the real one. The plan backfired, because Match caught Stapy and her cheating using Camera, and presented the evidence to Donut, who subsequently declared Free Food was UFE.

In "This Episode Is About Basketball", Puffball is in the bottom two, although X is reading the votes backward so the amount of votes she got is revealed second. When Stapy realizes he's eliminated, he asks her to make sure that Foldy and Bell (who were dead) get their cakes before leaving. Puffball falls back on this, however, as she eats their cakes. Nickel tells her to leave some for him, which is followed by her vomiting what was left of the cakes.

In "What Do You Think of Roleplay?", Puffball was one of the contestants randomly selected to have their minds swapped. In her case, her mind entered Basketball's body, and her body was given to Rocky. On Free Food's side, Yellow Face figured out Puffball was the fake when she puked on him. As Basketball, Puffball was noticeably floating and singing instead of talking. Despite this, she was only discovered after she criticized Grassy for being "basic", despite supposedly being friends with him.

In "Return of the Rocket Ship", Puffball holds the 10,000 vote banner alongside Lightning.

In "Don't Dig Straight Down", Puffball is first seen asking Four whether Free Food is safe when they give him a toy emerald and then celebrating with her team when he confirms that they are. Later, she is one of the only contestants to be explicitly confirmed to survive the lava flood. She heads to space and asks Four why, if the emeralds were either barely underground or in Four's eye, X is hurtling towards the planet's core.

In "The Four is Lava", Puffball hears Four announce the contest from space, racing alongside with Spongy in his jet. She reaches Earth and is provoked by Spongy's cannonballs, ordering him to stop. Spongy refuses and continues to shoot, but Puffball similarly avoids the cannonballs as Leafy in "Lofty" and "Get Digging". Puffball finds Bell and Foldy over the lava, both shocked by a lava splash by one of Spongy's cannonballs. Puffball proceeds to counter the attacks by using Bell to catch the cannonball and throw it back to Spongy, damaging his ship. Later, Blocky launches from a tree and grabs hold of Puffball, causing her to swing around aggressively in an attempt to shake him off. At one point, Foldy kicks Blocky off, only to be pushed off by him a few seconds later. Puffball finally flings Blocky off of her by flying at a high speed and stopping suddenly. She then catches Foldy from falling into the lava, then the team heads to Four and finishes the contest, placing them 3rd.

In "The Escape from Four", Puffball quits BFB when the prize changes from A BFDI to A BFB, and switches over to TPOT. 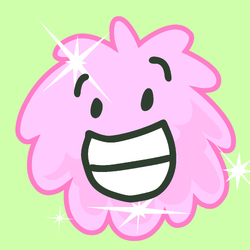