Battle for Dream Island Wiki
Register
Don't have an account?
Sign In
Advertisement
in: Hosts, Speaker Box, Characters,
and 8 more

The Puffball Speaker Box was Puffball's pink and fluffy speaker box which she won as a Cake at Stake prize in BFDIA 3.

Puffball Speaker Box has pink fur like Puffball, and also speaks like her (with vocoding, color changing, and sparkling). Puffball Speaker Box used to be the host of BFDIA, and the first talking host since Announcer and Firey and Flower's speaker boxes.

She was killed off when a knife stabbed her in "Get in the Van", which was unintentionally thrown by Pin who tried to kill Leafy.

In "Insectophobe's Nightmare 3", Puffball Speaker Box is Puffball's prize for getting the most likes. As a result, she's also a host on the show, along with TV, and does Cake at Stake. After the contest is randomly selected, she tells everyone to get into their team's glass boxes. The challenge is to kill all of the bugs in the boxes first. Team No-Name wins after using Bomby to blow up the bugs. The explosion causes Coiny's poisoned body to land next to the Speaker Box, who asks if he's a win token. She then tells the viewers to rate the W.O.A.H. Bunch videos.

In "Zeeky Boogy Doog", Puffball Speaker Box wants to start Cake at Stake, and wants the contestants on the Eiffel Tower to come down for it. She tells Nickel to get them down, but he can't as it's a long way up. Pin volunteers and proceeds to shake everyone off the tower. She then tells Teardrop to choose between immunity into the final 15 of an HPRC, Teardrop chooses the latter. Puffball Speaker Box later stops Bubble from following the contestants into Golf Ball's Underground Factory, as she isn't a contestant in this season. She then gives her a soda to cheer her up. After the contest ends, she tells W.O.A.H. Bunch that their farm-themed Dream Island is awful. However, Team No-Name has no Dream Island, so W.O.A.H. Bunch wins by default. She then tells the viewers to rate the members of Team No-Name.

In "Get in the Van", as she is about to announce Cake at Stake, she gets stabbed by a knife that Pin unintentionally threw (she was actually aiming for Leafy), destroying her and making her vomit a rainbow substance all over Coiny and Needle, as members of the puffball species are known to do so during times of distress. Eventually, Puffball finds out that Pin stabbed her Speaker Box when she heard the conversation that Firey and Gelatin were having. As a result, she angrily spits out rainbows at Pin. She even chooses Pin to lose her limbs as her second Cake at Stake prize for stabbing her Speaker Box.

In "The Hidden Contestant", she's shown in a flashback to "Insectophobe's Nightmare 3" where Profily is shown to be present during the bug killing contest.

In "SOS (Save Our Show)", Puffball Speaker Box is shown in the Announcer's flashback, as it turns out that he created her.

In "Insectophobe's Nightmare 3", she tells Pencil to stop touching her, as she liked how fuzzy she felt. She also says that Pencil is overreacting after she panics over her alliance all being in the final seven in Cake at Stake.

In "Insectophobe's Nightmare 3", she tells Dora to go "explore" the TLC.

In "Zeeky Boogy Doog", she immediately turns to Nickel to get the contestants down from the Eiffel Tower

In "The Hidden Contestant", Puffball Speaker Box seems to be on good terms with Profily, as she laughs at them using a flamethrower and calls them cool. She then tells them that it would probably do nothing against fire-proof bugs. 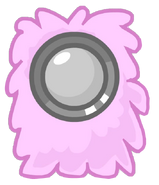 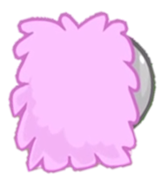 Puffball Speaker Box on one side

The Puffball Speaker Box vomits its Rainbow Substance onto Coiny and Needle.