Battle for Dream Island Wiki
Register
Don't have an account?
Sign In
Advertisement
in: Articles proposed for merging into two pages, Stubs, Articles with conjectural names,
and 3 more

Inside of body of any member of the Puffball species.

"What Do You Think of Roleplay?"

For the substance shown in BFB 6, see Twinkle of Contagion.

The Rainbow Substance is an odd rainbow liquid made of unknown chemicals (possibly remains of digested food) regurgitated by the Puffball species during times of distress. It was first seen in BFDIA 4 after Puffball stated how she hopes Dream Island will be found, which causes her to vomit the substance. It was also used twice in BFDIA 5a when Puffball speakerbox got stabbed by Pin's knife and vomited out the substance, and Puffball also vomited out the substance at Pin when she found out her speaker box had been killed. Its last appearance was in BFB 12, when Rocky, inside of Puffball's body, threw it up due to his chronic vomiting issue. The substance looks somewhat similar to the Twinkle of Contagion. 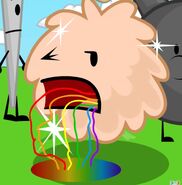 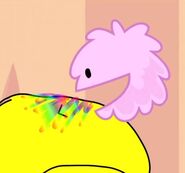