< Recommended Characters
View source
watch 02:56
Doctor Strange in The Multiverse o Madness - The Loop
Do you like this video?
Play Sound

Here are all the 53 recommended characters that appeared in BFB 4.

Everyone's expressions look disappointed or angry as most of them are mad at Pen for making the worst drawing of Four ever.

This was also the first episode starring recommended characters recommended from Patreon.

Winner; Get W. (Get Whipped)

After BFB 4, Bracelety is no longer in the Recommend a Character section. Swappy was in it from BFB 5-6. As of BFB 7, they were replaced with PDA. 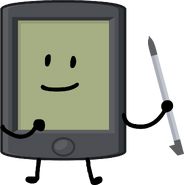 PDA was on the Patreon as the "Recommend a Character!" icon. Replaced by Naily.
Recommended characters
Community content is available under CC-BY-SA unless otherwise noted.
Advertisement