Battle for Dream Island Wiki
Register
Don't have an account?
Sign In
Advertisement
in: Items, Machine, Season 1 items,
and 4 more

Pie, as well as everyone else who has joined prior to BFB

The Recovery Centers are devices where contestants go to be revived after they are destroyed, maimed, temporarily killed, etc.

The only contestants to have their own recovery center are Bubble, Ice Cube, Firey, Pie and Leafy (only shown in Episode 24). Announcer also has a recovery center. Flower destroyed all of the recovery centers in episode 25 by melting them in an incinerator. However, since recovery centers can be created, none of the killed characters are permanently dead.

However, in "Getting Teardrop to Talk", Black Hole destroyed all the recovery centers, leaving the only way to regenerate a dead contestant is by Four somehow bringing them back to life, or either, in "Lick Your Way to Freedom", Four regenerates them but they get trapped into jawbreakers. X is also able to bring dead contestants back to life as of BFB 28.

The Bubble Recovery Center is the first of many on the show. It debuts in the first part of the first episode, "Take the Plunge: Part 1", after Bubble is popped by Ice Cube because she put Bubble too close to her face just to show that both of them are friends.

It appears again in "Take the Plunge: Part 2" when she's chosen for Pin's team, a commercial in "Barriers and Pitfalls", as well as in almost all following episodes. In "Insectophobe's Nightmare 2", Bubble received a new blue recovery center as a reward for making it to the final 3. In "Getting Teardrop to Talk", Bubble had a gray recovery center again but with a symbol near the bottom. 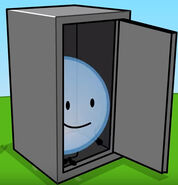 Bubble going outside of the recovery center

The Bubble Recovery Center shown in "Getting Teardrop to Talk"

The Ice Cube Recovery Center is the second recovery center to be introduced. It debuted in "Are You Smarter Than a Snowball?" as a result of Leafy shattering Ice Cube with a bowling ball in "Barriers and Pitfalls". In "The Reveal", the Ice Cube Recovery Center 2.0 was used and listed five questions that Leafy had to answer. However, this is shown to take more time to recover Ice Cube instead of just simply recovering her.

Leafy using the Ice Cube Recovery Center 2.0 in "The Reveal"

Ugh. You're here to bother me again, aren't you, Leafy? Whatev. Do you want to recover a recently destroyed ice cube? Psht. As if it matters.

When was the ice cube destroyed? It's not like you'll remember, you being so forgetful all the time.

I don't really care, but what were the dimensions of the ice cube? I didn't put any units just to make it hard for you, Leafy.

What liquid was the ice cube composed of?

What type of limbs did the ice cube have?

What was the ice cube's personality?

It creates Ice Cube recovery centers, but it's quite slow. In "Get Digging", an ICRCC can be briefly seen as Needle and Gelatin fly on Puffball, but on their way back it isn't there. It is possible that Flower didn't destroy all of the Recovery Centers. The ICRCC looks identical to the Master Recovery Center, except for the text on front.

A GIF of the ICRCC

The Firey Recovery Center debuted in "Power of Three" after Firey fell in the river that the temporary teams-of-three had to cross over. Pen realized that water is Firey's poison, but finds the Recovery Center appearing near the start of the bridge. However, in its debut appearance it requires some time to warm up, almost putting Pen, Eraser and Firey in danger for elimination. It appeared again in "The Reveal", in a commercial made by Blocky. In "Insectophobe's Nightmare 2", Firey was given a new orange recovery center as a gift for getting to the final 3. In "Return of the Hang Glider", when it is dropped in the incinerator, it is the only recovery that became blackened and burnt instead of melting.

In "Don't Dig Straight Down", Barf Bag implies the FRC is warm, much like Firey himself.

The Firey Recovery Center, as seen in episode 6

Announcer's, Leafy's, Firey's, and Bubble's Recovery centers in a row

Unfortunately, in "Return of the Hang Glider", all the recovery centers as of that time were all destroyed by Flower.

The Cheese Orb Recovery Center (CORC) was a recovery center that was shown in "Insectophobe's Nightmare 2" as one of the recommended characters. When Flower is destroying the recovery centers in "Return of the Hang Glider", a Cheese Orb Recovery Center is shown, making a brief cameo. However, Flower destroys it immediately after. Cheese Orb appears in "Hurtful!", only to be sliced in quarters by the Announcer to make the cake for Cake at Stake.

The Leafy Recovery Center (LRC) was introduced on "Insectophobe's Nightmare 2". It was given to Leafy by Announcer as a reward for making it to the Final 3.

The Hand-powered Recovery Center (HPRC) first appeared in "Zeeky Boogy Doog". There is an "ENTER NAME" box which allows someone to type the name of the person to revive and a green "GO" button to revive the person as they go out through a small hole. It does not have a backspace button, however. It was discovered in the BFDIA 5b game that the HPRC broke in two when Evil Leafy ate the FreeSmart Van, but it still works. Due to one piece having the typing part and the crank and the other having the hole, it can be used to recover objects in different places than where the user is. In "No More Snow!", the first HPRC was destroyed, but was created again with an HPHPRCC. However, this HPRC got stuck in the gluey snow-gasoline mixture from the FreeSmart Supervan.

The Hand-powered Hand-powered Recovery Center Creator (named HPHPRCC by Yellow Face and named a Hand-powered HPRC Creator by Firey Speaker Box) was introduced in "No More Snow!", brought by Firey's Speaker Box. It can take possibly over a month (for the contestants on the right, it took 78 days) of cranking in order to produce the HPRC. This recovery center is the only machine out of the recovery centers and recovery center creators to be colored maroon. It is also probably the largest. As soon as the HPRC is made, the HPHPRCC has a 50-50 chance of exploding or disappearing without a trace fifteen seconds after, unless a Postpone Token is inserted, which resets the timer back to 15 seconds.

This recovery center was introduced in "It's a Monster" when Pencil drove the FreeSmart Supervan and pointed out the Leg-powered Recovery Center (LPRC). This supposedly works like an HPRC, except you use your legs to use it. If cranked with someone's hand, it will disappear, as shown when Book tried to crank it with her hand.

The Pie Recovery Center's first and currently last appearance is in "Getting Teardrop to Talk", being sucked up by Black Hole. 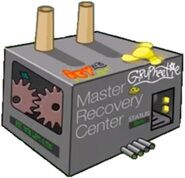 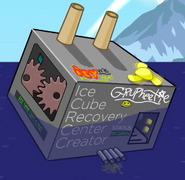 The user manual of the HPHPRCC 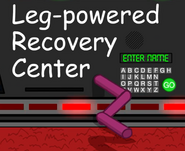 The LPRC disappearing after Book tried to operate it by hand

The BRC from BFB

The Master Recovery Center Creator (MRCC) that appeared as a recommended character in BFDIA 2.