Tree-mote (Four, along with Tree)

Remote is a female contestant on Battle for BFDI and The Power of Two. She was one of the 30 recommended characters in "The Reveal" and "Reveal Novum". Along with Pie and Grassy, Remote only received 7 votes, which in turn placed them at 16th and she was sent into the LOL.

Remote had a chance to join IDFB along with the other TLC prisoners, but she failed to join with 54 votes.[1]

Remote would finally compete in BFB on the team Death P.A.C.T. until she quit in "The Escape from Four".

Remote is currently competing on TPOT on the team Death P.A.C.T. Again.

Remote's BFDI design appears to be a gray rectangle with 19 buttons, one red and one blue, with a center button with side controls, and no white facial features.

Remote works as somewhat of a correspondent for Death P.A.C.T., often stating what's going on with them, even reporting in one incident that "our team has now prevented 0.00 deaths.", hinting that she wants to prevent death. She's generally peaceful and well-meaning. She also seems to be very considerate, as she showed concern when Liy was being circled by forks in "Today's Very Special Episode".

Remote is also competitive. She aims to win the challenges and can be frustrated when her teammates don't follow or agree with her ambition. Despite this, she is willing to learn to prioritize preventing death even if it goes against her innate desire.

Remote can send and receive infrared signals. She loves batteries, because without them, she would faint. She has a robotic voice, although she definitely has feelings. One of those feelings is to be a person and not a tool. Regardless, she's willing to help as a data-storage tool for Liy to track her death prevention rate.

Did You Know?: Remote gets the best wireless signal out of everybody, which is both helpful and dangerous.

(Note: There is some Morse code by Roboty on this page reading "BATTERIES".)

In "Don't Lose Your Marbles", Remote made her first appearance, being held by Blocky. Blocky got hit by a ball thrown by Leafy, causing him to drop Remote. Her batteries fell out, and the acid killed Snowball and Pencil.

In "The Reveal", Remote was a recommended character who could have joined the game. In the campaign video, Remote pulled out her own batteries and fell unconscious.

In "Reveal Novum", Remote placed 18th place, with only 7 votes together with Grassy and Pie. The 3 contestants were sent flying into the LOL along with the rest of the 26 other recommended characters.

In "Return of the Hang Glider", she watches the final Cake at Stake in the large crowd of recommended characters.

In "Yeah, Who? I Wanna Know", Remote was one of the many recommended characters who could've joined season two but placed 34th with only 115 votes, which wasn't enough to join and she was sent to the LOL.

In "Welcome Back", Remote is given a chance to join the show and leave the TLC. Even if the season continued, she wouldn't have had enough to join.

In "Getting Teardrop to Talk", Remote is first seen when Pin asks if she has seen her blueberries seeds. Remote says that she hasn't but has a fork, which Yellow Face takes. Later, Remote pulls Pen over to her team since he was the last one picked.

In "Lick Your Way to Freedom", Remote looks inside an empty jawbreaker.

In "Why Would You Do This on a Swingset", Remote reports to Liy that their team has prevented 0.00 deaths. She is also sprayed with Fork Repellent by Liy in order to stop Gelatin from killing. During the challenge, when Black Hole says that can't push but could pull like there's no tomorrow, Remote takes this literally and says that there is a tomorrow.

In "Today's Very Special Episode", Remote shows concern on the forks strangely circling around Liy. This then results in Liy's gravitation pulling Gelatin's forks away from the pile and towards Four. Remote jumps into the forks with her teammates in order to protect Four, to avoid getting zapped. To get Black Hole's attention, Pillow persuades Remote and the others to go and inform Black Hole of the situation, which they end up doing. Death P.A.C.T. lost the challenge because of Pen's drawing and is up for elimination.

In "Fortunate Ben", during Cake at Stake, Remote is safe with 1,370 votes and she gets a fortune cookie as a prize. Remote's fortune reads out "Ice Cube is the best thing to ever grace this universe". She then replies that it's not true and that batteries are really the best. After Liy is eliminated, Remote reveals that they're team prevented 2,763 deaths. Only 10 of which were without Liy.

In "Four Goes Too Far", Remote is only seen in the heart scene, and when Tree tells the team to close their eyes.

In "The Liar Ball You Don't Want", when the contestants are arguing about Loser, Remote says he doesn't deserve the criticism for his lie. During the challenge, A Better Name Than That control Remote from the moon, using Robot Flower, to defend theirs and

's goals. Just as Pen is about to push the Liar Ball into

's goal, Remote is controlled into stopping him. Pen asks what she's doing, and she tries to ask for help. Meanwhile, Grassy pushes against the rocket when it becomes unstable, which makes them lose control of her. Freed from the connection, Remote types the word "PANIC" using her buttons and sends a bomb into the signal, saying "Not today, whoever you are". After learning that the bomb would kill both her team and

, Robot Flower breaks the signal. Remote ultimately causes ABNTT to lose the challenge as she pushes the ball into their goal. It is at this point that the bomb she sent is planted back into her and she explodes, blowing Loser into space in the process.

In "Enter the Exit", Remote is recovered. Robot Flower points out to her team that she was the one who sent them a bomb. Remote is also genuinely surprised to see that they were the ones who hacked her. Pie is disappointed with her as that isn't preventing death. Remote replies that they were about to lose, and Black Hole tells her their team objective is about saving lives, not winning.

In "Get to the Top in 500 Steps", Remote gets worried about seeing Pie's lack of urgency to get to the top before Flower. Black Hole says she was preventing her own death since Flower would kill her if she gets ahead of her. Remote then angrily says that they'll lose, to the reply of Black Hole stating she was a slow learner. Luckily for Remote, Pie falls off, and Black Hole swirls her up to the top so she can press the button, meaning their team is safe.

In "What Do You Think of Roleplay?", she is briefly seen at the beginning with Black Hole when Bomby slams a door into her. During the challenge, she, along with the rest of her team, is shocked and angry to see Tree kill Bottle. Tree ends up getting discovered to be the impostor on Remote's team, which is then safe.

In "Return of the Rocket Ship", Remote follows her team towards the Evil Canyon to look for X's treasure. Black Hole immediately stops them, telling them that going to the Evil Canyon would be very dangerous and that they should care about Pillow's death. The rest of Death P.A.C.T., alongside Remote, start arm fluttering, much to Black Hole's dismay. However, Pie suddenly stops and tells everyone else that they should be caring about Pillow, but Remote keeps arm wiggling and appears to be unresponsive when Black Hole tells her everyone else stopped. She and the rest of her team then get eaten by Four so that they can search for Pillow, who, according to Four, is not dead.

In "Don't Dig Straight Down", Remote reaches her arms out of Four's mouth to grab an emerald.

In "The Four is Lava", Remote, Bottle, and Pen have fun sticking their arms out of Four's mouth and have Black Hole repeatedly swing them back up to it every time they are pushed off. Doing this too many times makes Four put his hand in his mouth, pushing Pen, Bottle, and Remote off, and throwing the entire team out of his mouth, which also makes Death P.A.C.T. safe from elimination.

In "The Escape from Four", Remote is seen walking towards a struggling Four with the other contestants. She then attempts to help pull the eliminated contestants out of Four, along with everyone else. Remote ends being one of the 40 contestants to join TPOT.

In "You Know Those Buttons Don't Do Anything, Right?", Remote agrees to stay with the rest of Death P.A.C.T.. When Pie wonders if Pen has prevented death at all, Remote responds with, "not that I remember". Once her team team is full, it is named Death P.A.C.T. Again. She is later asked by Two what color the trees and grass were, to which she responds saying that they were green and yellow. However, Two takes this the wrong way and turns the trees green and the grass yellow. Remote starts trying to correct them, before being stopped by Naily.

During the challenge, Remote hands Tree a megaphone when he's trying to talk to Lightning, who has already completed the challenge. Remote is confused as to why he isn't coming back down. Later, when her team is debating strategies, she begins telling her team her plan while drawing a visual representation on the building wall using Marker, the plan being that her team climb enough stairs and then jump from a window to use Black Hole's gravity to push them up to the roof. Later, when her team is exhausted from the climbing, she throws a potted plant out of the window in order to test if they were high enough, which doesn't work. After collapsing from exhaustion, Fanny changes Remote's battery, which recharges her and allows her to come up with a different strategy, which involves her team taking the last few flights of stairs and alerting Black Hole once they make it to the top. The rest of the team is too tired, so she simply carries everyone up.

Once her team makes it to the top, Remote urges them to hurry and get Black Hole's attention, until she remembers he doesn't have the best sense of hearing. Lightning then tells the team they can't go back down to get him, and Remote forgives Lightning for not coming back down earlier. Tree accidentally drops the megaphone Remote gave him earlier into Black Hole, which gives the team an idea of dropping something next to Black Hole to get his attention. Remote then takes out her battery to use for this strategy, sacrificing herself in the process. Her team ends up losing due to The Strongest Team on Earth managing to barely beat Black Hole to the top, putting her and the rest of her team up for elimination. 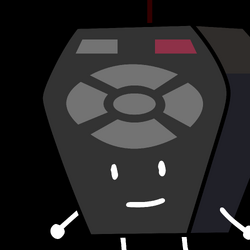