View source
watch 01:54
Who is Robot Flower?
Do you like this video?
Play Sound

BFB: "A Better Name Than That"

TPOT: "The Strongest Team on Earth."

Robot Flower is a female contestant in Battle for BFDI and The Power of Two. She was one of 30 Recommended Characters who had a chance at joining Battle for Dream Island during "The Reveal" and "Reveal Novum". However, she failed to get into the game, receiving only 11 votes, and was sent to the Locker of Losers.

Robot Flower also had a chance to join BFDIA, but only got 112 votes which wasn't enough to join the game and she was flung to the TLC.

She also had another chance to join IDFB, until it was postponed, and she didn't got enough votes to join, with 88 votes.[1]

Robot Flower finally got to be a contestant in BFB and she was on A Better Name Than That.

Robot Flower switched to TPOT in "The Escape from Four" and is competing as a member of The Strongest Team on Earth.

She is a robotic version of Flower, with 5 metal petals that seem to function as buttons, as Tennis Ball used them to control Remote in "The Liar Ball You Don't Want". Her petals light up when she speaks. She appears to be made entirely of metal and is covered in bolts. Aside from her gray body, she is colored almost exactly like Flower and has an auto-tuned voice that sounds like that of Flower. However, unlike her counterpart, Robot Flower's petals are asymmetrical, and she does not have facial features.

Although Robot Flower has a very similar appearance to Flower, she acts like an entirely different person. While Flower was selfish and tried to accomplish tasks better than others, Robot Flower can have common sense and is willing to make sacrifices if it means protecting her friends. She also likes to show pride in her accomplishments and is good at following orders, even from people she doesn't like.

She can stand up to her allies to point out the obliviousness of others, and saved ABNTT and

’s lives, even though it caused her team to lose the contest in BFB 7.

If Flower were to turn into a robot, she'd look like Robot Flower. As all robots do, Robot Flower interfaces with technology and converts sensory inputs into data. When she speaks, her metal petals light up.

Like Flower, Robot Flower is demanding and selfish, but she believes she has more integrity than Flower. She is also competitive and capable of disobeying orders when she thinks they're wrong. This sometimes ruffles Golf Ball's dimples.

Did You Know?: Robot Flower's centerpiece is a lens.

In "Half a Loaf Is Better Than None", Robot Flower walks into a vat of hydrochloric acid to retrieve the Announcer's marbles.

In "Bowling, Now with Explosions!", Robot Flower appears in a crowd of recommended characters who are watching the Cake at Stake. They are all sealed in a metal box by the Announcer, which randomly sets on fire in the stinger ending.

In "The Reveal", she appears as one of the 30 recommended characters that could debut as a contestant. In her audition, she repeats Flower's line of "Vote for me or I'll crush you!"

In "Reveal Novum", she receives 11 votes to join, which is not enough. She is flung to the LOL. As she is flying through the air, she yells to the tune of "Smaller cap = less plastic".

In "Return of the Hang Glider", Robot Flower watches the final Cake at Stake from the bleachers with the other recommended characters.

In "Yeah, Who? I Wanna Know", Robot Flower receives 119 votes to join the season; once again, it is not enough and she is sent to the TLC.

In "Welcome Back", Robot Flower is given a chance to join the show. She can be seen idling in the TLC.

In "Getting Teardrop to Talk", Robot Flower is selected by Golf Ball to join A Better Name Than That, due to the fact that she is a "mechanical mind". During the challenge, Golf Ball assigns Robot Flower and Blocky the task of climbing the tree, as they were some of the few Better Namers to have arms. The two then climb the tree, with Blocky mounting it first. Despite this, Robot Flower proclaims that she was first and pushes Blocky off the tree when he disagrees.

In "Lick Your Way to Freedom", Robot Flower informs Blocky that the recovery centers were destroyed. She later yells at Four demanding for her dead teammates to be brought back.

In "Why Would You Do This on a Swingset", Robot Flower and Basketball tell Golf Ball that 8-Ball is a better leader than her. When Golf Ball tries to give the team instructions, 8-Ball says the opposite of what she says; Robot Flower and her team obey 8-Ball's instructions. One of which include turning purple, which only she and TV do.

In "Today's Very Special Episode", Robot Flower is one of the characters who are climbing Bell's string, only to get zapped off later. Robot Flower continues to follow 8-Ball's instructions throughout the course of the challenge. When 8-Ball and Golf Ball make up, she is the only one on their team who notices, but TV tells her to stop talking.

In "Four Goes Too Far", she helps her team multiply Four by Zero. In the challenge, she rides in Golf Ball's rocket to the Moon to avoid the twinkle, only to have

follow them, with the twinkle. She faces off against

as the twinkle switches between the two teams. Book reasons that the twinkle could go back to earth, but Robot Flower says that's highly unlikely. However, the twinkle does get taken off the moon, making Robot Flower's team safe, but Golf Ball's rocket breaks, stranding them on the moon.

In "The Liar Ball You Don't Want", Basketball reveals that after 2 weeks of inspection, Robot Flower can send data to Golf Ball's ship. Golf Ball tells Robot Flower that they'll be using her to hack into Remote's mind to win the contest. Golf Ball then says that they have to trust with not breaking the signal and Robot Flower promises. With that, Grassy turns on the communicator disk, which sends Robot Flower into the Data Void where she manages to secure a connection to Remote. However, thanks to Grassy moving the ship, the connection becomes unstable. This allows Remote to send a bomb to get rid of whoever is hacking her. Robot Flower panics upon seeing this and notices a close connection option that seemingly came out of nowhere. After thinking about it, she closes the connection to make sure everyone lives, making them lose the contest in the process as Remote pushes the Liar Ball into ABNTT's hole. Robot Flower closing the signal also results in Remote getting blown up by her own bomb.

In "Questions Answered", she and the rest of her team and

are brought back to earth with Donut's help. She is safe with the third most votes, 3,105.

In "This Episode Is About Basketball", Robot Flower is only seen in a crowd shot when Donut attempts to pick the 9th contest.

In "Enter the Exit", Robot Flower reveals to her team that Remote was the one who tried to send them a bomb.

In "Return of the Rocket Ship", Robot Flower launches Fanny across a set of Recommended Characters after Fanny was talking to Grassy, saying that she is on a different team. She also ends up fixing Fanny in the process

Later on in the challenge, Golf Ball tells Robot Flower that she must get along with broken machines, to which she responds, "What's that supposed to mean?". Golf Ball then orders her to get her broken rocket from the moon, to which she obeys and retrieves it quickly.

In "Don't Dig Straight Down", Robot Flower's team finds an emerald. She and the rest of her team wall-jump to bring the emerald to Four. When Death P.A.C.T. takes her team's emerald in order to win the contest, Robot Flower exclaims that they can't do that.

Later on, while Golf Ball is trying to prevent iance from breaking out to the surface, Robot Flower tells her to stop, and says that she has done it 2,763 times. Robot Flower agrees with Blocky that this is a pain.

In "The Four is Lava", Robot Flower is stuck in a tree with Blocky and Tennis Ball. When Blocky flings himself away with the tree they were on, Robot Flower tries to catch him, even if it means getting through the lava to do so. Although the lava doesn't kill her, she begins to overheat and glitch and goes back up the tree. When the lava has drained, Robot Flower races to Four with Tennis Ball but continues malfunctioning. She remembers that Basketball knows how she works and uses her speed to get to Four while holding Tennis Ball, making A Better Name Than That safe. She then has Basketball recovered so that she can fix her.

In "The Escape from Four", Robot Flower is first seen walking towards Four to watch him struggle at sucking up Spongy. Robot Flower later quits BFB to compete on The Power of Two.

In "You Know Those Buttons Don't Do Anything, Right?", Robot Flower and Grassy are invited to form a team with Basketball after she breaks away from Golf Ball for insulting her. Robot Flower tells Basketball that she is impressed with how she stood up to Golf Ball and points out that this is her first time on a team with no other balls, which later turns out to be false. During the challenge, Robot Flower and Grassy immediately ride Bell to the top of the Hotel. Robot Flower tells her to go back to get the rest, but Bell cannot go back down due to Two's rule. Robot Flower is at the top for the rest of her challenge, but her team eventually reaches them and avoids being up for elimination. When everyone starts attacking Two for not saying one of the rules clearly, Robot Flower hits them with her head twice.

In "The Worst Day of Black Hole's Life", Robot Flower is revealed to run a shop called "STUFF FOR YOUR SELF" on the first floor of the Hotel. Death P.A.C.T. Again attempts to order a battery from her to revive Remote, but she gives them various miscellaneous objects instead, including a laser gun. When Two begins the challenge, Robot Flower says it is great and that she loves squares. Several other characters then ask how she feels about other shapes, which makes her uncomfortable.

During the challenge, Bell asks for Robot Flower to give Grassy more blocks so they can be delivered to Snowball at the top of their stack, but Robot Flower instead drops a pile of batteries. When she does it a second time, Basketball drags her away to see what is wrong. They go to the fourth floor of the Hotel, where Basketball discovers someone placed an order of 3000 items on her shop and deduces that is why Robot Flower is malfunctioning. Marker's paper clip then flies into the room and resets Robot Flower, surprising Basketball. Basketball mistakenly thinks the paper clip is a "robot splinter" and pulls it out. The reset removes all the orders from Robot Flower, but Basketball thinks that she fixed Robot Flower by pulling out the splinter. When they notice time is almost out, Robot Flower drags Basketball to their tower. Their team has no blocks stacked when the challenge ends, so they are up for elimination. 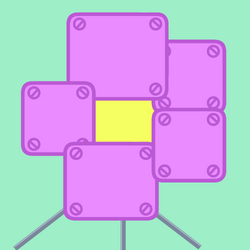