Battle for Dream Island Wiki
Register
Don't have an account?
Sign In
Advertisement
in: Recommended Characters, Males, Characters,
and 9 more

BFDI: 500 for Frequency, 100 for volume, 30 for Character and Farnsworth speed

Roboty is a male contestant on Battle for BFDI. He was one of the 30 recommended characters who had a chance to join the game during "The Reveal" and "Reveal Novum". He failed to get into the game, receiving only 2 votes, which was the least and placed him 30th.

Roboty got only 50 votes to join Battle for Dream Island Again, which wasn't enough and he was flung to the Locker of Losers.

He competed briefly in Battle for BFDI on Beep, but was eliminated in Four Goes Too Far". He will also be making appearances in Battle for Dream Island: The Power of Two.

Roboty is a large, red, limbless robot with an antennae. His metal body is scarlet, his teeth are yellowish-white, and his eyes are jade.

Roboty seems to be stubborn and opinionated about his current situations, such as going to a waterfall to be far away from his team in "Lick Your Way to Freedom". Other examples include Roboty saying "WHY" when he got placed for his job, as well as when he said "TRULY UNFAIR" when his team lost in the same episode. Similar to David, Roboty is mostly anti-social. When Roboty was voted out in "Four Goes Too Far", he left to the same waterfall without saying a word, implying that he never enjoyed being on the show. Hidden in his simplistic Morse Code, Roboty seems to be a very negative individual, often lamenting about how unpopular he is in the eyes of voters. He also seems to enjoy teasing others, such as mocking his team name along with Four, angering Balloony. Roboty's nihilism is further showcased as he doesn't care how he is used or what people do with him. Some examples of this are Liy pushing him out the way like he is an obstacle, Firey Jr. using him as a chair, and Loser stacking him with the other items to escape the EXIT.

Roboty avoids conflict if he can. He does not want to put his big red self in the middle of trouble. In contrast, his highest place of comfort is an ethereal misty waterfall, where he cannot hear the noises of his teammates.

Roboty speaks in Morse code, a series of electronic dots and dashes. That's why no one can understand a word he says! Roboty isn't very mobile, but surprisingly, his springy antenna gives his teammates lots of mobility!

Did You Know?: Roboty's chest compartment has been open as many times as Teardrop has spoken.

In "Half a Loaf Is Better Than None", he appears as a recommended character and walks into a vat of hydrochloric acid.

In "Vomitaco", six of him appear under the name "Clones" as a recommended character.

Roboty is one of the 30 recommended character eligible to join BFDI in "The Reveal".

In "Reveal Novum", he only receives 2 votes, the least out of anybody. He is flung to the LOL.

In "Return of the Hang Glider", Roboty can be seen with the numerous recommended characters on the bleachers, watching the final Cake at Stake.

Roboty is eligible to join BFDIA, but only receives 50 votes in "Yeah, Who? I Wanna Know", placing 57th, and he is flung to the LOL.

In "Welcome Back", Roboty can be seen jumping in the TLC as attempt to open the lid. Pin says that they should free Roboty first so that Golf Ball can use his red tint to recolor her. Roboty is then shown on a voting screen as a choice to be voted back into the show.

In "Getting Teardrop to Talk", Roboty's first appearance is in the intro as Black Hole is headed towards Earth. Leafy chooses Roboty as her first teammate because she wants to give him a helping hand. Roboty responds by beeping, which translates to "DON'T", showing that he doesn't accept Leafy's request. He is then greeted by a hug from Leafy and is now a part of her team anyway. After Roboty's newly-formed teammates all come up with the perfect team name, Balloony tells Roboty to pass it on to Four. However, because Roboty is only able to communicate in morse code, their team name becomes "Beep". During the first challenge, Balloony uses Roboty's antenna as a spring in order to reach the basket.

In "Lick Your Way to Freedom", X informs Beep that Roboty is missing and that Four won't like that. The episode then cuts to a scene where Roboty is beside a cascading waterfall in a remote location, to enjoy his peace and quiet. When Woody can be heard calling out his name, Roboty turns up the volume of his music to avoid being disturbed. However, because the volume ended up being too loud, that nearly causes the plank Roboty was on to turn. He is later seen inside a beaker full of jawbreakers, unable to move. Cloudy spots him inside and asks him how's it going in there. However, Cloudy then drops the jawbreaker he was holding onto Roboty, resulting in him being crushed. This causes Woody to scream. Roboty is then seen next to the waterfall again beeping "truly unfair", but this time he is still crushed.

In "Why Would You Do This on a Swingset", Beep lost and have to partake in Cake at Stake. Roboty is crushed, but is still responsive as he beeps at Leafy. When Roboty ends up in the bottom three, Nickel is having a conversation with Cloudy about which one they could do without. Nickel's answer is "machine", meaning that he could do without Roboty. Roboty receives 3,436 votes, which is the 3rd most. After receiving the prize at Cake at Stake, it seemingly causes Roboty to recover from his crushed state. During the challenge, Roboty comes up with the idea to have Cloudy push the swing, which he agrees to.

In "Fortunate Ben", Roboty encourages David when he's piloting the team's paper airplane. However, Beep loses after Stapy's staples split the ground into two, causing Beep to hit the ground before Free Food.

In "Four Goes Too Far", Balloony complains to Four that he said their team name wrong, to which Roboty responds with two beeps, mimicking what Four said. Balloony responds by saying that Roboty isn't helping. Roboty is then eliminated with 8,254 votes. Before his teammates can say their farewells, Roboty leaves without being seen, and returns back to the waterfall.

In "The Liar Ball You Don't Want", Roboty's name, shown as "RBTY", can be seen in the Data Void along with TV's.

In "Enter the Exit", Clock tells Four that Roboty was eliminated, but nobody knew where he went. Four then proceeds to track Roboty down back to the waterfall scene. Four sucks up Roboty along with all the other recently eliminated contestants to the EXIT. Roboty, along with the other recently eliminated contestants enter the classroom where Four says that one of them will rejoin. For his rejoin confessional, Roboty beeps out "4 SUX".

In "Get to the Top in 500 Steps", Roboty receives 558 votes, which was the least amount of votes to rejoin.

In "Return of the Rocket Ship", Roboty makes an appearance as a drawing by Cloudy on a whiteboard in his collection.

In "Don't Dig Straight Down", when Woody falls through the Waterfall, he associates the location with Roboty and calls out his name.

In "The Escape From Four", Roboty is positioned horizontally on the floor to serve as Firey Jr.'s desk. He is used later on the pile Loser builds to reach Four's mouth.

In "Chapter Complete", Roboty can be seen with the other EXITors in Four's imagination, but he does not speak or move. Later, Four snaps and Roboty, along with the other imaginary EXITors, disappears.

In "You Know Those Buttons Don't Do Anything, Right?", Roboty falls to the ground after Stapy knocks down the pile of items that he was stacked in. 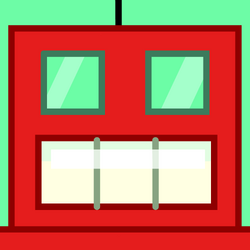