Battle for Dream Island Wiki
Register
Don't have an account?
Sign In
Advertisement
in: Pages or sections out of order, Items, Season 1 items,
and 5 more

Rocky's vomit resembles normal vomit, as it is two shades of chartreuse, pine green, and orange, however in "The Reveal" it appeared to be green, and in "Rescission", it is a shade of brown.

In "Lick Your Way to Freedom" and "Return of the Rocket Ship", Rocky's vomit glows lime green as it is extremely acidic.

Rocky first got his vomit in "Sweet Tooth", and according to Tennis Ball, after he started vomiting, he didn't speak a lot (as his only other line was in "Rescission"). From that point forward, he started communicating by vomiting and "saying" "BULLEH". He has vomited on various people throughout the course of the series.

However, he lost the ability to vomit in "Return of the Hang Glider", due to Spike Ball Speaker Box breaking the Vomit Generator inside Rocky's mouth, but he somehow got it back somewhere between "The Long-lost Yoyle City" and "Welcome Back".

While he couldn't vomit throughout BFDIA, Rocky can be seen dripping a purple liquid from his mouth in "Get in the Van".

In "Lick Your Way to Freedom", it's shown that Rocky can barf acid. For Rocky to vomit more acid, he must consume something. In "Don't Dig Straight Down", he devoured Nickel and vomited acid.

In "Today's Very Special Episode", Rocky's vomit is used as a cake batter, making a cake over for Four. 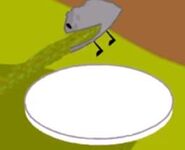 Rocky barfs to make it to the top of the ladder.

Rocky barfs on Golf Ball while running who gets hit by the tree. 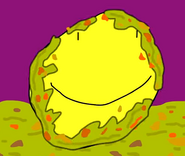 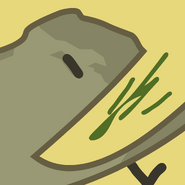 Leafy gets barfed on.

Woody holding cake batter made out of Rocky's vomit