< Rocky
View source
watch 02:56
Doctor Strange in The Multiverse o Madness - The Loop
Do you like this video?
Play Sound

This page is about the relationships and interactions between Rocky and other characters.

Rocky does not often express either amity or hostility to his fellow contestants. However, due to his frequent barfing, many contestants find him disgusting, and therefore harbor (typically unrequited) hostility towards him.

In "Don't Lose Your Marbles", Rocky doesn't like the new elimination area and pretends to like it when the Announcer says he was supposed to like it.

In "The Glistening", when the Announcer asks who wants to go back to earth, Rocky raises his foot.

In "Return of the Hang Glider", when the Announcer reveals that he sold Dream Island, Rocky screams. 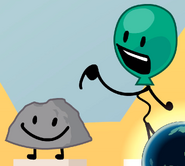 In "Don't Dig Straight Down", which is their first direct interaction, Cloudy asks Rocky if it's nice to be short (due to Balloony getting killed by the lava because he was the tallest) and Rocky makes a sound in agreement.

In "You Know Those Buttons Don't Do Anything, Right?", Rocky makes a team with Yellow Face and Cloudy. During the challenge, Rocky barfs inside Cloudy when he falls into him.

In "Insectophobe's Nightmare", Rocky barfs in Coiny's mouth. Coiny refers to Rocky as "it."

Status: Enemies, on Coiny’s side

In "Fortunate Ben", Rocky barfs on David to wake him up.

In "Puzzling Mysteries", Rocky wants Firey to join his team.

In "Crybaby!", Rocky vomits on Firey during the handstand contest.

In "Lofty", Rocky barfs on Firey, who then remarks that Rocky has serious vomiting issues.

In "Don't Pierce My Flesh", Rocky vomits on the Firey Speaker Box, making Firey slap him.

Status: Friends, on his side

In "Don't Pierce My Flesh", he vomits on the Firey Speaker Box.

In "You Know Those Buttons Don't Do Anything, Right?", Rocky barfs on Foldy in order to make himself land on the building.

In "Get Digging", Fries gives Rocky a shovel and tells him to dig for ingredients; Rocky proceeds to do so.

In "Insectophobe's Nightmare 3", Rocky eats one of Fries' poisoned fries and dies.

In "Get in the Van", Gelatin pushes Rocky, Golf Ball, and Tennis Ball off of Puffball. Rocky doesn't seem to mind this as he smiles during the fall.

In "Are You Smarter Than a Snowball?", Rocky is sad because Golf Ball gets mad at him for not doing his test.

In "Cycle of Life", when it's Golf Ball's turn to carry Rocky, Rocky barfs on her face and causes her to crash into a tree.

In "Get in the Van", Rocky agrees to never switch from Golf Ball's team.

In "Power of Three", he vomits on Ice Cube.

In "Cycle of Life", he just happens to vomit on the slice on the wheel that Ice Cube was on.

In "Reveal Novum", Rocky barfs on Ice Cube, causing her to blink.

In "You Know Those Buttons Don't Do Anything, Right?", Ice cube sits and stands on Rocky's head in several scenes.

In "Reveal Novum", Rocky votes for Leafy to be eliminated in the contestant vote because of her arms.

In "Return of the Hang Glider", when asked who he'd like to win, Rocky vomits Leafy's shape.

In "Getting Teardrop to Talk", he seems to be happy to join Leafy's team; he later vomits in her face.

In "Lick Your Way to Freedom", according to Leafy's chart, Rocky is the most loyal to her.

In "Get to the Top in 500 Steps", Rocky is the only Beep contestant who doesn't back away from Leafy when she rejoins; Balloony pulls him away instead.

In "Don't Dig Straight Down", when Naily suggests that Beep help break through the wall, Rocky starts to bang against the wall repeatedly until he dies.

In "Lick Your Way to Freedom", Nickel points out how Rocky doesn't have a job yet.

The two almost never interact, their closest moment together was at the start of "Getting Teardrop to Talk", when Rocky accidentally tripped Pen.

Rocky and Pencil seem to have an ongoing conflict throughout the episodes.

In "Reveal Novum", Rocky attempts to make Pencil lose the staring contest by vomiting in her face. Pencil ends up winning by throwing his vomit into his face.

In "Rescission", Rocky asks Pencil if she's glad that he didn't vomit on her, marking the first time he's spoken since BFDI 1. When Pencil asks if it feels weird to talk after going so long being silent, Rocky vomits on her.

In "Return of the Hang Glider", when Rocky's infinite matter generator is destroyed, Pencil says "Finally, no more vomit", Rocky responds by barfing a spike in her face.

In "The Long-lost Yoyle City", Pencil kicks Rocky into a Fish Monster's mouth, killing him.

Rocky about to be killed by Pencil for barfing on her

In "Get Digging", Rocky backs away when Pin asks if anyone wants to switch to their team.

In "Get in the Van", Rocky jumps over a knife that Pin threw.

Rocky and Puffball have never really interacted with each other. Their closest interactions are when Rocky gets on top of Puffball so she can fly the team to the summit of Yoyle Mountain. Rocky might be enemies with her as he is frowning when Puffball starts to shrink and makes him fall.

In "Take the Plunge: Part 1", Rocky greets Snowball when Snowball shakes him awake.

In "Bridge Crossing", he's thrown into a gorge by Snowball where he presumably drowned.

In "Power of Three", Rocky spends the entire challenge being carried by Snowball.

In "Take the Plunge: Part 2", Rocky, along with a lot of the other contestants, uses Spongy as a boat to ride to the finish line.

Rocky and Spongy start their friendship in "The Reveal", they become partners for the Frisbee challenge and get second. They both get 100 points.

In "Reveal Novum", they both vote for Leafy to be eliminated.

In "The Glistening", Rocky helps the others push Spongy into the ship to be used as fuel.

In "Take the Plunge: Part 1", Rocky is pushed off the balance beam by Teardrop, not that he cares.

In "You Know Those Buttons Don't Do Anything, Right?", Rocky is held up by Tree so that he could use him to barf on Two.

In "You Know Those Buttons Don't Do Anything, Right?", Rocky barfs on Two.

Rocky doesn't interact much with Woody. In "Take the Plunge: Part 1", Woody falls on him and loses a chip.

In "This Episode Is About Basketball", Rocky vomits on Woody and later cheers when Woody manages to get a ball in the basket.

In "What Do You Think of Roleplay?", Rocky, disguised as Puffball, barfs on Yellow Face. This gives him away as the impostor.

In "You Know Those Buttons Don't Do Anything, Right?", Rocky uses his foot to get Yellow Face's attention, as he wanted to team up with him and Cloudy.

In "X Marks the Spot", Rocky cheers when X is glued to the ground so he can continue as their host.

In "Insectophobe's Nightmare", Rocky causes their team to place second by vomiting in front of their path, causing them to slip.

In "Crybaby!", he causes the team to get stuck in a large snowball when they hit him during the skiing contest. He later vomits on the team during the handstand contest.