Battle for Dream Island Wiki
Register
Don't have an account?
Sign In
Advertisement
in: Non-canon, Characters, Non-Contestants,
and 4 more

cookiedere
Sam is the main protagonist in Salmon Fiveyears, where he was being constantly hit by knives.

In Salmon Fiveyears, Sam (and their clones) are being hit by knives. Later, Sam does a dance, his hair changes color, turns rainbow, earths with their hair are shown, colored people walk around, and Knife from Inanimate Insanity shows up.

Sam appeared again in Thanks for 4 years of Thanks for 4 years! where Yellow Cary shows that on the release of the aforementioned video, it was five years since Salmon Fiveyears was uploaded to YouTube. The video then shows a photo of Cary Huang and a few other people with Sam crudely drawn in with the text "THIS IS SAM IN FIVE YEARS".

Sam, under the name "salmon fiveyears", appeared as a recommended character in "The Four is Lava" when Four was grabbing the some of the members of

and appeared in a crowd. Sam is seen submerging in lava, and likely died from it.

In their original appearance, Sam appears to be a humanoid stick figure. His skin is peach, and his hair is magenta. He seems to have been drawn very quickly and somewhat poorly, similar to other Stick Figures and Yellow Cary.

In Battle for BFDI, Sam is a David with their pink hair from their previous version. 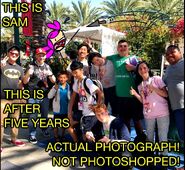 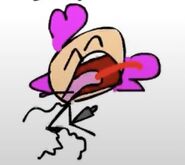