View source
watch 01:41
Who is Saw?
Do you like this video?
Play Sound

Saw is a female contestant in Battle for BFDI and The Power of Two.

She also had a chance to join IDFB along with the other TLC prisoners, but she received only 46 votes, tying with Tree.[1]

She competed in BFB as a member of

until the split in "The Escape from Four".

Saw currently competes in TPOT on the Team8s.

Saw appears to be a hand saw, a type of hand-held cutting tool, specifically used for cutting pieces of wood.

Saw is somewhat worrisome, and she also tends to complain a lot, sometimes yelling at others when things go wrong. However, this side of her isn't really meant to be hostile. Saw also displays a level of common sense, as she scolds Liy for squeezing Four, saying "we don't know what it does". After Taco "abandoned" her team, she wasn't on good terms with her, until BFB 7, in which she is shocked to see Taco dead.

If you were cutting a piece of wood in the middle of a lava flow during a volcanic eruption, it would be okay to use Saw. She is very sharp and can withstand the hot temperatures.

Still, cutting things is not really Saw's calling. It's not that she doesn't like slicing things up, although she may, but it's quite possible she doesn't like being held. We have to wonder, then, why she likes to experiment with different handles.

Did You Know?: When Saw wants to nibble on snacks, she has to be careful about which set of teeth to use.

Saw has returned after disappearing since "This Episode is About Basketball", and she is still under the influence of 8-Ball's Fumes, as she shouts "eight" when she says a word that has the "eight" sound in it.

In "The Reveal", Saw is one of the 30 recommended characters who can join the game. In their audition they saw Woody.

In "Return of the Hang Glider", Saw watches the final Cake at Stake from the bleachers with the other recommended characters.

In "Yeah, Who? I Wanna Know", Saw only receives 36 votes, and does not join the game. She is then sent to the TLC.

She is one of the many prisoners in the TLC in "Welcome Back". She also tries escaping the LOL by attempting to saw a hole in the lid. She is given a chance to join the show by being voted out of the LOL.

Saw's first speaking role is in "Getting Teardrop to Talk". She is used by Blocky to slice a pentagon into a quadrilateral and a triangle, much to her discomfort.

She is seen later telling off Liy, stating that she "doesn't know what it does", referring to Four when Liy squishes him. During team choosing, Gaty tells Saw to join her team, and Saw says that she'll bring along Lollipop and Taco, both her friends. When the teams are named, they are the last one to do so. They all say their names at once, combining to make team name

. Before the challenge starts, Saw, Book, and Teardrop flutter their arms, telling Four to delay the challenge, but Pillow says that everyone's ready.

takes off into The Desert in pursuit of the basket. The team loses Ice Cube, Lollipop, Teardrop, Book, Gaty, and Taco in the process of running through the World's Largest Oven and molten lava, but Saw, without a handle, is able to bring back the basket back to X with Dora.

In "Lick Your Way to Freedom", Saw complains to Four that everyone else on her team, except Dora, has died. Four says they'll recover one person, so Saw asks Four to recover Taco but is interrupted by Stapy.

With their team at a major disadvantage, at two members, Saw is hopeless, but she is oblivious to the fact that Dora can break open jawbreakers with her head. She does this, freeing Book.

finishes the challenge first as a result. She is seen again after this when Stapy throws Lollipop’s stick away towards her, she frowns at this.

In "Why Would You Do This on a Swingset", she first appears on her team's swingset. She is saddened by Taco's death (as at that time Taco is still trapped in a jawbreaker). Once Team Ice Cube! and

are left, Saw tells her exhausted team to push through, giving Taco the idea that would let her see the light of day. In addition to that, her team is spared from elimination again, but Saw is angry at Taco.

In "Fortunate Ben", Saw can be seen glaring possibly at Taco when they get on their team plane.

In "Four Goes Too Far", she tells her team to latch onto A Better Name Than That's rocket to escape the Twinkle. They take a trip to space, where Saw is amazed, as she hasn't been in space before. Unfortunately, when Book tells her to look at the Earth, Saw gets the Twinkle.

With five minutes left, ABNTT and

have a stare-off, where each member of each team pass the Twinkle onto one another. However, Taco's loyalty to her team causes Bell to get the Twinkle, meaning that the Twinkle wasn't on the Moon. However, the rocket breaks, stranding the two teams.

In "The Liar Ball You Don't Want", she, her team (minus Taco), and ABNTT are still stuck on the Moon. She is shocked after Taco gets squished by the Liar Ball. She later tells Tennis Ball to make Remote turn left. Robot Flower breaks the connection between Remote and herself, and

In "Questions Answered", she and everyone else make it back to earth after Donut forces the planet through TV's screen. She inhales 8-Ball's fumes when he is crushed by the moon and got eliminated. As a result, whenever she presses the buzzer to answer a question, she can only say the word "eight". She gets questions 3, 4 and 5 wrong because of this hindrance, before getting "What is the past tense of eat?" correct, since "ate" is a homophone of eight.

After episode eight, Saw is M.I.A. along with Clock, but she returns from her absence in "Return of the Rocket Ship", now with a new handle.

In "Return of the Rocket Ship", Saw is revealed to have returned and she starts the intro when greeting her team. She explains that she returned from a "SCENT CLEANSE" and has a new, pink handle (yet no one mentions or even acknowledges it). She says that the scent cleanse allegedly cured her of 8-Ball's fumes, although this later turns out to not fully be the case as she has the compulsion to scream "EIGHT" in words where it sounds like the number, causing Lollipop to question if the fumes are actually out of her system. Saw claims that they are. This doesn't satisfy Book as she constantly gets on Saw's case for "abandoning" them.

Later, she can be seen staring at a box of shovels, where Golf Ball's MMR shows that her thoughts are affected by her compulsion to scream 8 when thinking about words that contain similarities to the number 8, her eye twitching whenever she does so. As a result of Golf Ball's MMR sending a thought back, she gets a thought about Golf Ball's square root obsessions and blurts it out loudly.

Saw seems to be unaware that she is screaming 8 whenever a word sounding like the number comes up and believes that she is fully cured.

In "Don't Dig Straight Down", Saw can be seen being saved by Lollipop's fork repellent as it also repels lava. The episode ends however with Saw and most her teammates getting covered in lava when the can becomes empty.

In "The Four is Lava", it's revealed that Saw's team survived the lava and dug a hole underground. Because Saw is metal, she swims through the lava, with Dora shielding her handle with her mouth, to tell Four to save her team, although it's Dora who's able to tell Four to help. When all of

is present, they all greet Taco after ignoring for so long. Saw hugs her, leaving a heated blade shape on Taco's face. Cake at Stake then begins and Saw is the third contestant safe at only 1,255 votes.

ends up being the first team safe from elimination as they were already with Four in order to do Cake at Stake.

In "The Escape from Four", Saw walks with the other contestants to watch Four struggle at sucking up Spongy. Saw helps with pulling the eliminated contestants out of Four. She later quits BFB to compete in TPOT after seeing Two turn the sun into a spike ball to hit Four with. Later Saw can be seen smiling at Book as she allows Taco to go back to BFB.

In "X Marks the Spot", Saw cheered when Coiny claimed that X will now be able to keep hosting their show as long as the glue (which Lollipop switched with paint) keeps him in place. Saw gasps when the Four Colored Team ends up lassoing X away.

In "B.F.B. = Back From Beginning", Gelatin says that Saw told him about Dora breaking a jawbreaker with her head.

In "SOS (Save Our Show)", Saw has a brief appearance, along with Pin and Gaty, after Ruby suggested splitting BFB into two shows.

In "You Know Those Buttons Don't Do Anything, Right?", Saw misses Lollipop and Taco, but still has Gaty. They both join Barf Bag's team since they're all shaped like zigzags. When naming the team, the members get into an argument. Saw tries to calm them down by saying they're teammates, but shouts the EIGHT in "teammates", making the team's name Team8s. Saw is used by Donut to climb the building, and when Gaty still needs to get up, she tells Donut to hold her over the edge to magnetically attract Gaty's hinges. Using this strategy, Saw's team snags 3rd place in the challenge.

In "The Worst Day of Black Hole's Life", Saw is first shown smelling a flower, not paying much attention to the challenge. At one point, she follows her team because she thinks they are running away for no apparent reason, but they are actually running to get their stack back from Bell. Needle grabs onto Saw's handle, jumps on the stack, and uses Saw to sever their stack from Bell's string. Saw's team is safe with the tallest stack. 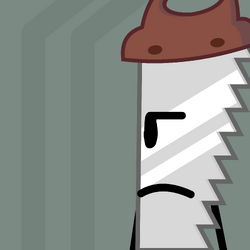