< Saw
View source
watch 02:56
Doctor Strange in The Multiverse o Madness - The Loop
Do you like this video?
Play Sound

This article is about everyone's interactions and relationships with Saw.

Saw usually acts as the complainer or worrying type to the other contestants as she often yells her lines. When she isn't distressed or in a panic she acts rather calm around her teammates, who she cares a lot for, and is always quick to encourage them in challenges.

In "Reveal Novum", Saw gets angry when the Announcer says that she didn't get enough votes to join and starts to saw him.

In "Getting Teardrop to Talk", Blocky used Saw to cut the pentagon in half. Saw did not seem to like this, as she told Blocky to put her down and yelled "help" while she was being used to saw the Pentagon.

Status: Enemies, on her side

In "Four Goes Too Far", Saw has a conversation with Book and Lollipop about space. Book makes Saw look at the Earth, causing her to get the twinkle, that then spreads to the rest of the team, and causes Taco to leave.

In "Questions Answered", Book comforts Saw after she says "eight" instead of "glue", telling her everybody's tongue slips up occasionally. Later in the episode when this happens again, she states that the fumes that she inhaled earlier could be getting to her after all.

In "Return of the Rocket Ship", when Book angerly demands an explanation on where Saw has been, Saw explains that she was a on a scent cleanse. When Book accuses Saw of abandoning her team, Saw says she didn't abandon them, she just got back "L8".

In "The Four is Lava", Saw appears to have mixed feelings about Book being brought back, while most of her team is disgusted about it.

In "The Escape from Four", Saw can be seen smiling at Book as she allows Taco to go back to BFB.

In "Questions Answered", when Saw gets her third question wrong due to the fumes she inhaled earlier, Donut attempts to punish her by screeching her with a recording of Four.

In "You Know Those Buttons Don't Do Anything, Right?", when Donut wonders how their team is going to get Gaty to the roof of the building, Saw tells him to hold her over the edge so she can attract Gaty's magnetic hinges.

In "Getting Teardrop to Talk", Saw and Dora are the only members of their team still alive at the end of the episode.

In "Lick Your Way to Freedom", Saw seems worried that she and Dora can't complete the challenge easily due to being the only two people on their team alive, but Dora easily does it alone and places them first.

In "The Four is Lava", when Saw says that she doesn't want to lose her new handle to the lava, Dora shields Saw's handle with her mouth, which Saw thanks her for. Saw also states that Dora won't be able to communicate to Four but is surprised when proven wrong.

In the intro of TPOT, Eraser uses her to saw a pentagon.

In "Getting Teardrop to Talk", she tells Liy not to squish Four because they don't know what "it" does. Later when Four asks if the eight teams are all set to go, Saw, Book, and Teardrop try to tell Four that they aren't because of their team name.

In "Lick Your Way to Freedom", Saw yells at Four demanding that her teammates be revived.

In "The Four is Lava", Saw desperately tries to tell Four to save her team, who are trapped in a hole in the ground by lava. Four does nothing in response due to Saw's panicking making it hard for her to explain in a way he could understand.

In "The Escape from Four", she switches to TPOT after seeing Two turn the Sun into a spike ball that hits Four

In "B.F.B. = Back From Beginning", Gelatin reveals that Saw apparently told him about how Dora was able to break a jawbreaker with her head.

In "The Liar Ball You Don't Want", Saw, Golf Ball, and Gaty look at earth through a telescope with the first two being surprised over Taco's death.

In "Return of the Rocket Ship", when Ice Cube says that she's going to switch teams, Saw gasps.

In "Getting Teardrop to Talk", Saw tells Liy not to squish Four cause she doesn't know what "it" does.

In "Getting Teardrop to Talk", after Gaty invites Saw to join her team, Saw joins and brings her friends Lollipop and Taco along.

In "Four Goes Too Far", when

latches on to Golf Ball's rocket, Saw is fascinated that they are in space. Lollipop questions Saw about never being in space and Saw confirms she's never been in space. Lollipop also calls her the nickname "Little grey zigzag" in this scene.

In "Return of the Rocket Ship", Lollipop tells Saw that it's good to have her back. When Saw explains where she's been, she says that she told Lollipop and Taco she would be gone. Later, when Lollipop makes a pun based on the judging a book by its cover idiom, Saw tells her she "h8s" that expression.

In "The Four is Lava", when Lollipop brings up how Dora is lavaproof and could get Four to save them, Saw says that Dora isn't good at communicating. Lollipop tells Saw to go get Four then, but Saw doesn't want to since she doesn't want to lose her new handle.

In "You Know Those Buttons Don't Do Anything, Right?", Saw tells Gaty that she misses Lollipop and Taco.

In "Lick Your Way to Freedom", when Saw is about to have Taco revived, Stapy interrupts her, asking why she gets to pick someone to bring back.

In "Getting Teardrop to Talk", when Saw joins Gaty's team, she also brings along her friends, which are Lollipop and Taco. While chasing X's basket in the desert, Saw asks if they really have to run through the desert, to which Taco responds, "That's where the basket's taking us!". They have two more similar interactions while running through the World's Largest Oven and while swimming through lava.

In "Why Would You Do This on a Swingset", Saw says that it's too bad that Taco isn't there to compete with them. Saw, along with Lollipop, begin to write eulogies about Taco and her "death", though Saw is never seen writing hers, she just mentions them at the ending. Later, when Taco returns, Saw along with the other

members (besides Dora, Gaty, and Teardrop) are mad at Taco, for what they assume was Taco's abandonment of their team (she was actually in a jawbreaker). Saw angrily states she'll keep her eulogies, because in her eyes, "they're still valid." This possibly starts a rivalry between Saw and Taco. However, they do seem to get along better than Taco does with the rest of her team.

This conflict is further shown in "Fortunate Ben", as Saw is seen glaring at Taco before their plane is launched.

In "Four Goes Too Far", Saw groans along with the rest of

when Book announces that Taco has "left" them again.

In "The Liar Ball You Don't Want", Saw gets worried that Taco died, although she seems to be worried because Taco was the only

In "Return of the Rocket Ship", Saw says that she told Lollipop and Taco she would be gone for a while on her scent cleanse.

In "The Four is Lava", Saw is really happy to see Taco again, saying that they missed her so much. She then hugs Taco but moves off when she realizes she's burnt her. Saw is shocked to see Taco wanting Book recovered.

In "The Escape from Four", Saw looks at Taco with a smile as she leaves to compete in BFB, likely being happy to see she and Book made amends.

In "You Know Those Buttons Don't Do Anything, Right?", Saw tells Gaty that she misses Lollipop and Taco. 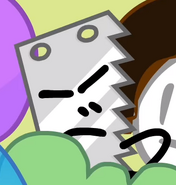 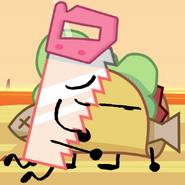 In "The Reveal", Saw saws Woody in her audition.

In "Getting Teardrop to Talk", she and Dora bring their basket to X.

In "X Marks the Spot", she cheers when X is dropped in "glue" so that he can continue as the host. She also gasps when the Four Colored Team steals him away with a lasso.

In "The Escape from Four", Saw helps with trying to pull the eliminated contestants from Four.

In "Why Would You Do This on a Swingset", when her team is too exhausted to continue swinging, Saw tells them to just push through and that they can do it. This works, and also encourages Taco to break out of her jawbreaker.

In "Four Goes Too Far", Saw gets her team to latch on to Golf Ball's rocket so they can avoid the twinkle. Later, Saw and the rest of

In "The Liar Ball You Don't Want", at one point when the Better Namers are using Robot Flower to control Remote, Saw tells them to make Remote go left.

In "You Know Those Buttons Don't Do Anything, Right?", when Pin, Needle, Coiny, and Gaty are arguing over the team name, Saw tries to calm them down, saying they shouldn’t fight because they’re teammates. The eight fumes end up causing her to accidentally emphasize on the "ate" in teammates and the team is named Team8s.