Schazer is a voice actor for Battle for Dream Island: The Power of Two. 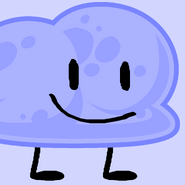