Battle for Dream Island Wiki
Register
Don't have an account?
Sign In
Advertisement
in: Characters with unknown genders, Recommended Characters, Characters,
and 4 more

Shopping Cart is a recommended character and was one of the eligible debuters for Battle for Dream Island: The Power of Two. They failed though, only receiving 2,501 votes, placing 6th.

Shopping Cart is very excitable and is shown to get giggly. They act a bit aloof while still being joyful. Shopping Cart tends to jump to conclusions really fast instead of thinking them out and can change their mood really fast. This is shown when Two calls their name, and Shopping Cart immediately believes that they are eliminated from the debut and becomes depressed. But, when Two says that they never said anything about that to try and cheer them up, Shopping Cart goes right back to being excited. They later find out that they were still going to be eliminated, and they go right back to being depressed.

They are a metal shopping cart with a blue label plate and handle. Their face is drawn with white. They have no legs, their wheels being a stand in for them.

In "Enter the Exit", they appear when David runs away from X.

In "Return of the Rocket Ship", they appear in every batch of recommended characters throughout the episode.

In "The Escape from Four", Shopping Cart was one of the 26 recommended characters selected by Two as one of the eligible candidates to become a contestant in The Power of Two. Shopping Cart's audition is them bouncing about happily, making rattling noises.

They cheer upon reaching the final eight to join with their fellow debuters. After Tape is sent away, Two motions to Shopping Cart. Shopping Cart sadly assumes they didn't get enough, prompting Two to respond that they never said that. Shopping Cart then asks if they won, to which Two isn't able to answer since they actually didn't. Two then claps, sending them falling through the floor. Shopping Cart can later be seen excitedly watching PDA as they try to unlock one of the hotel doors with their stylus. 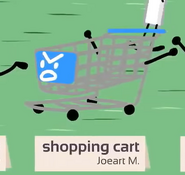 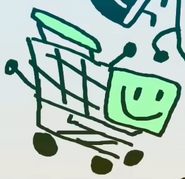 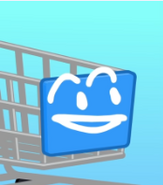 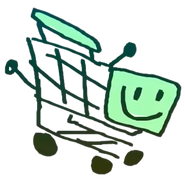