It appears in later episodes of Battle for Dream Island and in Battle for BFDI.

In "Sweet Tooth", Needle's cake somehow grew to the size of a planet, making Earth a triple planet system, and eventually becoming bigger than Earth. After it became bigger than earth, it creates a windstorm. However, it was popped by Needle in Bridge Crossing, after Leafy slapped her. During this event, various glimpses of space can be seen.

In "Rescission", space is mentioned in Announcer's diary, which reveals that he came from an alien planet in space.The contestants are flung into space (due to budget cuts) at the beginning of Gardening Hero, and the remainder of the episode takes place there. They return to Earth in the next episode.

In "The Long-lost Yoyle City", Yoyle Mountain's real summit is so tall that it actually reaches space. This is the only time space ever appeared in BFDIA.

In "Gardening Hero", "Yeah, Who? I Wanna Know!", and "Getting Teardrop to Talk", Black Hole is shown have lived in space instead of on Earth because of how big he was. However, he was crushed down to a smaller size and he now lives in Goiky with the other contestants.

In "Getting Teardrop to Talk", Pillow theorizes that when one does the "fluttery arms" gesture, it means that the last of their "care spirit" is sucked out of their fingers and into Space. However, this isn't true.

In "Four Goes Too Far", teams

and ABNTT go to space to try to get away from The Twinkle, but Saw catches it and brings it to space with them. The Twinkle is returned to earth when Taco tells Bell to look at the Moon, and Bell catches The Twinkle.

In "The Liar Ball You Don't Want",

and ABNTT were still in space on the Moon. They were trying to have a plan to have Robot Flower control Remote but later failed because of the bomb. Later on, the Liar Ball which contains Loser was sent to space most likely because of Remote’s explosion.

In "Questions Answered", Donut uses his special camera to bring the Earth to the Moon to return

and ABNTT to Earth, so Cake at Stake could happen.

In "Don't Dig Straight Down", Spongy escapes the lava by going to space in his "private jet", meeting up with Four (along with Death P.A.C.T. by being inside of Four), Puffball and Woody.

In "How Loe Can You Grow?", the teams are going to the sun, but the Have Nots and Spongy's private jet got burned by it.

In "A Taste of Space", the Have Cots are floating through space in their cardboard spaceship. Gelatin breaks a window to see what space tastes like, describing it as otherworldly. This leads to the team (except for Teardrop) beginning to suffocate, so Four gives them air as Cake at Stake prizes. Eventually, the team lands on the Sun, and outer space serves as the background for all of their scenes.

In "The Hidden Contestant", Lollipop and Flower travel to the sun to retrieve the cardboard spaceship.

In "Chapter Complete", Four flies to the sun along with X and 7 contestants. Gelatin then convinces Four to come back to Earth using the BFDI, so Four snaps themself and everyone else back to Earth. 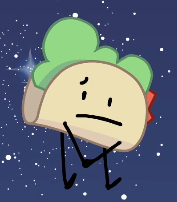