Battle for Dream Island Wiki
Register
Don't have an account?
Sign In
Advertisement
in: Stubs, Articles proposed for merging, Items,
and 4 more

Spike Balls are objects that appeared in two episodes of Battle for Dream Island, one being episode 23 and the other being episode 25. It also appears as a cameo in the fourth season. The spike balls are used as projectiles, being taken advantage of by the Spike Ball Speaker Box and Rocky.

The Spike Ball in BFDI is sharp black, with a little bit of shine around the top left corner. The shine looks like a bent line.

The Spike Ball cameo in BFB is a grayish shade with the shine on the corner. The shine is thicker than it was in BFDI.

Spike Ball as it appears in Cloudy's collection. 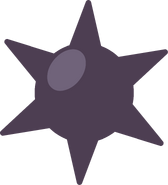 Spike Ball as it appears in Season 4. 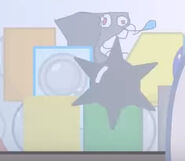 spongy getting hit by a Spike Ball
Items
Community content is available under CC-BY-SA unless otherwise noted.
Advertisement