The Springy Shoes are an item in BFDI. It is a pair of open-toed shoes with springs on its soles. It comes in blue and red variants.

The springy shoes were a gift that Leafy gave to both Bubble and Ice Cube in "The Reveal". When Leafy gave Bubble a pair of Springy Shoes, Pencil got mad at Leafy for not giving her some, so Leafy took them from Bubble and gave them to Pencil. Bubble got angry and wanted them back. Pencil later became stuck in the ground upside-down, and Ice Cube got stuck in Pencil while she was upturned. Bubble took advantage of the situation by stealing Pencil and Ice Cube's Springy shoes, and she started bouncing on top of them.

In "Reveal Novum", the shoes were making it harder for Bubble to stare during the competition, so she threw them away to Leafy's shock and anger. She becomes resentful towards Bubble because of this in later episodes.

Later, as the TLC was rolling down the hill, the TLC landed on the shoes, causing it to inconveniently springboard on the shoes, which resulted in the TLC jumping over the trees that would have blocked its fall. The TLC then fell into the ocean.

The springy shoes haven't been seen since then.

Bubble being given the springy shoes by Leafy

Bubble bouncing on the springy shoes 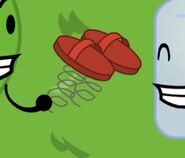 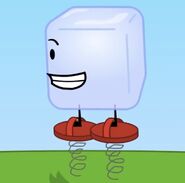 Bubble using four of them

Bubble throwing them away

The shoes after Bubble throws them away
Items
Community content is available under CC-BY-SA unless otherwise noted.
Advertisement