Battle for Dream Island Wiki
Register
Don't have an account?
Sign In
Advertisement
in: Characters, Males, Voiced by Sam Lee,
and 7 more
English

View source
watch 02:12
Who is Stapy?
Do you like this video?
Play Sound

BFB: "This Episode Is About Basketball"

Stapy is a male contestant in Battle for BFDI, who first appeared in "BFDI APPISIOTE 225555555!!!!!". According to him, he is one of the heaviest contestants in BFB. His first appearance (in BFB) is with Marker when he was about to play "Toss the Dirt" with him. Stapy competed on Free Food. In "This Episode Is About Basketball", Stapy was eliminated with 9,028 votes. Like the other EXITors, Stapy also appears on Battle for Dream Island: The Power of Two.

Stapy is one of the two BFDI contestants with arms and no legs (with the other being Lightning). Stapy must leap to move because he is heavy and lacks legs. Usually, when Stapy leaps to move, he produces a flattened staple.

His staples are dispensed when Stapy's top half presses onto anything, including himself. They were used on a jawbreaker, Lollipop, Free Food's paper airplane, and in the canyon shown in "Fortunate Ben".

Stapy is a pinkish-red stapler with a light grey pusher.

Stapy is typically a calm and friendly contestant. He can get angry; however, this is usually caused by his best friend, Foldy, getting harmed by someone. He prefers to sit back in challenges, but if he is asked to help with a challenge or he sees an opportunity to help, he will try to take it. He also has a tendency to sass others, as shown when he is talking to Fries in "Questions Answered" and when he is teasing Liy in "Get to the Top in 500 Steps".

However, Stapy does appear to have something known as "stapler instincts" where he will enter a trance and attempt to staple to closest thing in sight. It appears Stapy is aware of this, and sometimes even uses it as an excuse.

Stapy never runs out of staples, which is good, because after all, he is a stapler. Foldy and Stapy are such good friends that Foldy risked her own team's victory to avenge Stapy.

Stapy is very curious and loves to play games, especially Rock-Paper-Scissors with Foldy. However, their variation of Rock-Paper-Scissors states that the person who farts silently the most wins the game. To describe why he failed a task, he'll blame his "stapler instincts", whatever those are.

Did You Know?: Stapy does not like to be called "Staply", but he doesn't think correcting people is worth his time.

Stapy's first speaking appearance is in "Getting Teardrop to Talk", where he plays Toss the Dirt with Marker. During team choosing, Yellow Face persuades Foldy, Stapy's friend, to join Free Food. Stapy and Marker both follow her. During the challenge, Stapy plays Rock Paper Scissors when Fries interrupts, questioning if they are seriously playing around in the middle of a contest. Stapy decides that he'd like to help, so Fries asks Stapy if he's the lightweight; he is the one of the heaviest contestants. Foldy being one of the lightest, is used by Fries to get the basket. However, Foldy is shredded by the basket's propeller, enraging Stapy.

In "Lick Your Way to Freedom", Stapy asks Four to recover Foldy and proceeds to angrily shout at him with the other Free Food contestants. Four says that he will only recover one person. Stapy interrupts Saw from asking to revive Taco, but Grassy cuts him off and recovers Tennis Ball. During the challenge, he smashes open a jawbreaker and frees Lollipop, making Free Food safe. He and Marker are disappointed that they didn't save Foldy and "punish" her by killing her. Later, Stapy is happy to see Foldy come back and notices that she looks angry. She says she saw Liy, making Stapy mutter in disgust.

In "Why Would You Do This on a Swingset", Stapy is only briefly shown getting on his team swing.

In "Today's Very Special Episode", Stapy is seen playing Rock Paper Scissors with Foldy after the intro. Marker asks to join them, despite not knowing how to play, which Stapy proclaims as lame. After Foldy explains, Marker plays Four, which frightens Stapy and Foldy. In the challenge, he is a part of "The Year's Hottest Look".

In "Fortunate Ben", Liy is eliminated, making Foldy and Stapy happy. Later, he is concerned about the planes being made out of paper, being unsure if they could support his weight. After Beep falls, Free Food's plane starts spinning out of control, and Stapy staples the plane together and traps his team inside, saying that his "stapler instincts" took over. It's a free-fall between Beep and Free Food. Marker suggests slowing the plane down, which makes Stapy spit lots of staples onto the ground, causing the entire landscape to split in half. This unintended "sabotage" made Beep lose.

In "Four Goes Too Far", he throws a fork at Four for killing Foldy, who zaps him. He is the first one out of Free Food to get the Twinkle. Later on, Bell contracts it, and after smashing through The Losers' basket, Free Food evades elimination again.

In "The Liar Ball You Don't Want", Stapy can be seen bouncing on a popper, leaving the Cake at Stake area, and popping Balloony in the contest.

In "Questions Answered", he engineers an iance buzzer with Puffball's tape and a popper. This disallows him to answer any questions, effectively skipping questions 1 to 6. He is annoyed at Donut helping Barf Bag to make TIC safe, commenting that it is "bias". Stapy answers "winter" to "What is [Donut's] favorite season?" and gets it wrong. Meanwhile, Puffball pushes the buzzer towards Bubble, who presses it thinking it is an actual buzzer. Now that Stapy has overheard Bubble's answer - Summer - he buzzes in and gets it correct. However, Match shows "the footage" to Donut, effectively disqualifying Free Food.

In "This Episode Is About Basketball", Stapy passes when Marker asks if he wants to play Eat the Dirt. In Cake at Stake, Stapy is eliminated and hops away after telling Puffball to save two cakes meant for Foldy and Bell, for they were dead.

In "Enter the Exit", Stapy makes a post-elimination appearance, having tea with Pillow. X tells David that Stapy is a good example of an eliminated contestant, and Stapy becomes nervous. Clock names Stapy as an eliminated contestant, enraging him as he was about to go see a revived Foldy, and because he wanted to watch the competition. However, Four sucks him into Four's insides: a blue, barren void. After Roboty is put in, 8-Ball points out the door to what is shown as "EXIT". Stapy hops to the door and reaches for the door handle, nervous, which also starts the intro. Shortly after EXIT, Pencil mentions that Four isn't in the class, Stapy opens the door. Pencil is disgusted at the sight of male objects, while Leafy welcomes them in. He realizes that Four is present all of the time. After Four made an announcement about rejoining, Pencil said she was dying to get out of the class, which was followed up by him and 8-Ball. His rejoin audition was him telling the viewers that his "stapler instincts" made his team lose.

In "Get to the Top in 500 Steps", Stapy chastises Liy's supposed cowardliness for not opening the locked door in EXIT, but this only prompts Liy to smack Stapy on his head for being dense. Despite this, Stapy continues and attempts to provoke Liy once more, rubbing in the fact that Liy will forever be taunted by the locked door. Once again, Liy smacks Stapy on his head, but this time she uses the resulting staple as a lock pick, before being interrupted by Four. Stapy received only 1,701 votes to rejoin, the 4th least out of the entire voting pool, only beating out Roboty, 8-Ball, and David.

In "The Escape from Four", Stapy can first be seen admiring Loser with some of the other Exitors. After hearing Liy's idea to escape the EXIT, he begins stacking items to Four's mouth. After building to high, he has a hard time keeping his balance due to being to large and moves so Loser can take his spot. He escapes through Spongy's holes, but stops to tell Firey Jr. that he probably shouldn't enter Spongy since he is flammable. Stapy reaches the surface, calling Foldy to help him, but ends up getting sucked back into the EXIT. As he falls back down, he gives Firey Jr. permission to leave through Spongy's body.

In "Chapter Complete", Stapy appears at the beginning of the episode when he shows Match how he can change a staple into a four. After being questioned by Match what the staple is supposed to be, Stapy answers by stating that it is his favorite host, Four. Later, when Profily is tapping on Four to wake up, Stapy asks what's happening. Stapy questions Four by asking them if they've tried waking up. After everyone is revealed to be figments of Four's imagination, Stapy chimes in by arguing with the fact that Four has guilt-tripped them, along with over-possessiveness. Then, Four snaps and Stapy, along with the other imaginary EXITors, disappears.

In "You Know Those Buttons Don't Do Anything, Right?", after their escape attempt fails, Liy tells Stapy it's time for plan B. Stapy then knocks down the tower of items they stacked up. They place the EXIT sign back up and Stapy grabs a hammer for Liy to use to pull the boards off the door at the back of the classroom. Liy then uses one of Stapy's staples to unlock the door. 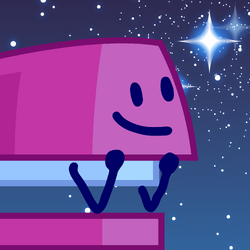