"Are You Smarter Than a Snowball?" (as an asset)

"Half a Loaf Is Better Than None" (as a recommended character)

TV is a male contestant on Battle for BFDI and The Power of Two, and one of the 30 recommended characters that could have been voted into the competition in "The Reveal". He only got 13 votes, placing him 7th in the voting and not entering the game.

In BFDIA, he only received 287 votes to join placing him 24th (21st after the contestants who weren't present were disqualified) which was extremely close but was not enough to join. However, he ended up being the host for a few episodes because Firey said he was the closest to the Announcer. He became a co-host in "Insectophobe's Nightmare 3", when Puffball Speaker Box became the host.

He had another chance at joining the game in IDFB along with the other TLC prisoners until it was postponed. He got 318 votes.[1]

In BFB, TV finally got to compete and was on team A Better Name Than That, but quit in order to compete on TPOT.

TV appears to be a flat-screen plasma (also widescreen) television. He has the ability to hide his feet and rest on the ground from the stand. He also can project images and videos on his display instead of his normal face.

While TV rarely speaks, he uses pictures and words to show how he's feeling and when he is talking to contestants. TV himself is often used by the other contestants to display information, stats, and Cake at Stake results.

In BFDI, TV dreams to win Dream Island. However, after realizing he only got 13 votes, which isn't enough to join, he shows an Announcer being crushed on his screen, indicating that TV is angry at him. Afterward, he is sent to the LOL.

In BFDIA, TV expresses major excitement when he becomes the host. In later episodes, he can be random and talks about things that just happened using words.

In BFB, TV is again mostly silent, though displays his emotions and feelings through visual aid on his screen. While TV has been rude before, such as when he told Robot Flower not to talk, he also sided with Robot Flower when she closed the signal in "The Liar Ball You Don't Want". TV, despite being mostly silent, is expressive and emotional, and maybe also snarky and has a sense of humor, as his voting icon is him displaying the word "don't", so that his voting message would be read as "don't type [E] to eliminate TV".

Starting in "Return of the Rocket Ship", he uses clips from previous episodes of BFDI-BFB to articulate full phrases instead of speaking.

TV is a flat-screen who rarely speaks. He uses videos to communicate his thoughts, memories, and provide teammates with information. In fact, TV is so good at providing information that he served as the host for a short time in BFDIA!

While televisions will often dominate a room, TV is happy staying in the background and doing what he thinks needs to be done. When someone needs him to display information, TV is happy to oblige.

Did You Know?: TV has had a long history of counting votes, so he's learned how to estimate votes with a 100-vote margin of error.

TV is one of the 30 recommended characters eligible to join BFDI in episode 18. He plays a scene in which he wins BFDI, but then Announcer tells him he has 13 votes, which isn't enough to join. He then plays a scene where the Announcer is crushed before being flung to the LOL.

TV only gets 287 votes, which ends up being 1 position short of the competition in BFDIA. However, Firey decides that TV should be the host.

In "Get Digging", he plays two Cake at Stake songs, both of which are hated by Gelatin and Fries. At Cake at Stake, TV reveals that Coiny won the prize and Donut is eliminated. TV ends up choosing W.O.A.H. Bunch as the winning team.

In "Insectophobe's Nightmare 3", he plays another Cake at Stake song which Fries calls a bit of an improvement from his last attempt. He co-hosts with Puffball Speaker Box after Puffball receives her as a prize, and Dora is eliminated.

In "Zeeky Boogy Doog", TV reveals that Teardrop got the most likes and dislikes, though when he displays the latter he emits a loud dinging noise that irritates everyone.

In "Get in the Van", TV acts a lot more interactive. With Puffball Speaker Box killed, TV now co-hosts with Firey Speaker Box. During Cake at Stake, he displays some images of Donut as Firey Speaker Box explains that his corpse is being used as the cake. He reveals that Puffball won the prize again and Match is eliminated. This would mark his last appearance in BFDIA.

TV is somehow in the Tiny Loser Chamber despite hosting for the previous season. He is given a chance to join the show. Had the season continued, he wouldn't have had enough votes to join.

In "Getting Teardrop to Talk", TV is initially seen cheering on Loser, displaying text saying "I Loser", with a rotating Loser after the word "I". Later on, when the teams are forming, Golf Ball chooses TV and Robot Flower to join A Better Name Than That, reasoning that if their team has two mechanical minds, then they will outmatch the other teams. In response, TV displays a real-life time-lapse of a flower blooming. When A Better Name Than That is named, TV displays the team's logo on his screen. During the challenge, TV is assigned the task of relaying coordinates of the position of the basket. He also flings 8-Ball and Basketball with the trebuchet to weigh the baskets down.

In "Lick Your Way to Freedom", TV simultaneously shows two clips from the previous episode of Blocky killing Tennis Ball and Golf Ball. He is also part of the crowd yelling at Four to revive contestants, though his back was turned to the camera, obstructing his face. He does not actively participate in the challenge. He reappears in the stinger, where he can be partially seen in the group of contestants running around while Taco is stuck inside a jawbreaker.

In "Why Would You Do This on a Swingset", TV is first seen during the challenge, where he, along with the rest of A Better Name Than That, follows 8-Ball's orders and ignores Golf Ball's. He also turns purple alongside Robot Flower when 8-Ball tells them to.

In "Today's Very Special Episode", TV displays the timer of ABNTT wasting time. He also shows his ability to retract his legs into his body, explaining the assumed inconsistency of his design in earlier episodes. TV, along with the rest of his team, reprimands Golf Ball for disobeying 8-Ball's orders, calling her actions "treason". TV also interrupts and scolds Robot Flower for talking, saying that she is a machine. Ironically, this was the first time TV spoke, excluding his Cake at Stake jingles in BFDIA.

In "Fortunate Ben", TV is first seen boarding his team plane, sporting a big smile. While in flight, TV showcases his alarm at the plane's lack of control by displaying an exclamation point.

In "Four Goes Too Far", TV rides in a sled with the rest of A Better Name Than That in an effort to finally get rid of Four. After their victory, TV flashes the word "EPIC" on his screen. During the challenge, TV boards the top floor of Golf Ball's Rocket in an attempt to escape the Twinkle of Contagion. While on the Moon, TV calculates that the odds of the Twinkle returning to Earth at 0.0017%. Once Saw announces that the Twinkle has left the Moon, TV shows his joy by showing a picture of a man in a suit giving a thumbs-up. However, when Golf Ball's Rocket breaks, he shows that image upside-down, giving the appearance of the man giving a thumbs-down. In the stinger, TV is shown displaying a light-blue, reflective screen.

In "The Liar Ball You Don't Want", TV is shown still stranded on the Moon, along with the rest of A Better Name Than That and a Taco-less

. During Robot Flower's control of Remote, TV displays a live-feed of the challenge back on Earth. When Basketball inquires TV about whether he knew about Robot Flower closing the connection, TV responds that he sides with Robot Flower, saying that "mechanical minds stick together".

In "Questions Answered", TV shows Donut through the screen for Cake at Stake. After Donut announces this, TV shows a checkmark and plays a triumphant sound. Golf Ball then tells him (while he's offscreen) not to "fudge" the results, to which TV plays a less triumphant sound and also shows something red, possibly a cross. After getting angry at Lollipop laughing, Donut shuts her mouth with his hands coming out of TV's screen. When asked how he is able to do this, Donut says it's due to the camera being to transmit matter, and when asked to take them back to Earth that way, he says it can only send things one way. Eventually, Donut sends the entire Earth through the camera and out of TV. After getting back onto Earth, Cake at Stake continues, and the members of A Better Name Than That are all far away from Donut. He says they don't have to sit so far, which is followed by them all going inside his hole. TV is safe with 2,578 votes.

In "What Do You Think of Roleplay?", TV is shown displaying a chart of whose minds are swapped into which body. He also shows a flashback of Lightning flying around erratically, which leads to Fanny discovering that he is the impostor.

In "Return of the Rocket Ship", TV begins to talk using words previously said by characters from earlier seasons to form sentences rather than text to speech. After Tennis Ball discovers the coordinates for X's emeralds, TV tells his team that they must keep the coordinates a secret so they have an advantage over the other teams, only for Grassy to yell them out anyway. Later, when Basketball tells Grassy she doesn't understand why Golf Ball won't trust her, TV reminds her that she was the impostor in the previous episode. TV sits blank-faced after his team finds where to dig, and is last seen smiling in Golf Ball's rocket.

In "Don't Dig Straight Down", TV continues to talk using words previously said by characters from earlier seasons. When his team finds the emerald, he suggests bringing the emerald back to Four, which is accepted by Golf Ball. TV then wall-jumps with the rest of his team.

In "The Four is Lava", TV is recovered.

In "The Escape from Four", TV is seen joining TPOT. He later replies to Two when he asks if Four and his contestants are gone. 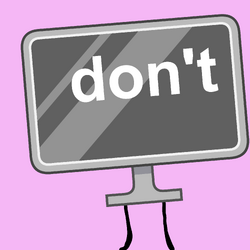