Taco is a female object contestant on Battle for BFDI. She was one of the 30 recommended characters that could've joined Battle For Dream Island in "Reveal Novum". However, Taco only received 9 votes, along with Marker and Dora. She placed 11th/10th place and was sent to the Locker of Losers. Taco was also up for voting for Battle for Dream Island Again, but only got 159 votes and once again failed to join.

Taco first appeared in "Vomitaco" along with Barf Bag as a different version and was a representative for the taco making contest.

She had a chance to join IDFB along with the other TLC prisoners, but she only got 288 votes.[1]

Taco appears to be a taco with a shell, lettuce, tomatoes, and a fish. Her design has changed between BFDIA and IDFB; in BFDI and BFDIA, Taco had a hard tortilla that was a darker shade of yellow. Her fish was placed on the top, and she always appeared with check-it eyebrows.

In IDFB, Taco has a soft tortilla that is beige. Taco's ingredients are also more visible, more notably with the lettuce on the top. Starting in the end of  "Lick Your Way to Freedom", she no longer has a fish inside of her because she ate it while she was trapped inside of the Jawbreaker, although she got it back after being recovered in "Enter The Exit". She also takes the form of Spongy's taco from "Vomitaco". In, The Four is Lava, she gets burnt by the lava, technically making her a hard shell taco, she was also burnt by Saw in said episode.

Taco has multiple sides to her character. She is sometimes portrayed as stubborn, foolhardy, and reckless, as she will by any means do whatever it takes to win regardless of how her actions will affect others. This can be seen in "Getting Teardrop to Talk" (her entire team), "Four Goes Too Far" (Bell), and "What Do You Think of Roleplay?" (Bottle). Taco can also be resourceful, clever, and independent, as she is often seen leading her team or taking matters into her own hands instead. She can also be prideful, shown when Lollipop read eulogies she had prepared for Taco, which praised her as being bold and courageous.

Taco also seems to have a much more sensitive and caring side at times. In "Why Would You Do This on a Swingset", when Bleh thinks that she abandoned them, Taco shows genuine hurt and gets emotional. In BFB 10's stinger, she apologized to Bell, showing her caring side. In "Four Goes Too Far", even when her team is mad at her, she shows a great amount of loyalty, transferring the Twinkle to Bell, preventing her team from getting UFE.

Overall, Taco is headstrong and crafty, yet foolhardy and prideful.

What's your favorite type of Taco? Fish? Beef? Chicken? If you're a lover of fish, then Taco is the girl for you. She's a soft shell stuffed with fish, lettuce, and tomatoes.

Taco naturally acts as a leader, but this doesn't mean she's a good one. She wants her problems resolved quickly, so she often looks for hasty solutions. This leads her expecting too much from the people she leads.

Taco's first major — and speaking — role is in "Getting Teardrop to Talk", where she is initially seen lounging around with Firey, Coiny, and Snowball. She is able to throw Pin's blueberry seeds into one of Cloudy's pots. Later on, she is angered by Four's murder of Pin. Taco joins

, along with Saw and Lollipop. During the challenge, Taco leads the rest of her team in chasing down one of X's baskets. This brings them into the desert, the world's largest oven, and molten lava. She pushes her team through it all, even when some teammates started to die. Taco is not present when Saw brings X the basket, and it is later revealed that she died, presumably in the lava.

In "Lick Your Way to Freedom", Taco is absent during most of the episode, being trapped inside a jawbreaker. Taco was not freed from her candy cage because David stopped licking the jawbreaker she was in. She's seemingly stuck in the jawbreaker for many days, and she tries to escape on her own, as none of her teammates notice her.

In "Why Would You Do This on a Swingset", Four didn't bother to release Taco, so she is still trapped inside the jawbreaker, but she is also on her team's swing. She constantly tries to communicate with her fellow team members, but they are unable to hear her (due to the fact that sound can come into a jawbreaker, but it can't come out), leading to some of them thinking that she's dead, and some of them thinking that she abandoned them. Taco listens into a conversation between Book and Ice Cube relating to her, and when Book says Taco had abandoned them, Taco herself breaks into sadness. Towards the end of the challenge, Taco finally breaks free from the jawbreaker, but her sudden appearance aggravates her teammates who believe that Taco left them on purpose.

In "Four Goes Too Far", she is first seen in the heart scene. She gets the Twinkle, but passes it on. She is later seen latching onto ABNTT's rocket. In space, she gets the Twinkle once again. She jumps off the chain of contestants, prompting a negative response from her teammates. She is later seen landing onto the surface of the Earth, and walks back to where the other contestants are. She meets Bell, and tries to get her to look at the moon, which works. As neither Taco nor her team had the Twinkle after the timer ended, her team is safe, but the rest of her team is still stuck with ABNTT on the Moon, as the rocket had broken earlier.

In "The Liar Ball You Don't Want", Taco somehow has the Twinkle again. When Donut is asked about where Loser is, he lifts and throws the jawbreaker Loser is put into, landing on and killing Taco. Her team sees a flattened Taco from the moon.

Taco doesn't appear in "Questions Answered" and "This Episode Is About Basketball", being dead.

In "Enter the Exit", Taco gets recovered by a recovered Four (which also means she gets her fish back). She doesn't say anything until the episode's stinger, where she tries to apologize to Bell. However, Bell is annoyed at how Taco used her previously. Interestingly, Bell asks her if she knows that "sorry" doesn't always cut it, to which she replies with "You'd think I would know that by now," possibly referring to how her team wouldn't accept her after BFB 3. Lollipop watches this.

In "Get to the Top in 500 Steps", while Taco herself isn't seen, Book mentions that they won't be choosing Taco to run in the challenge, but Lollipop says that she should talk to her instead of talking about her.

In "What Do You Think of Roleplay?", Taco mimics Tree, while Pin mimics Taco. As Tree, Taco asks Death P.A.C.T. to help them get unstuck. While Pie says that being "slow and steady" is the only way, Taco made her way out of Bottle by smashing and killing her. This murder clued Pie into correctly accusing the mock Tree of being an impostor. Once

uncovered Pin, Book became livid over discovering that Taco had "abandoned" them once more.

In "Return of the Rocket Ship", Taco calls Barf Bag to hang out with her, interrupting her paper plane sailing session with Spongy. When Barf Bag says she is busy and asks her to talk with her other friends in

, she tells her not to talk about her team. When Barf Bag tells her she should start caring what they think of her, Taco covers her ears and walks away, not listening to Barf Bag's advice.

For the remainder of the episode, she just sits doing nothing as she does not want to interact with her team at the time.

In "Don't Dig Straight Down", Book pushes Ice Cube and Taco away from the lava. Taco lands on a rooftop and is confused as to why Book saved her.

In "The Four is Lava", Taco wonders what she is going to say to Book after she saved her. After Four brings her to Cake at Stake, she is greeted by her teammates. Saw gives her a hug and burns her. Gaty then apologizes to her about the jawbreaker incident, which to that she smiles at. Taco then asks Four to bring back Book, much to everyone's shock. She tries to apologize to her, but Four interrupts her before she can even say anything. Taco is declared safe with only 1,387 votes, and Four gives her the thought of Book saving her, which she claims is not very happy and says she 'doesn't know how to feel about that yet'. Later in the episode, she tries to apologize to Book again, but Four again interrupts her.

In "The Escape from Four", Taco is extremely enthusiastic at the thought of gaining Two's powers, but is convinced not to compete for them on TPOT when Four offers A BFB as the new prize of BFB. Taco is reluctant to switch to BFB for fear of being accused of abandoning her team again, but Book assures her that she is not going to force her to stay with them and says that she can tell the team all about her experiences when they meet again. Taco stays on BFB, and is one of fourteen contestants to do so. She, along with her thirteen opponents and Four, is transported to a new location by Two to compete.

Here is a list of everything it takes to make Taco: 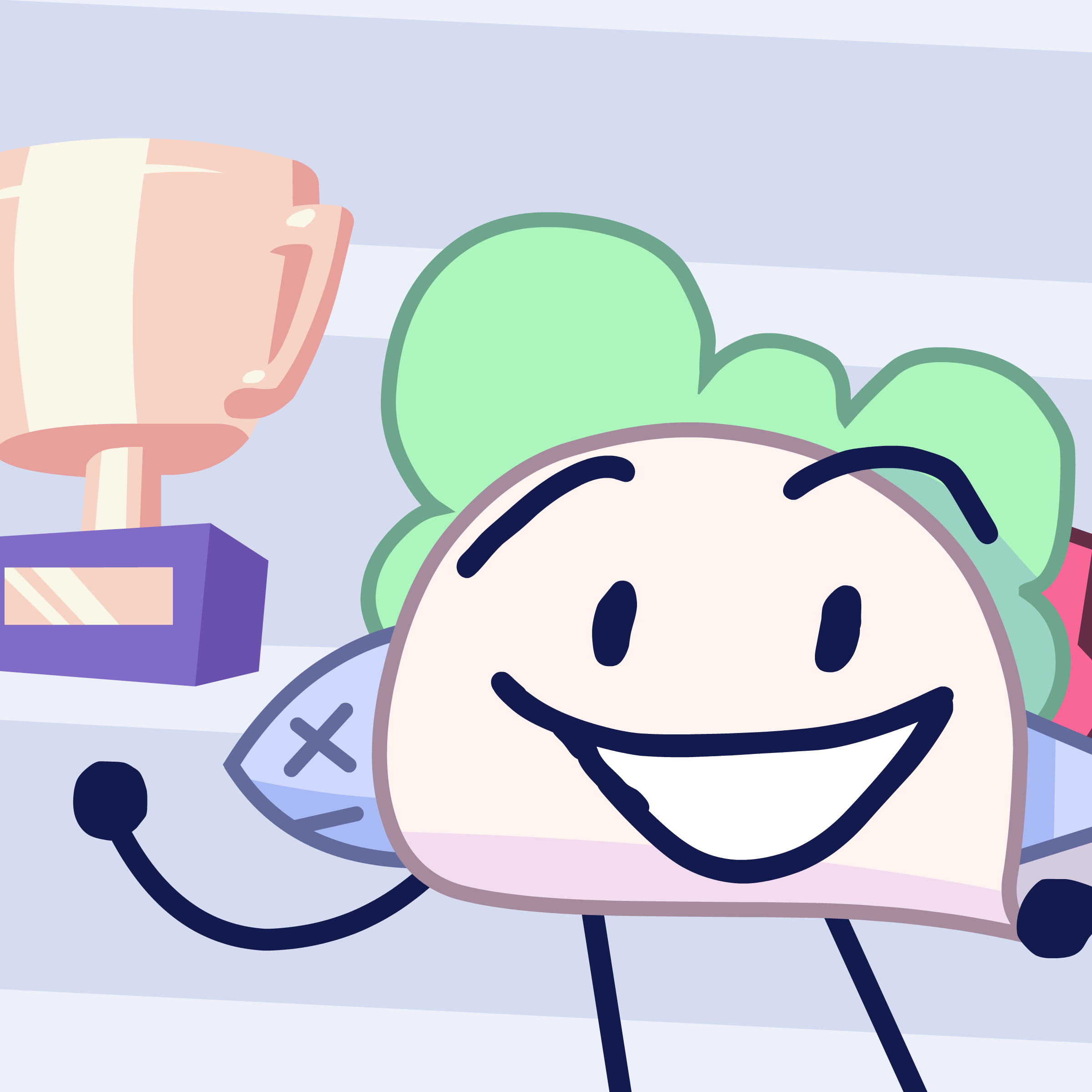