For the contestant, see Taco.

Tacos are a type of food in BFDI that were involved in the episode "Vomitaco".

In "Vomitaco" (as the title implies), the contestants could choose between either a barf bag surviving contest or a taco making contest. Firey, Pen, Leafy, Spongy, and Tennis Ball choose the taco contest. The contest was simply to make a taco, which would be fed to the contestants who were inside the TLC at the time. They would receive 10 points for every person who liked their taco.

Spongy and Tennis Ball both finish their tacos rather quickly, despite not having arms.

Firey accidentally burns his taco, so he has to restart. He eventually makes another one, though it is still slightly burnt.

Leafy makes a taco that is big enough to share, in case anyone is having trouble making one themselves and wants a piece of hers (which references her cake in "Sweet Tooth").

Pen asks for part of Leafy's taco, gloating about him not having to make one himself. This makes Leafy increase the price of Pen's piece to 200 vigintillion dollars. However, Pen actually pays for it with the Box of Paper Slips.

Tennis Ball gets 50 points, though he expected more since the people inside the TLC had only been fed bread for the past 13 months.

Spongy gets 80 points, with the Announcer saying that he is surprised at this result, since Spongy used his feet to make the taco.

Leafy gets 60 points, which she seems fine with.

Pen only gets 30 points, because the people in the TLC could tell he bought half of Leafy's taco.

Firey gets 70 points with his burnt taco. He assumed that they liked slightly burned food that's "all crispy and everything". 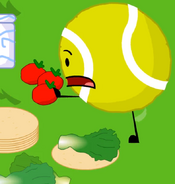 Tennis Ball getting ingredients for his taco 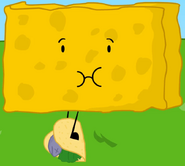 Leafy next to her giant taco 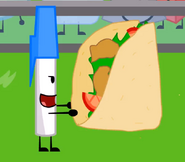 Pen claiming Leafy's taco as his

Tennis Ball and Spongy turning in their tacos