Tabitha "Taft" Bailey Marz (born January 10th, 2003) is a voice actor for Battle for Dream Island: The Power of Two. He was first credited in "You Know Those Buttons Don't Do Anything, Right?". He is the voice of 9-Ball. 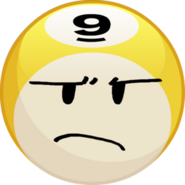