Battle for Dream Island Wiki
Register
Don't have an account?
Sign In
Advertisement
in: Characters with unknown genders, Recommended Characters, Characters,
and 5 more

Tape is one of the recommended characters in TPOT. They failed to join though, only receiving 2,271 votes, placing 7th.

Tape is a quick thinker, and can get cocky very quickly but meeken when confronted, as they use their tape quickly before Two drops them. Tape is also a bit goofy, as shown by them making a sticky pun because they used their tape. They are also pretty easy going, as they are shown smiling inside the hotel despite them not debuting.

They are a transparent, emerald green plastic tape dispenser with a roll of tape inside. They have no arms.

In "Insectophobe's Nightmare 3", Tape is the 19th recommended character out of the 25 shown at the end.

In "Lick Your Way to Freedom", Tape appears as Donut flies over the recommended characters.

In "Return of the Rocket Ship", Tape appears as Fanny flies over the recommended characters.

In "The Escape from Four", Tape was one of the 26 recommended characters selected by Two as one of the eligible candidates to become a contestant in The Power of Two. Tape's audition is them suspending themselves using the tape inside of their tape dispenser.

When Two announces that Tape didn't get enough to join, they refer to them as "Tapy" which Foldy misheard as Stapy. Just as Two is about to send them falling through the floor, Tape suspends some of their tape on the roof, making it so they don't fall. They brag that Two is stuck with them, but Two grabs the tape and with a few flicks, makes Tape fall. Tape can later be seen happily sitting inside the hotel as Two and the contestants use the elevator. 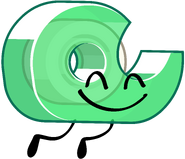 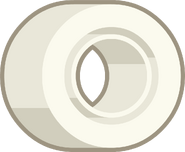 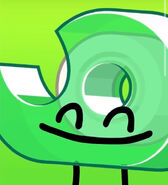 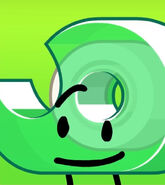