At the beginning of each season of the Battle for Dream Island series, the contestants form teams. The challenges in each episode pits teams against each other. Later on the season, teams break down, forcing each contestant to compete individually.

The teams in the Total Firey Island comics are Murderer Trout and Yelling Beavers. The team members are as follows:

The teams are first created by Leafy and Pin but the names were chosen by The Announcer. In "Puzzling Mysteries" the Squashy Grapes, after winning the challenge, get Firey on their team. In "Insectophobe's Nightmare", Blocky rejoined causing the Squashy Grapes to have twice as many members as the Squishy Cherries, this caused the Announcer to divide the Squashy Grapes into another team, thus forming the team Another Name. In "A Leg Up in the Race" the teams officially disbanded.

The teams in the first season are:

Squashy Grapes (at Episode 1b)

Squishy Cherries (at Episode 1b)

Another Name (at Episode 9)

In Episode 1 of BFDIA Tennis Ball suggested that one team have newbies, and the other have veterans, Donut noted that their team was smaller causing everyone on his team to switch. He did, however, get Coiny and Pin to switch. In "Get Digging", after Donut's elimination, Coiny gets Teardrop to join W.O.A.H. Bunch. In "Insectophobe's Nightmare 3", Coiny gets Needle to join W.O.A.H. Bunch. In Episode 4, after Teardrop's elimination, Coiny and Pin get Bomby and Yellow Face to switch from Team No-Name to W.O.A.H. Bunch. In "Get in the Van" after Pin and Yellow Face get Spongy and Nickel to switch, Golf Ball makes No-Name swear to never switch, however, Pencil, Ruby, Book, and Ice Cube don't comply and form FreeSmart with Match and Bubble.

The teams in the second season are:

The following team members are as of "Get in the Van":

FreeSmart (formed in "Get in the Van")

In episodes 1 through 16 of Battle for BFDI, there are 8 teams of 8 contestants each. The teams are:

In Battle for BFB, there are 2 teams of 7 contestants each. The teams were first called "Four Colored Team" and "X Colored Team".

In "Take the Tower" and onwards, the team names changed to:

They were called that because Have Cots won that challenge and Have Nots lost. Balloony was eliminated before they changed the team names.

The following team members are as of "X Marks the Spot":

In "The Game Has Changed", the teams disbanded.

In "B.F.B. = Back From Beginning", an alliance named Newbie Alliance becomes an actual team, but gets disbanded before the episode ends.

There are 6 teams of 7 contestants each. The teams are:

The following team members are as of "You Know Those Buttons Don't Do Anything, Right?". 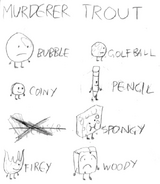