Start a Wiki
watch 01:39
Who is Teardrop?
Do you like this video?

In BFB, Teardrop is on

Teardrop appears to be a drop of lacrimal fluid, the fluid produced when eyes water, cleaning pathogens. Her outline is cyan, and her inside is azure, which gets lighter towards the center. When Teardrop is at her evaporation stage, she is a very light azure, which is hardly seen.

Teardrop's personality is/has been shrouded in mystery as she is either unable to speak or prefers not to do so. However, she is portrayed as slightly competitive and fairly smart. Teardrop can also be considered enthusiastic and impulsive, as seen in "Take the Plunge: Part 1", when she kicked Woody without thinking about the consequences, and when she pushed Rocky from the balance beam at full speed, causing her to fall off. In "Today's Very Special Episode", this is showcased when she excitedly jumps at Four in an attempt to make over him. Her impulsiveness is also demonstrated in "Zeeky Boogy Doog", when she quickly chose the HPRC over the immunity into the final 15 without even thinking twice, after being told she didn't need it. This also shows how she isn't hard to persuade. She tends to get picked on and hassled by the other contestants because she doesn't speak. She seems to often be uncontent with her inability to speak and also doesn't do so even when it puts her in danger, such as when Liy attempted to make her speak by forcing Ice Cube to wiggle her vocal cords, which clearly caused Teardrop discomfort. This shows that she likely doesn't choose to remain silent.

One of Teardrop's signature characteristics is her inability to speak. She communicates with facial expressions, gestures, and movement. She often is teased or hassled by her colleagues many times due to this.

At the beginning of "Take the Plunge: Part 1", Woody shows his crush on Teardrop, to which she responds by angrily kicking him far away. Tennis Ball tells her to calm down and comments that since Woody is made of balsa wood, a kick could severely injure him. In "Take the Plunge: Part 2," Teardrop is chosen for Leafy's team. She later becomes angry at Leafy for calling her "The Silent Type."

In "Barriers and Pitfalls", Teardrop is safe at no votes at Cake at Stake, along with Leafy, Needle, Ice Cube, Rocky, Coiny, and Snowball. She is later seen jumping over a hole with Firey and Coiny. At the end of the obstacle course, she helps Needle get water in the Squashy Grapes' bucket, causing the Grapes to win.

In "Are You Smarter Than a Snowball?", Teardrop is not seen for most of the episode, but she completes the test and gets 15 out of 20 questions correct. Due to Blocky and Pen cheating, the Squashy Grapes win the challenge.

In "Sweet Tooth", Teardrop is seen with Pin, who is making her Flower Cake. Teardrop appears skeptical about this, but Pin reassures her that she'll at least get 10 points from Flower.

At the beginning of "Bridge Crossing", Teardrop is blown away by the wind (from Needle's cake in Sweet Tooth), and is caught in a tree. She then is seen with Pin, and the latter asks her "What?". Teardrop is then mentioned when Coiny that Snowball won't throw her off the cliff.

In "Power of Three", Teardrop is grouped with Leafy and Tennis Ball. She then is put on the bar and runs very fast. Later, TD, Leafy, and TB get 2nd place in the challenge, and they are flung away by the spring.

In "Puzzling Mysteries", Teardrop isn't seen much but is seen when the Announcer tells the Squashy Grapes to vote for a new team member onto their team. She has her mouth open, looking like she is screaming (she has no voice).

In "Insectophobe's Nightmare", Teardrop is picked onto the Squashy Grapes for the 2nd time, and she is tied up in the ball with Leafy, Ice Cube, and Blocky during the challenge.

In "Crybaby!", Teardrop is eliminated from the competition, meaning she cannot win Dream Island. Ironically, the contest immediately following her elimination was to cry the most water, which if Teardrop was not eliminated, she could've won the challenge for her team.

In "Half a Loaf Is Better Than None", Teardrop didn't do well in the bread contest, as she only gets 13 loaves in total.

In "The Glistening", Teardrop received the second most votes to rejoin at 148 votes. However, she was beaten by Flower, so Teardrop was sent back to the TLC.

In "Return of the Hang Glider", Teardrop didn't vote for anyone since she had no voice to vote with. After the Cake at Stake song, it showed her miming "Cake at Stake!" with the rest of the contestants. Firey later won and let Teardrop into the island, and she later helped Golf Ball find out who took Dream Island.

In "Yeah, Who? I Wanna Know", Teardrop received enough votes to join Season 2, with 585 votes and was placed 4th. Teardrop is seen in this episode but wasn't mentioned.

In "Get Digging", Teardrop is forced over to the team W.O.A.H. Bunch by Coiny and Pin. She looks like she wants to say no, but being voiceless, it serves no purpose. Later, Teardrop runs into a high five with Pin and Coiny, and the two say it was not meant for her.

In "Insectophobe's Nightmare 3", Teardrop is in the challenge where the teams have to kill a swarm of bugs. She is poisoned during the challenge and was rendered dead until the next episode, where she is cured.

In "Zeeky Boogy Doog", Teardrop is recovered with a dose of anti-poison from Gelatin, although Nickel injected it. Then she eats Nickel due to its side effect. Shortly after, she has the choice to win either a Hand-powered Recovery Center or immunity into the final 15, and then Pin tells Teardrop that "everyone loves her" and she does not need immunity, so she decides to get the HPRC that was later destroyed. She received the most likes, but, getting 440 dislikes as well, she was eliminated. Teardrop's elimination was unexpected but done on purpose, because Jacknjellify made Teardrop pick the HPRC when they knew that Teardrop would be eliminated.

In "Getting Teardrop to Talk", Liy and Ice Cube attempt to wiggle Teardrop's vocal chords to make her talk, which fails. It is also shown that she waves her arms rapidly when she wants something or is happy, like when Lollipop offered her Fork Repellent, or when Eggy told Teardrop she understands her. However, this is misinterpreted by Pillow, along with several others, to signal that she doesn't care.

In "Lick Your Way to Freedom", Teardrop appears inside of the jawbreaker licked by Team Ice Cube. Bracelety had hoped that Ice Cube was inside, but saw Teardrop instead, so she got upset. Barf Bag told Teardrop she wasn't going to hurt her, and Teardrop ran back to her team with an evil smile on her face.

In "Today's Very Special Episode", Teardrop drew a simple number 4 for the contest, and as a result her team was the first to complete the challenge. Despite finishing first, her team placed 2nd in the challenge, behind Free Food. At the very end of the episode, Eggy decided to tell Teardrop her story that was mentioned in "Getting Teardrop to Talk", signifying a blooming friendship between the two.

In "Four Goes Too Far", Teardrop confusedly stares at Donut when he introduces the Twinkle of Contagion. Later on, she, along with the rest of her team, hitches a ride on A Better Name Than That's spaceship to the moon. She is then shown to be happy when the twinkle leaves the moon and returns to Earth, but upset when the spaceship falls over. During the stinger, she is seen on top of Basketball.

In "Enter the Exit", in an attempt to bring Four back, she draws the number 4 on numerous pieces of paper.

In "Get to the Top in 500 Steps", Teardrop appears in the stinger with Pin and Needle when Needle becomes CGI. She appears concerned for her friend.

In "What Do You Think of Roleplay?", Teardrop correctly points at "Taco", who was really Pin, as the impostor after she said to guess Teardrop.

In "Return of the Rocket Ship", Teardrop can be seen walking torwards Saw before she starts screaming, turning around when Saw starts to scream.

Teardrop can later be seen in the episode staring at a box of shovels, and then she can be seen attempting to lift a shovel from the blade.

Teardrop is a mysterious character. That's because she doesn't want to, or cannot, speak.

She can be impulsive, as she was when she kicked Woody without thinking of the consequences. She fell off a balance beam when she pushed off someone else. Teardrop is also smart and competitive.

Teardrop is one of the most divisive characters, with campaigns to both keep her and to eliminate her running strong in 2012. The elimination campaign won.

You Don't Say!: Teardrop has spoken as many times as Roboty's chest compartment has been opened. 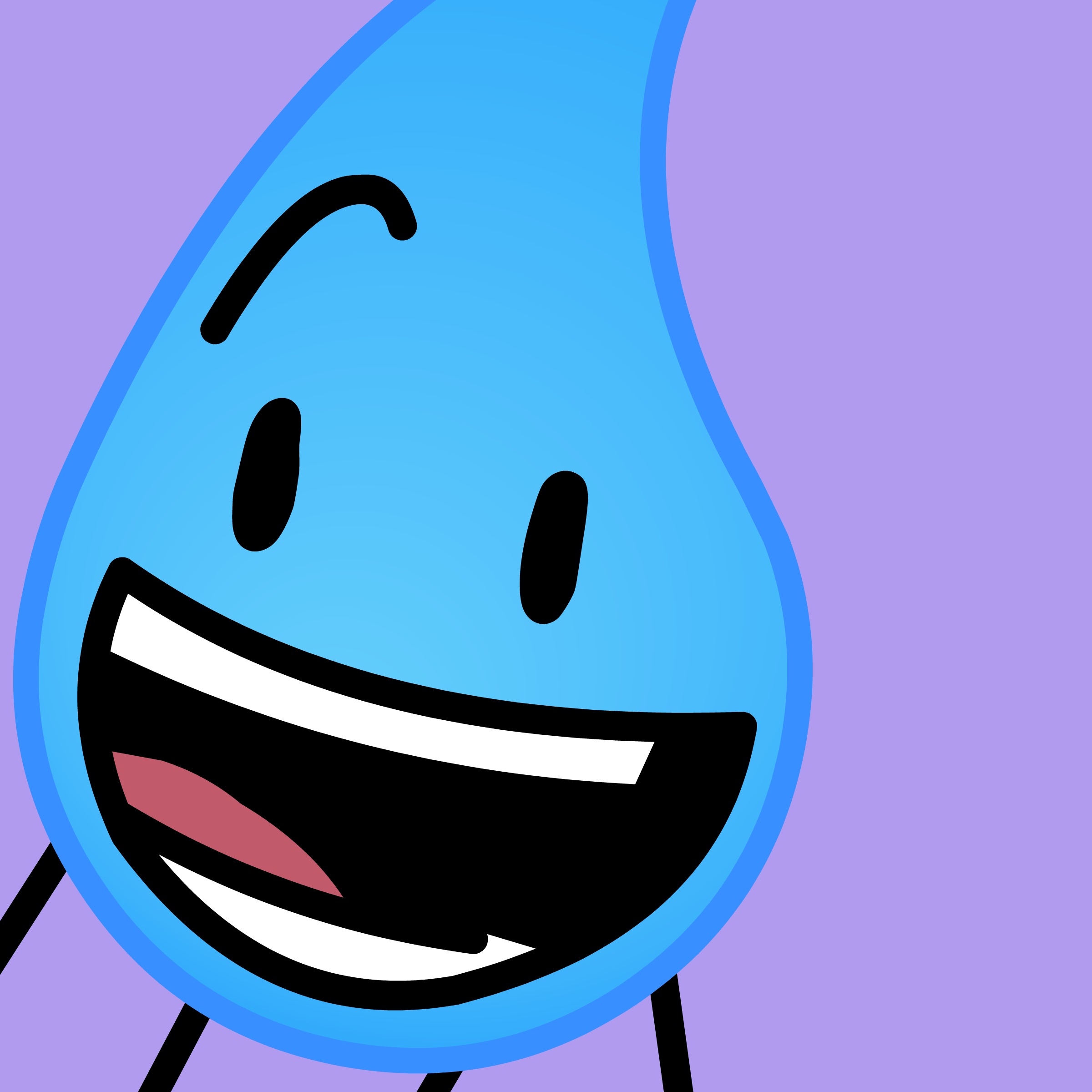 Characters
Retrieved from "https://battlefordreamisland.fandom.com/wiki/Teardrop?oldid=1391264"
Community content is available under CC-BY-SA unless otherwise noted.