Battle for Dream Island Wiki
Register
Don't have an account?
Sign In
Advertisement
in: Pages or sections out of order, Numbers, Characters,
and 6 more

Ten is an integer who first appeared in "SOS (Save Our Show)" as a recommended character. They later appeared in "Thanks for 1,000,000 subscribers!". They are voiced by Bryan Ndubisi, AKA PhoebeBebe.

Ten is an Arabic numeral ten having an orange body and lighter-colored limbs. They also have two white eyes with black pupils, and a mouth. The 1 is covered by the 10 and the 0's hole is replaced by their left eye.

Ten is a passionate integer who is usually friendly to their numeric friends. They seem to enjoy the taste of key lime pie and watching TV. Ten also enjoys helping out others, shown by them saving Nine's cat, Six's cat, and Seven from trees. They also helped them with the sub count situation. Ten also enjoys the spotlight, seen by their happy reaction to everyone being happy they're around, and saying they're happy to have the spotlight on him in jacknjellify's sub count.

In "Thanks for 1,000,000 subscribers!", Ten was one of the two prizes of the mini-season "Battle for Permission To Meet Ten", the other prize being 99 trillion dollars. There was no voting, nor teams. 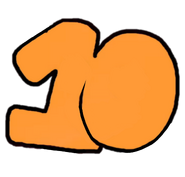 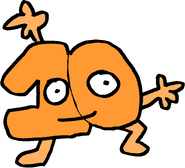 Because we've got our own style...

Ten in the sub count along with many Zeros

The numbers cheering for 10

Ten rescuing Seven from a tree 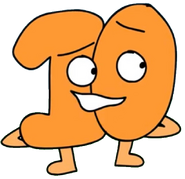 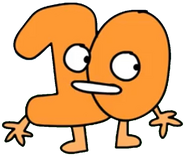 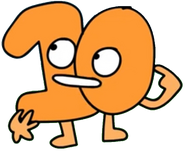 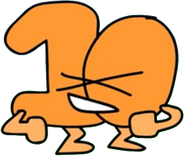 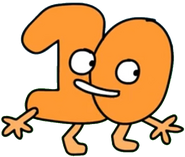 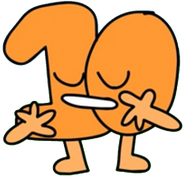