Thanks for 4 years! is a short video in which Pen thanks the viewers for their continued viewership with BFDI for 4 years. It is the first BFDI short uploaded to jacknjellify.

The video starts with the same "Happy birthday, BFDI!" circling-around-the-cake animation used in Don't Lose Your Marbles and Get in the Van, but then Pen jumps out, stops the animation, and thanks to the viewers for watching BFDI for 4 years and all of the support. As Pen finishes his last line in the video, the Happy Birthday circle catches on fire and drops down onto Pen as the screen fades to black, showing a card that says "Thanks for 4 years". Snowball screaming can be heard as the video ends. 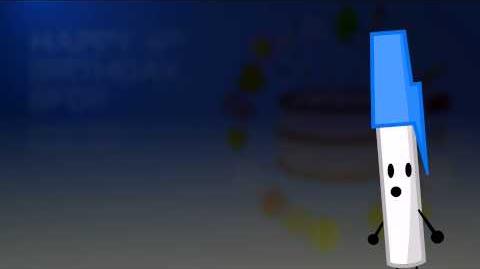 Thanks for 4 years!-0
The video

The wheel catches on fire

Pen being flung from the wheel