Battle for Dream Island Wiki
Register
Don't have an account?
Sign In
Advertisement
in: Pages or sections out of order, Places, Season 1 places,
and 4 more

A Better Name Than That and

The Moon is a celestial body in the Earth system. The Moon is not in orbit around the Earth, but instead, Earth and the Moon are in binary planetary system, as stated in "Sweet Tooth" (or triple planet system in that situation).

It has no atmosphere and it is very easily viewed from the Earth's surface, as it is only 400,000 kilometers away (or directly in contact with Earth from "Questions Answered" onward).

It plays a significant role in "Four Goes Too Far", where A Better Name Than That rides in Golf Ball's rocket to the Moon to avoid the Twinkle of Contagion, while

latches on and follows.

Taco lets go of the rocket and falls back to Earth mid-flight. After they land on the Moon, the rocket malfunctions resulting in

and A Better Name Than That being unable to return. They were stuck there until "Questions Answered" when Donut united the Earth and the Moon by squishing the Earth through a camera that was capable of transporting matter.

The Moon is currently in contact with the Earth.

In "Bridge Crossing", both the Earth and the moon were attracted to Needle's Cake, but then Needle's Cake got popped by Needle

It appeared in the night sky in "Don't Lose Your Marbles" and "Reveal Novum".

In "Get Digging", it was seen when Puffball was flying over the Goiky Canal, and multiple moons were seen when they were flying over a planet land.

In "Four Goes Too Far", A Better Name Than That went to the Moon with Golf Ball's rocket to escape the Twinkle of Contagion,

grabbed onto their rocket too. Then they stared at each other to make the twinkle pass to each other, then Taco tells Bell to look at the Moon, causing her to get the twinkle. The rocket then breaks.

In "The Liar Ball You Don't Want", A Better Name Than That and

are still on the Moon, they use Robot Flower to control Remote, but fail, which means A Better Name Than That is put up for elimination.

In "Questions Answered", Donut makes the whole Earth go through his camera, causing the Earth to be on the Moon. Then, 8-Ball was crushed between the Moon and the Earth for his elimination punishment.

In "This Episode Is About Basketball" and all subsequent episodes, the Moon appears occasionally in the background, appearing very large and close to the Earth due to the events that occurred in "Questions Answered".

In "Return of the Rocket Ship", Golf Ball told Robot Flower to get her broken Rocket Ship where it is still on the Moon. Which then she went to the Moon and carried the Rocket Ship back to the Earth.

The Moon has been spotted in "How Loe Can You Grow?" after being absent for 5 episodes.

The Moon surface varies from light gray rocks to dark gray rocks and has many craters on it from many asteroids and other space objects hitting its surface.

The Moon, or at least the part that A Better Name Than That and

visited, did not have any mountains, while the surface itself is quite rough with many several meter high extrusions and craters coming out of the ground. Similar to the natural moon in our solar system it has a rockish tint to it.

ABNTT and Bleh land on the moon.

Earth and Moon being united 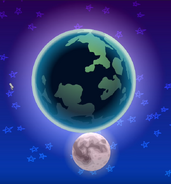 8-Ball being squished between the Earth and the Moon.

The Moon in the background. 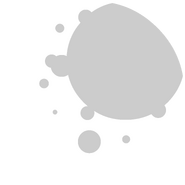 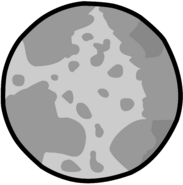