The Sun is a star located in Space. Earth and the other planets in the solar system orbit the Sun.

It played a significant role in "How Loe Can You Grow?" and a major role in "A Taste of Space".

The Sun first appears in the first episode, "Take the Plunge/Part 1", as a background effect. It appears in some more episodes with little to no role.

In "Don't Lose Your Marbles", the Sun is shown rising at the end of the contest.

In "The Reveal", it is used to tell who gets a penalty or not when it sets.

In "Reveal Novum", it brings the TLC out of the lake when rising. It crushes the LOL in the stinger.

In "Insectophobe's Nightmare 2", it gets teleported into the TLC.

In "Lick Your Way To Freedom", the Sun appears as a recommended character while Donut was flying over to his team.

In "How Loe Can You Grow?", the Sun played a significant role in the episode, as part of the challenge. The Have Nots made the Sun hotter with a laser to help X's aloe vera plants grow faster with more sunlight, deeming them safe for the episode.

The Sun played a major role in "A Taste of Space". The Have Cots were on it for a majority of the episode, thinking of ways to cool down X for the challenge, still being on fire since the last episode. At the same time, the Have Nots also tried to affect the Sun's heat, but from Earth.

In "Chapter Complete", Four flies the BRB onto the Sun and sinks into it.

The surface of the Sun

Have Cots on the Sun 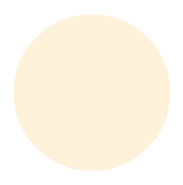 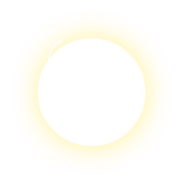 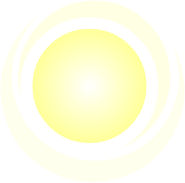 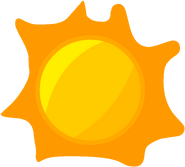 The Sun in BFDI 4 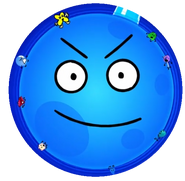 Four as a sun