The Tiny Loser Chamber, abbreviated as TLC, is a container used to hold various characters and objects throughout the Battle for Dream Island series. It is a large grey lidded metal box with its name written on the side. Its walls are five inches thick. The Tiny Loser Chamber's lid opens for five minutes every day.

In "Reveal Novum", the eliminated contestants accidentally send the Tiny Loser Chamber into a lake; they are subsequently saved by sunrise.

In "Hurtful!", Firey's replacement box smelts down the contestants, who are metal due to a side effect from the yoyleberries, and fixes the TLC, re-scribbling LOSER onto the middle in red print.

In Battle for Dream Island Again, the Tiny Loser Chamber is used to contain non-participants. It is kept inside the Locker of Losers for extra protection.

In "Welcome Back", the characters agree to use a Wall Teleporter to extract the Tiny Loser Chamber's prisoners.

Characters inside of the TLC as of Welcome Back 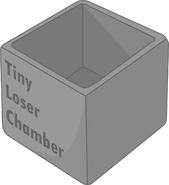 The inside of the TLC

Coiny talking to Blocky in the TLC

The Tiny Loser Chamber in Episodes 21 and 22 (cut in the middle, making it the T.C. (Tiny Chamber))

The TLC in BFDI's third-anniversary cutscene

The TLC located in the LOL