BFB: "The Escape from Four"

Tree is a male contestant in Battle for BFDI and The Power of Two. He is one of the former 30 recommended characters featured in "The Reveal" that could have joined the game. Along with Saw, Naily, and Barf Bag, he got 3 votes in "Reveal Novum" and was flung into the Locker of Losers.

Tree had a chance to join BFDIA but only got 49 votes and was sent to the TLC.

Tree gained limbs in his IDFB design, along with a thinner trunk, and leaf details, and a more solid foliage structure. Tree, along with the other TLC prisoners, had the chance to join IDFB, but he didn't rejoin with 46 votes, being tied with Saw.[1]

Tree previously competed in BFB on the team Death P.A.C.T., but in "The Escape From Four", he switched to TPOT and will soon be competing in said show.

Tree appears to be a deciduous tree.

His trunk is beige and his leaves are green, lime, and dark green.

Tree is stern and reasonable, as shown in "Today's Very Special Episode" when he scolded Pen for immediately going to Black Hole to ask him for help with the challenge. He also refused to help Liy make Teardrop talk, in "Getting Teardrop to Talk".

Despite this, he is not a very active competitor, mostly turning to Black Hole for assistance in challenges. He was also seen to be a hypocrite for scolding Pen for asking Black Hole first.

Woody and Pencil are parts of trees, but Tree is the real thing. He is a tree with leaves, although he seems to be evergreen. It doesn't matter. Tree is not anchored by roots, but he thinks of himself as a with-it-down-to-earth type of guy; only Loser's charming charisma can sweep him on his feet.

When he sees a problem, Tree knows what not to do, although he hasn't a clue[sic] on what he should do. When Tree is fed up, he'll walk away and tell people that he is "leafing".

Did You Know?: Tree is a non-coniferous evergreen.

Tree's asset first appeared in "Bridge Crossing", as the tree that Teardrop broke in the windstorm. Later, it was used as the tree to put the ICRC on, as a part of a prank in "Cycle of Life". It was used again as the trees blocking the path down the water in "Reveal Novum".

In "The Reveal" audition, the Announcer stabbed Tree with a knife during Cake at Stake, and later in the audition, Tree is seen wiggling side to side, making a rustling leaves sound effect.

In "Reveal Novum", Tree, along with Naily, Barf Bag, and Saw, only got 3 of the 450 votes which is 0.88% of the votes. That was certainly not enough to join the game and the 4 characters were shot into the Locker of Losers.

In "Yeah, Who? I Wanna Know", Tree got 49 votes, failing to make it into BFDIA and was once again flung to the LOL.

He is one of the many prisoners in the TLC that can be freed in "Welcome Back".

In "Getting Teardrop to Talk", he is first seen asking Loser to greet him, and shortly after Tree says that Loser is his hero. Tree is drawn away from Loser's presence by Liy, whose quest is to make Teardrop talk. Tree thinks that making Teardrop talk isn't worth his time, and after she explains her plan to him, he "leafs".

He is seen later with Bottle, who both join Death P.A.C.T.. Tree tells Four to "quit [his] shenanigans", but is dismissed. Clock would suffer the same fate right after. He doesn't do much during the challenge, but Pen blows one of X's baskets back to him, deeming his team safe, the first in the season.

In "Lick Your Way to Freedom", during the challenge, he tells Black Hole to do "the thing". They free Foldy.

In "Why Would You Do This on a Swingset", Tree asks Black Hole to swing them, but he declines to do so. Tree tells Black Hole to instead "do [his] pully-attracty stuff".

In "Today's Very Special Episode", he tells Pen off for trying to ask Black Hole again, telling him he shouldn't "turn off [his] ballpoint brain and ask [Black Hole] every time", and telling him that a "true winner" does their research, which is all about asking Black Hole for help if there's a problem. When Gelatin's Forks fly towards Four, Tree and some other members of Death P.A.C.T. use their bodies as a shield to protect Four, but a fork passes through; said fork is caught by Woody, presenting his team's creation.

He is seen later as they are caught in the barrage of forks, saying that Black Hole can suck up the forks. Pillow's sacrifice helps Tree, Pen, Remote and Bottle get to Black Hole. Pen's quick "4" put them up for elimination.

In "Fortunate Ben", Tree tries to rhyme Four's sentence, ordering Death P.A.C.T. to assemble for Cake at Stake, but is screeched at, while X says that Tree's sentence doesn't rhyme. Later, he is safe and reads out his fortune. Tree then proceeds to ask Four where he got the "fortunes", with Four answering "dumpster". His team never hit the ground during the challenge and was safe from elimination.

In "Four Goes Too Far", like most of the other objects, he first appears in the heart scene. He forms a plan, telling his team to cover his eyes to avoid the Twinkle. He reminds them to keep their eyes closed when Pen wants to open them to see what is making a sound. He isn't seen for the rest of the episode.

In "The Liar Ball You Don't Want", Tree somehow gets forced into Bottle during the challenge offscreen. He asks someone to get him out of Bottle, but nobody comes to help him. He isn't seen for the rest of the episode.

In "This Episode Is About Basketball", Pen and Pillow are mad at Tree for not helping the team, when in fact he is stuck inside Bottle and can't do much. This episode revealed that he is the best thrower out of the current Death P.A.C.T. members.

In "Get to the Top in 500 Steps" Tree can be seen halfway out of Bottle and demanding her to get him to Four to recover Pie.

In "What Do You Think of Roleplay?" Taco takes over the body of Tree, while Tree is eventually revealed to had taken over Spongy's body. While in Tree's body, Taco demands Death P.A.C.T. to get him out of Bottle. When Pie tells Tree to wait, she flips over Bottle, smashing and killing her. This also means Tree is out of Bottle. Due to killing a member, Death P.A.C.T. instantly figure out Tree had been replaced, meaning Tree's team is safe. Taco is then shifted to her usual self.

Tree himself, in the guise of Spongy, stays relatively quiet during this challenge, only responding with "Yeah!" to Barf Bag when she asks "Spongy" if she's right. Naily becomes suspicious that Spongy is fake considering he's just been sitting down, but Barf Bag says it's usual for him. When Team Ice Cube can't figure out the faker on their team before the others, Tree is shifted back to his body, having successfully won.

In "Return of the Rocket Ship", Tree appears with Death P.A.C.T. when Black Hole calls out his own team.

Later, Tree tells Four to recover Pillow, but Four then states that Pillow is not dead. Tree points out that Pillow was consumed by Four and suggests that Pillow has been digested, but Four denies that Pillow was digested. This deeply confuses Tree and forces him to state that his team has to go investigate Four's mouth. Tree attempts to force Four's mouth open, but it doesn't budge. Pen then insults Four by stating Five is greater than Four, causing Four to screech at Death P.A.C.T. and inhale the entire team in, including Tree.

In "Don't Dig Straight Down", Tree reaches his arms out of Four's mouth for the emerald A Better Name Than That found.

In "The Four is Lava", Tree, along with the other Death P.A.C.T. members, are seen inside The Fourest. Tree questions Black Hole why they aren't leaving, since they found Pillow already. Black Hole tells him that since Remote is so happy and is having fun sticking her hands out of Four's mouth with Bottle and Pen, they don't have a reason to leave so soon. Tree tells him he wanted to be outside in the sun, not in Four's disgusting body.

In "The Escape From Four", Tree is first seen when Four is struggling to suck up Spongy. He notices that something is happening before the exitors emerge from Spongy's holes. Loser jumps out and Tree is one of the many contestants to be thrilled to see him. When Four starts to suck the exitors back inside, Tree tells everyone that they need to stand up for their fellow contestants, and helps with pulling them free.

Later after Two's arrival, he, along with all the other contestants watch Two use his powers to take lava out of Yoyle Mountain, and shapeshift it into a two shape. When everyone is switching to Two's show, Tree is skeptical after seeing Two move a forest, asking why he would need to move one when he could just walk. In response, Two creates a spike ball out of the sun, and starts hitting Four with it. This convinces Tree to switch to TPOT, saying that's "impressive as bark", to which Pillow replies that bark isn't impressive.

In "X Marks the Spot", he is in the crowd of TPOT characters who gasp when X is lassoed away by the Four Colored Team. 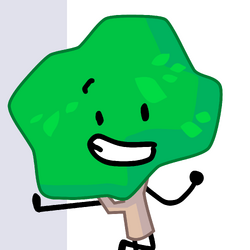