< Tree
View source
watch 01:55
Cobra Kai Season 4 - The Loop
Do you like this video?
Play Sound

This article focuses on the interactions between Tree and the other characters.

Tree usually acts stern but reasonable towards others, however he can unintentionally come off as being rude to his friends and teammates.

In "The Reveal", he's hit by a knife thrown by the Announcer.

In "Reveal Novum", he attacks the Announcer when he learns that he didn't get enough votes to join BFDI.

In "What Do You Think of Roleplay?", while disguised as Spongy, whenever Barf Bag asked him a question, Tree only said "yeah" in response, which fools Barf Bag and the entire team.

In "Lick Your Way to Freedom", "Why Would You Do This on a Swingset", and "Today's Very Special Episode", Tree asks Black Hole to do the challenges. Tree also stated that Black Hole could suck up the forks.

In "Fortunate Ben", he gives Black Hole a very strange look when he's about to obliterated by Four.

In "Get to the Top in 500 Steps", he watches as Black Hole saves Bomby's life.

In "Return of the Rocket Ship", when Black Hole convinces his team that they need to recover Pillow, Tree asks Black Hole if they should get Four to bring her back.

In "The Four is Lava", Tree asks Black Hole if he thinks they're wasting time since they already found a way into Four's mouth and could've left at any time. Black Hole responds that they could just take their time since they found Pillow, along with how happy Remote is. Tree is annoyed at his response as he'd much rather be out in the sun instead of staying in the The Fourest.

In "You Know Those Buttons Don't Do Anything, Right?", Tree accidentally drops his megaphone in Black Hole and wishes that he could have dropped it beside him in order to get his attention. He then uses Remote's battery as a way to get his attention, which works.

In "Getting Teardrop to Talk", when Bottle says the world needs more people who are against killing, Tree says he agrees. Later when Bottle creates their team name, Tree smiles at her.

In "The Liar Ball You Don't Want", Tree somehow gets stuck inside Bottle during the challenge. It is still unknown how Tree was able to get stuck there in the first place. Tree himself didn't seem to harbor any negative feelings towards Bottle during the four episodes that he was trapped in her, though he looked angry about it in the "Enter the Exit" intro, but given that it's the pose he makes in the intro, it's likely meaningless.

In "Get to the Top in 500 Steps", Tree is still stuck inside Bottle, but has made progress in getting out without resulting in breaking out. This shows that Tree cares about the well-being of Bottle. Tree then commands Bottle to walk over to Four so that they could revive Pie, Bottle complies.

In "Return of the Rocket Ship", Tree asks Four to recover Bottle.

In "You Know Those Buttons Don't Do Anything, Right?", when Bottle leaves the team in favor of one that has more fun, Tree says that she can't be serious, but Bottle says that she is, making Tree facepalm in response. 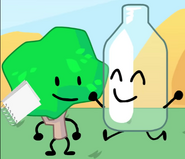 In "You Know Those Buttons Don't Do Anything, Right?", Tree enjoys having Fanny's propeller blown on him.

In "Getting Teardrop to Talk", when Four suddenly stops talking and doesn't answer anyone's requests to start the first contest, Tree tells him to quit his shenanigans and is promptly screeched by Four.

In "Today's Very Special Episode", Tree helps block the forks from hitting Four from fear of being zapped to death.

In "Fortunate Ben", when Four runs out of words to rhyme assemble with, Tree asks "Assemble or?", this makes Four screech him. When Tree reads his fortune, he asks Four where the fortunes came from.

In "Get to the Top in 500 Steps", after sitting through Four and Bottle's conversation, Tree tells Four to recover Pie.

In "Return of the Rocket Ship", when Four has Pillow in his mouth, Tree tells Four that he hopes he doesn't swallow only for Four to swallow Pillow, which makes Tree give Four a disgruntled look. When the contest starts, Tree asks Four to recover Bottle. Later when the team asks Four to recover Pillow, Four tells them she isn't dead. Tree tries to make sense of this by asking that if she was eaten, she'd be digested. When Fours says that isn't the case, Tree sighs and decides his team will have to just investigate Four's mouth, he then struggles to pry Four's mouth open.

In "The Escape from Four", it is Two using a spike ball (which they turned the Sun into) to injure Four that convinces Tree to join Two's show (although it is possible Tree was simply impressed by Two's ability to transform the Sun into a spike ball). 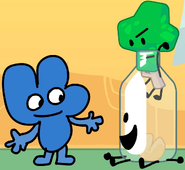 Tree may not like Gelatin for killing Pie and Pen with forks. He also smiles as the forks that Gelatin throws are deflected by the fork repellent.

In "Getting Teardrop to Talk", Tree does not want to be part of Liy's plan to make Teardrop talk and ends up leaving the scene. Later, he's invited to the team by Liy.

When Liy was eliminated in "Fortunate Ben" and was about flipped her switch, Tree pleads with her not to. Tree thought it was creepy and asked Four to suck her up.

In "Getting Teardrop to Talk", Tree asked Loser to greet him. After Loser acknowledges Tree's request and responds with a greeting, Tree calls loser his hero.

In "The Escape from Four", Tree is in awe of Loser's presence when he pops out of Spongy.

In "What Do You Think of Roleplay?", he is stabbed by Naily while he's disguised as Spongy, he doesn't seem to mind it though.

In "Getting Teardrop to Talk", when Pen says their team needs a name, Tree says he doesn't have any ideas.

In "Why Would You Do This on a Swingset", Tree is the only member of Death P.A.C.T. who is happy to see Pen and Pie recovered.

In "Four Goes Too Far", when Pen hears a noise, Tree reminds his team to keep their eyes closed, not that Pen listens.

In "This Episode Is About Basketball", while he was stuck in Bottle, Pen starts blaming him for not doing the challenge. Tree responds in a muffled and annoyed tone that he's trying. Later on, Pen says that it's clear that they can't rely on Tree to do anything, and Tree is visibly sulking.

In "Return of the Rocket Ship", when Tree tries to open Four's mouth, Pen tells Tree to step aside and Tree watches as Pen manages to get Four to open his mouth.

In "You Know Those Buttons Don't Do Anything, Right?", Tree remembers that they only took Pen in when he was the last one picked, and doesn't seem to mind when he leaves.

Status: Friends (most of the time)

In "Why Would You Do This on a Swingset", Tree is the only member of Death P.A.C.T. who is happy to see Pie and Pen recovered.

In "Get to the Top in 500 Steps", Tree tells Four to recover Pie after she was killed by Flower in the contest.

In "Today's Very Special Episode", Tree tells Pillow she can't be serious about blocking all of the forks by herself and gets upset when she interrupts by telling them to go.

In "This Episode Is About Basketball", while he was stuck in Bottle, Pillow tells him to pull his weight in the challenge.

In "Return of the Rocket Ship", when Pillow is being screeched while in Four's mouth, Tree says that he hopes Four doesn't swallow. when Black Hole reminds his team that Pillow died, Tree starts arm waving, meaning he doesn't care, though he is never actually seen doing so. When he and the team realizes they should be caring about Pillow's death, they try to get Four to recover her.

In "The Escape from Four", when Tree calls one of Two's tricks "impressive as bark", Pillow adds that bark isn't impressive. Tree tells her to shush.

In "You Know Those Buttons Don't Do Anything, Right?", Tree wonders where Pillow ran off to when she disappears from the team.

They don't interact with each other that much in BFB but are still friends since they are on the same team.

In "Fortunate Ben", Tree watches Remote as she reads her fortune.

In "You Know Those Buttons Don't Do Anything, Right?", when Remote is explaining her strategy to her team, Tree asks if it would be too slow, but Remote tells him to just let her finish. Later, he complains when Remote tells her team to climb the last few flights of stairs. When they reach the top, Remote pulls Tree to the edge to call Black Hole, only to remember that he has bad hearing. Tree tells her not to worry since he has a megaphone, and Remote points out that she gave it to him. When Remote sacrifices herself in order to use her battery as something to get Black Hole's attention, Tree tells her that he won't let it go to waste and successfully uses it to get Black Hole's attention.

In "You Know Those Buttons Don't Do Anything, Right?", Tree uses Rocky to barf on Two.

In "The Escape from Four", when Ruby gets scared, she holds on to Tree's arm. Tree doesn't seem to mind.

While the two haven't interacted once, Tree tells Liy that he thinks getting Teardrop to talk isn't worth any effort.

In "The Escape from Four", when Two shapes some lava into a two, Tree can be heard saying "Bravo, very well executed". Tree then tells Two that he isn't convinced by his ability to move a forest, since he could just walk. In response, Two turns the sun into a spiky ball, which he uses to hit Four. Tree calls that "impressive as bark" and switches to Two's show.

In "You Know Those Buttons Don't Do Anything, Right?", Tree yells at Two for not explaining one of the rules loud enough and has Rocky barf on them.

In "The Escape from Four", Tree is the one who tells everyone that they need to stand up for the eliminated contestants, and helps with pulling them out of Four.

When the team repeats the word "treason" because of Golf Ball drawing in the contest, Tree says "I'm in what?".

In "Four Goes Too Far", Tree tells the team to close their eyes so that they wouldn't get the twinkle. Strangely, no one on the team listens to him except Pie and then Pen later.

In "The Four is Lava", Tree looks at Bottle, Remote, and Pen with an annoyed expression when they chant for Black Hole to swing them back up to Four's mouth. However, in the shot showing the seven teams who aren't safe, Tree looks at the same trio with a satisfied smile as they have fun, possibly having an offscreen change of heart.

In "You Know Those Buttons Don't Do Anything, Right?", since they're one of the teams with seven members, Tree figures they could just stay together again for TPOT.