Battle for Dream Island Wiki
Register
Don't have an account?
Sign In
Advertisement
in: Recommended Characters, Characters, Appeared on BFDIA 5b,
and 4 more

1st (out of the recommended characters in BFDIA 3)

BFDIDubita23, pezzy (Pezzottalte)
Tune is a character recommended by BFDIDubita23, and the first ranked recommended character in Insectophobe's Nightmare 3. Tune is seen greatly engulfed in music, or whatever is playing in her headphones. Tune also made an appearance in BFDIA 5b, next to Waffle, where Tune can be used to get the Win Token on 047. Heading out. Tune doesn't talk very much, according to Waffle.

Tune appears to be a quaver, a musical note that is half a beat. She is black with gray shines for her main body and wears red headphones.

In "Return of the Rocket Ship", she returned with no major redesign, aside from having Check-it Eyebrows due to it being a recommended character in that batch.

In "Fashion For Your Face!", she returns with a new design. Her headphones are more three-dimensional, her note end no longer curves, and her end note and main body are separated via a black line.

In "The Worst Day of Black Hole's Life", she appears again in Two's imagination, except as a simple quaver without limbs, eyes, or headphones.

Tune's personality is mostly unknown. According to Waffle, she doesn't speak much, similarly to Teardrop.

She was the top ranking recommended character in "Insectophobe's Nightmare 3".

She appears with Waffle in BFDIA 5b as an NPC, but can be made playable via hacking.

She appears in the second crowd of recommended characters in "Return of the Rocket Ship".

In "BFDIA 5b", Waffle introduces Book to Tune. Match interrupts Waffle, and Book tells her to be nice. Since the game is unfinished, and Tune barely appears and talks, Book's and Tune's relationship with each other is unknown, because they haven't ever directly spoken to each other. 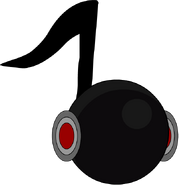 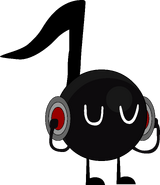 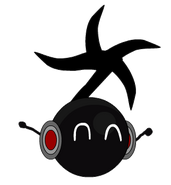 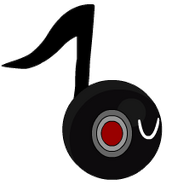 Tune walking (without arms and legs) 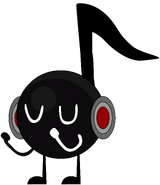 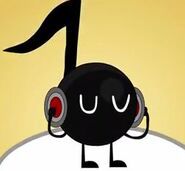 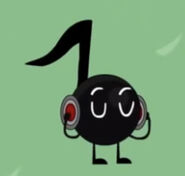